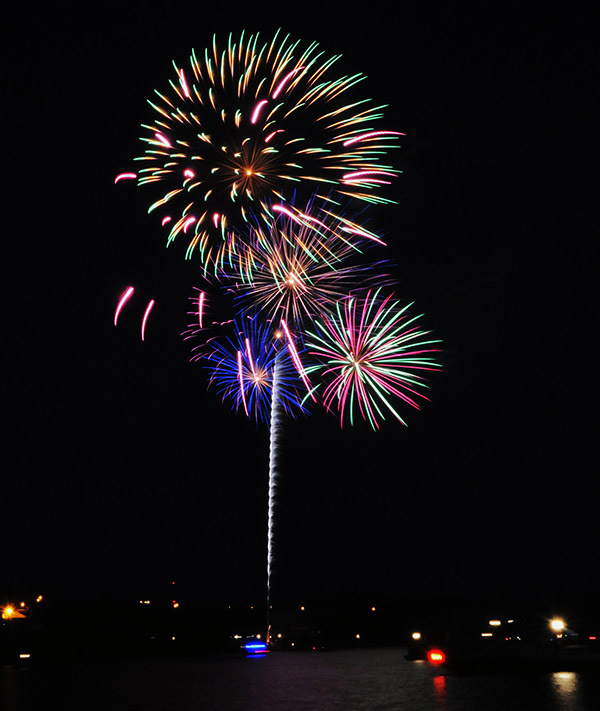 The Marble Falls Community Fireworks show will light up the skies over Lake Marble Falls about 9:15 p.m. July 4. Photo by Don Comedy

MARBLE FALLS — Celebrate the Fourth of July with Jeeps, country music and fireworks — it’s hard to get more American than that.

The Marble Falls Community Fireworks, which is fully supported by local businesses, organizations and individuals, gets going about 2 p.m. with vendors, fun and even bounce houses at Lakeside Pavilion, 307 Buena Vista Drive.

But along with those actives, the folks from Jones Jeep and Hidden Falls Adventure Park are hosting a show-and-shine. The event will feature some of the best-looking Jeeps around as well as other four-wheel-drive vehicles. Many of the Jeeps and other vehicles have been modified, or even built, for the extreme off-road adventures found at Hidden Falls Adventure Park and other off-road destinations.

As the afternoon continues, the Lake Area Rods and Classics will set up its show-and-shine at 4 p.m. at the pavilion. This show features, just as the name says, hot rods and classic cars.

But before you get ready to hit the road, there’s another truly American art form taking the stage at 5 p.m. It’s country music. This year, Luke Pell gets the music going with his country style influenced by some of the biggest names in the business.

At 6:30 p.m., the Hill Country Community Band brings the big band and other sounds to the stage inside Lakeside Pavilion.

Then, at 7:30 p.m. the Wonderfuls get everybody up and moving with their list of cover songs, which stretch the gambit from Daft Punk to Adele. Yeah, they’re a cover band, but that’s what makes them so fun and exciting. They perform a long list of selections from a wide variety of entertainers.

You’re guaranteed never to get bored when the Wonderfuls are on stage.

As the sun begins to dip below the horizon, it’s time to start gathering on the shores of Lake Marble Falls because at 9:15(ish) p.m., the fireworks erupt over the lake.

Before heading home after the show, consider supporting the annual Marble Falls Community Fireworks celebration to keep it going in the years to come. Officials say it costs more than $20,000 to put on the event, so even a donation of a few dollars helps. Go to www.marblefallscommunityfireworks.com for more information or to make a donation.