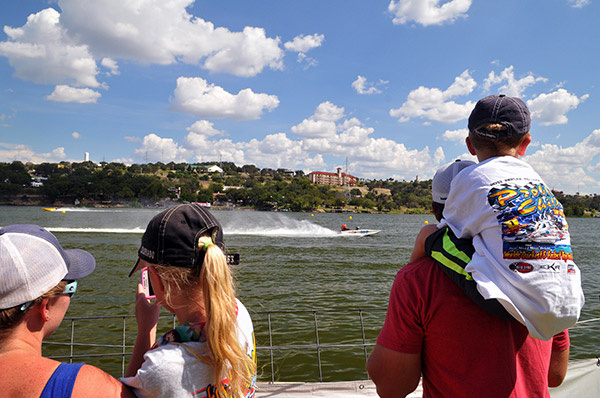 MARBLE FALLS — For three days, the fastest boats in the state and beyond descend on Lake Marble Falls. And you're invited.

LakeFest 2015 turns a quarter-mile of the lake into the fastest venue around Aug. 7-9.

This is the 24th year of the event, which continues to draw racing enthusiasts and fans in the thousands. While people can dwell on the economic impact of the three-day boat extravaganza, the best thing about it is it’s just fun.

The event is split over three days. The first day, Friday, Aug. 7, is Test & Tune. Racers and their crews hit the water to get the best performances out of their boats before elimination rounds on Saturday. And that’s just what Aug. 8 is. Two racers set up against each other on the line, and when the lights go green, they rip down the lake trying to beat one another and the clock.

And, oh, how that clock weighs on their minds.

With quick reflexes, a deft touch and the boat dialed in just right, racers advance to the finals on Sunday. And that’s just where they want to be with $100,000 of prize money on the line.

Throughout the weekend, fans line Lakeside Park, 307 Buena Vista Drive, where the incline offers the best seats in the house. And if they want a close-up look at the boats, fans can venture into the pit area at Johnson Park, 230 Ave. J South.

Whether an avid fan or just a curious person, LakeFest provides a great backdrop for fun. For those who just want a peek at the boats, the pit area is open to the public with free admission.

6-9 p.m. — Show & Shine in Johnson Park, 230 Ave. J South, with Allen Ray & Southern Comfort Band performing. The night includes a “fire-up” at dusk during which many of the top fuel boats crank up their engines and light up the evening.