A look back at LakeFest 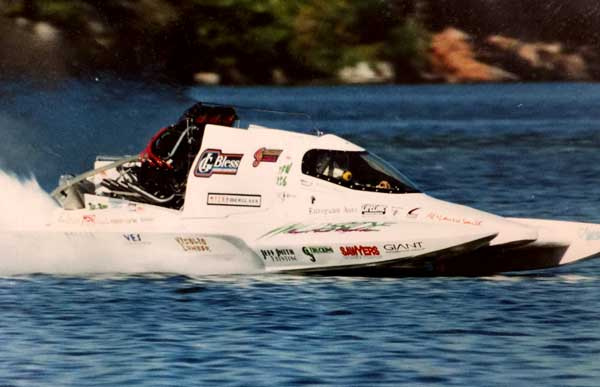 A racer takes part in a past Marble Falls LakeFest. The annual drag-boat races return Aug. 12-14 for the 25th year. Courtesy photos

A look back at LakeFest

MARBLE FALLS — When Barry Burton, John Kemper and Gary Ott pitched the idea of bringing drag-boat races to Marble Falls more than two decades ago, Donna Klaeger had a problem with the concept.

“I had to ask what a drag-boat race was,” she said.

Klaeger, Brenda Morris, Ken Dollar, Burton, Kemper and Ott were among the group of folks who ushered in the drag-boat races of LakeFest many years ago.

That first committee had some serious doubts they could pull it off.

“There was no way we should have been able to do it that first year,” Morris said. “The things that had to come together. If you asked me today, knowing what we had to do, I’d say there’s no way we could pull it off.”

The idea, something Burton proposed to Kemper at the Blue Bonnet Cafe after he attended a drag-boat race in Waco, sounded like a wild hair. But when Ott overheard the conversation, he added that he had helped during the Austin AquaFest drag-boat races, and the lightbulbs in their heads began beaming.

This all began in spring, around April, when the committee, which also included then-chamber president Glenna Yates and chamber member Joe Don Dockery, began meeting at Klaeger’s Meadowlakes home to start hammering out the plan.

“We did this in only four months,” Klaeger said. “And there was a lot of things that had to happen, a lot of people we had to get on board to get the boat races off in August.” 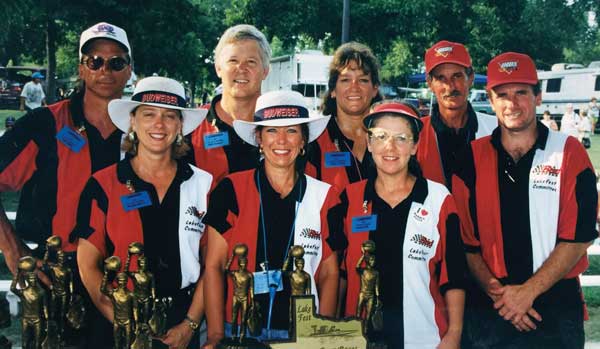 One of the earliest committees for the Marble Falls LakeFest drag-boat races.

“Oh, my, yes,” she said thinking back to those meetings, both with the committee and other involved parties. “There was the city, the (Lower Colorado River Authority …”

“And we had to get Texas Parks and Wildlife and the Texas Department of Transportation,” Klaeger added. “There were a lot of people we had to get to say ‘yes’ to it.”

On top of all that, the committee had to wrangle up sponsors and volunteers. Not necessarily an easy task considering it also included selling the idea of drag-boat races and the LakeFest concept to businesses and organizations that might have never heard of such a sport. But the committee quickly found the community liked the idea.

“I think one of the things I found out about our community was how much spirit our community had,” Morris said. “Everybody really helped out and wanted to be a part of it.”

But when the first races hit the water, it wasn’t without some problems. Being the first year, organizers didn’t know what to expect, especially with the turnout.

“The first year, we ran out of ice,” Morris said. “The whole city ran out of ice. It never occurred to us we would need that much ice.”

On Saturday, the volunteers running the cash boxes for admission and beer ran out of dollar bills. Not being able to make change for customers, organizers faced a real dilemma.

“But we had bank presidents go in and open their banks for us and help us out,” Klaeger said.

In fact, several local bank employees and officials were volunteering at the event.

The first year of LakeFest showed the committee it could be done, and they quickly learned from those initial lessons and began building what would become one of the most successful events for the chamber. The initial committee core of Dollar, Klaeger, Burton, Morris, Ott and Kemper headed up the event for 15 years. The first two years of the event included monthly meetings, often in Klaeger’s garage.

Klaeger, who still has the documents from those years, pointed out that from 1992 to 2001, LakeFest grossed approximately $2.2 million with a net income for the chamber of about $600,000. The event was able to turn around and give approximately $75,000 to local nonprofits — many of which provided volunteers for LakeFest — during that 10-year span.

“LakeFest really allowed the chamber to do a tremendous number of things,” Klaeger said. 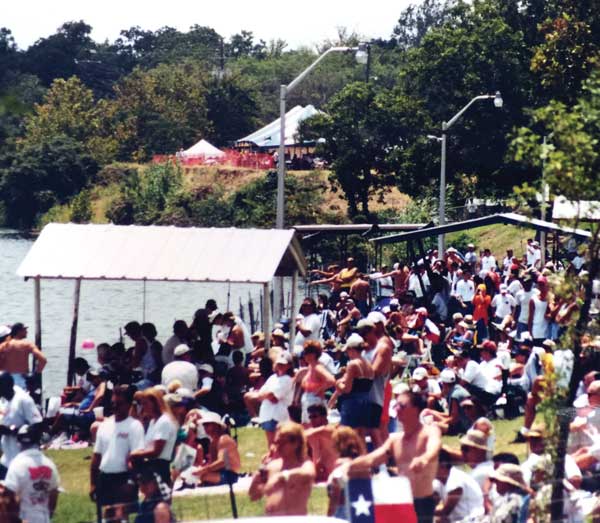 The crowds at an early Marble Falls LakeFest.

And the founding committee understood the value of the event and how to make sure it made money. Klaeger said from the start the goal was to always line up enough sponsorships so the event was paid for before the first boat even hit the water. And sometimes, when things were a little close to covering costs, organizers weren’t afraid to keep folks on the banks a little bit longer.

“We probably knew how much beer we had to sell down to the can,” Morris said. “So if it looked like the races were going to be over before we hit that number, we’d have Ken or one of the other guys see if they could keep the boats on the water.”

The committee also found ways to get creative with its marketing budget, which was paltry. And this was before the internet and social media such as Facebook and Twitter exploded. But businesses and corporations, including Coca-Cola and Sonic, jumped on board when they saw the number of people LakeFest drew.

During some years, just about every Sonic in Austin put LakeFest on its order displays and tray papers. Then during the 10th anniversary, Dr Pepper slapped a LakeFest coupon on every can it sold in Texas.

“I don’t know how you can put a value on that,” Klaeger said.

Even Lamar Outdoor Advertising offered billboards in several places across the state if LakeFest organizers simply provided T-shirts for the company’s staff.

As wonderful as the idea of drag-boat racing was, and is, Klaeger and Morris said the success hung on a couple of things. First, the committee members enjoyed working together, and no matter what problem or issue came about, they found a way to deal with it.

“Sometimes, it was somebody saying, ‘Hey, let’s try this,” Klaeger said. “And if it worked, great, we kept doing it.”

“And if it didn’t,” Morris added, “we didn’t do it again. And that was the great thing about this group. We had a lot of fun planning and working at the races. And during the races, we were at it all day. And they were long days.”

The other major component was the volunteers.

“Our volunteers were amazing,” Morris said. “We had volunteers who came back year after year. They’d usually volunteer for the same thing. So if they were at the ticket booth, that’s where they usually stayed. Same with the beer booth or at the take-out ramp.”

Klaeger and Morris estimate that, during those first 15 years, they maintained a 80-90 percent volunteer retention rate.

“We’d get phone calls from volunteers saying, ‘Don’t you need me this year, because I haven’t heard from you yet?’” Morris recalled. “They loved volunteering for it.”

After 15 years as the core of the committee, it was time to step aside, Klaeger and Morris said. Some of those original committee members continued to help. Dollar even carved out a career in the drag-boat racing industry and currently works as the director for the Lucas Oil Drag Boat Racing series.

Looking back, Klaeger and Morris enjoyed working on LakeFest. There were rough times such as the day Morris, who happened to be the committee chair at the time, had to announce to the crowd of thousands that the races were cancelled because of high winds. But overall, they loved working on the committee and LakeFest.

“The thing was, everyone was learning together,” Klaeger said. “And we learned a lot those first couple of years. So by the third year, it was really running itself. But it was a lot of fun.”

“It was a great time. And we enjoyed working together,” Morris said. “And even now, everyone on that committee, we still get along and love each other.”