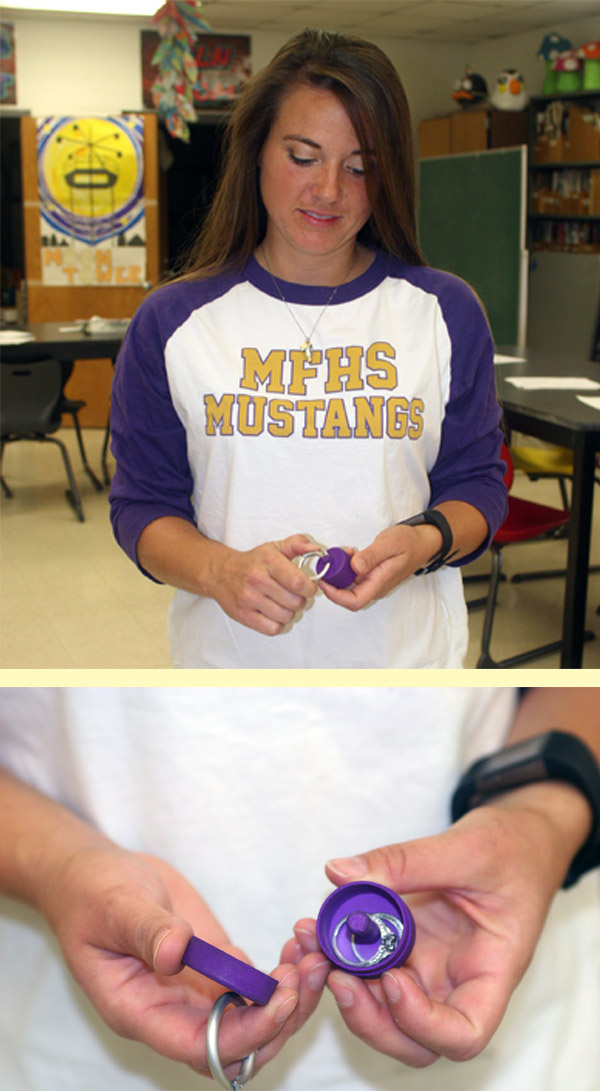 MARBLE FALLS — An usual incident got Lerin Lockwood thinking about how to turn a negative into a positive, resulting in her creating the Lion Latch.

The Lion Latch is a small plastic cylinder that clicks onto key rings. It’s designed to keep rings, earrings and necklaces safely hidden in plain sight, while a person works or plays.

Lockwood, who is the Marble Falls High School assistant tennis coach, was an assistant softball coach at the school in 2013 when she was taking the place of a defender during practice. As she caught a ball thrown by former player Katie Whitecotton, Lockwood immediately felt pain and pulled the glove off her left hand.

She had recently gotten engaged to her husband, Trent, who surprised her with an engagement ring with a large diamond and smaller stones.

“I didn’t know I wasn’t supposed to be wearing a ring while I was playing sports,” she said. “The engagement ring flattened into my finger and knocked out one of my stones.”

Trent had picked that style of ring because it reminded him of one of his wife’s traits: toughness.

“I struggled to get the ring off,” Lerin said with a laugh. “But once I did, I couldn’t believe how much it flattened.”

The couple had gotten the ring insured; however, Lerin learned her lesson and began to take off her jewelry before playing sports.

But that led to another problem.

She didn’t feel comfortable putting her ring in a pocket, in her vehicle or anywhere she couldn’t see it or feel it. And coaches usually have all kinds of things in their pockets such as meal money, lineups or blank paper on which to take notes during games.

“I kept trying to find a place to keep my ring, but nothing felt secure,” she said. “I had to find a safe spot for my engagement ring. It symbolizes my relationship with Trent. I wanted to do something that would protect it.”

So she came up with the Lion Latch.

“I made it (small) because it fits in my pocket,” Lerin said.

She chose “lion” for the name because it’s her favorite animal and “latch” because, as an English teacher, she loves alliteration. Available in eight different colors, even men can keep their masculinity while keeping their rings safe. Trent uses a Lion Latch to protect his rings as he works and plays, his wife said.

Lerin said people in various professions with different hobbies will find the Lion Latch useful. And since she still coaches, her players are constantly asking her to hold their jewelry before they take the court.

And the ones who don’t ask their coaches to hold their jewelry?

“We find their jewelry (at our facilities), and it never gets claimed,” Lerin said.

Lerin was inspired to start producing her invention after listening to a speaker during Trent’s graduation from Texas Tech University.

“She gave a speech about how most good ideas never leave the drawing board,” she said.

Lion Latch began on KickStarter, a website that helps creative projects find financial support through “crowdfunding,” which allows people to pool their money from a large group. Lion Latch needs to reach 100 percent funding by Nov. 2 to begin mass production. Kickstarter is an “all-or-nothing” campaign, so Lion Latch needs help to reach its 100 percent goal.

Purchase Lion Latch on its Facebook page by clicking the “shop now” button in the banner and selecting the “Back this Project” on the kickstarter.com page.

great idea. I was a coach and Drill Team Director and can think of many uses for it. Also, when I get my nails done, i don't know where to put my rings. They get lost in your purse. Lion Latch would be perfect, for that. I would purchase a few and give them to my daughters; in their Christmas Stockins!

How much is the Lion Latch?