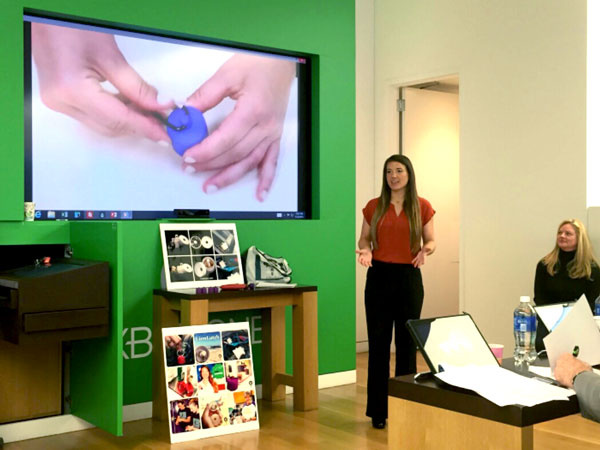 Lion Latch inventor and Marble Falls High School coach Lerin Lockwood talks about her product during a presentation Nov. 6 to innovateHER!, a company that helps female inventors get their product to the masses. Courtesy photo

MARBLE FALLS — Lion Latch has gone from a dream to reality.

Her Kickstarter.com campaign raised enough money for her to produce 1,100 Lion Latches. The small plastic container locks away jewelry and can fit inside a pocket or attach to a keyring.

Lockwood will receive a sample of the product for approval before mass production begins.

“Any changes, I can make them,” she said. “They’ll be ready to ship out by December.”

Lion Latch has captured the attention of more than Highland Lakes residents. The coach said she has orders in Great Britain and Australia.

Lockwood was one of 15 women in Austin on Nov. 6 to talk about her invention at the innovateHER! competition, at which she finished third. The company helps female inventors bring their products to the masses.

She told them about Lion Latch.

“There’s a need in the market and how it’s helpful for women, how it empowers and benefits women and families and how I’m going to commercialize it,” she said. “It’s a learning experience. You mingle and meet the other inventors.”

Lockwood invented Lion Latch because she wanted to keep her wedding ring safe while at work or play. As a coach, she has seen many pieces of jewelry left behind at gyms and on tennis courts as athletes took them off during games.

And as an art teacher, she has witnessed her students take off their jewelry to work on projects and leave them behind when it’s time to clean up and go to the next class.

Lockwood thanks the community its support, for seeing the benefit of Lion Latch and helping to fund it through Kickstarter.

“I’m really appreciative of all the help I received from Marble Falls,” she said. “People let me talk to clients, and coaches let me talk to their athletes.”