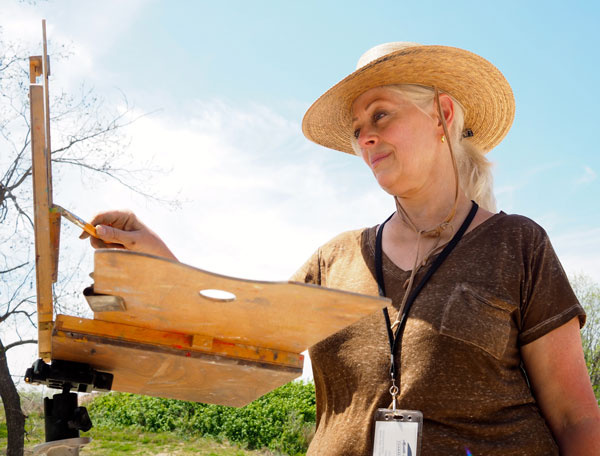 Paint the Town plein air competition returns to Marble Falls on March 31-April 2. Artists will set up on Main Street and beyond, and this year’s event includes a Paint Off from 7-9 p.m. April 1 at Lakeside Pavilion, 307 Buena Vista Drive in Marble Falls. File photo

MARBLE FALLS — When the 10th annual Paint the Town plein air competition rolls into town March 31-April 2, people can expect to see some major differences than in years past — all for the better.

“For one thing, we have 50 artists coming,” said Janey Rives of Highland Lakes Creative Arts. “We actually had to cut off entries. I’m so excited because after 10 years, it’s really blossoming out.”

Paint the Town is a plein air competition during which artists set up their easels outside and around the area and paint. It’s open-air painting as opposed to painting in a studio. Rives explained that artists really love getting outside and opening their creativity up to what they see in front of them.

But this year’s event also includes a student program.

“We’ll have about 30 (middle school and high school) students who will come out and be paired with a painter,” Rives said. “It’s a great way to continue to expand the arts and Paint the Town around the community.”

Both middle school and high school students can also compete for awards.

Paint the Town has expanded in other ways as well. In previous years, painters pretty much stayed around downtown Marble Falls, but Highland Lakes Creative Arts (which has taken over organizing the event) has found several private property owners who were willing to allow the painters to come out to their ranches and properties to paint.

“For the artists, they get to see a different part of the Highland Lakes, so it’s something new for them,” Rives said. “But you’ll still see quite a few artists around town.”

Paint the Town will be headquartered at Lakeside Pavilion, 307 Buena Vista Drive, this year. By moving it here, the artists have a weather-safe location to display their works. The location also allows for demonstrations, food and music as well.

While artists will spread out across town and the Highland Lakes, they’ll also get a chance for a Paint Off at the pavilion from 7-9 p.m. April 1. During the Paint Off, Rives explained, they’ll have live models — including ballerinas from Harmony School of Creative Arts — from which to draw inspiration.

This is the first year Highland Lakes Creative Arts has headed up the event. The group was founded last year by local art enthusiasts as a way to further the arts in the Highland Lakes.

Paint the Town has been under several umbrellas over the past 10 years after Russell Buster proposed the idea to Rives as part of a former music festival. Then, the Marble Falls/Lake LBJ Chamber of Commerce took it under its wing before letting it spread its wings with Highland Lakes Creative Arts.

With the added programs, activities and events, it seems to have found its feet.

Other activities include live music, food, art auctions and more. As a juried art show, the artists’ works will be judged and awarded.

The event wraps up April 2 from 5-9 p.m. when Bob Spalding (guitarist for The Ventures) and his band The Lobby Boys take the stage at the pavilion. And there are some surprise performers coming as well.

Go to hlcarts.com for a complete schedule and more information.

I am very impressed and can't wait to go to this event. I just started an artists group on Facebook and will post this event on it! Great job Marble Falls and Highland Lakes Creative Arts!