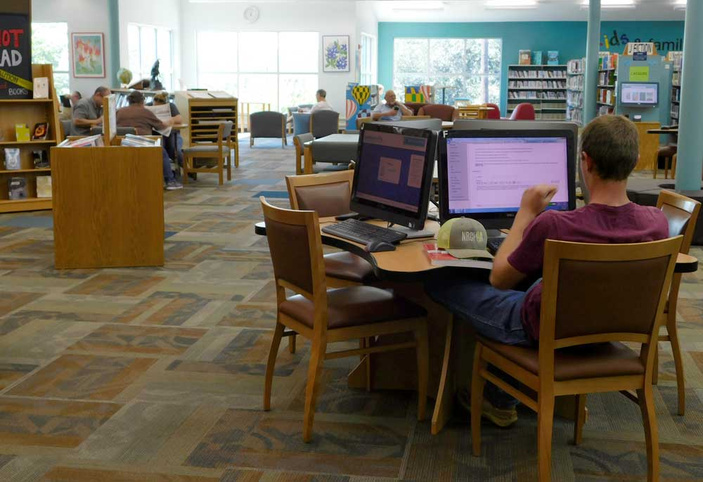 The Marble Falls Public Library is holding a week of events Oct. 2-6 in celebration of its 20th anniversary at 101 Main St., the facility's fourth location. Staff photo by Jennifer Greenwell

MARBLE FALLS — Diane Collins has been asked to get a new Marble Falls Public Library card, but she refuses.

The reason is because it’s the very first card the library issued in the mid-1990s, and it doesn’t have a photo, unlike today’s cards.

“I’ll hold onto it for years unless someone wants to put it in the (Falls on the Colorado) museum,” she said with a laugh.

The card also represents the impact of the library and how it remains a constant fixture in the city, even as the staff has adapted to new technology. 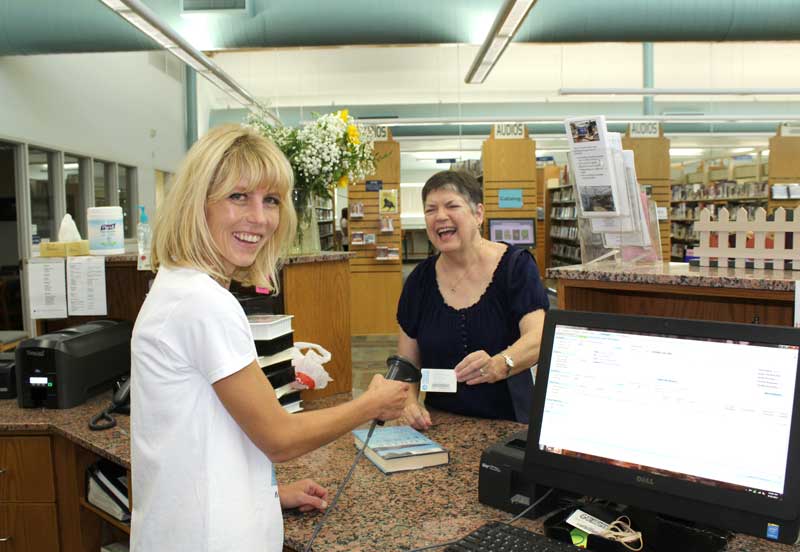 “The library is a community treasure,” Collins said. “I always wanted that written above the door. It’s a place where children can go and be in awe. I might (have turned) in my master key to the library, but I still have my library card, which is still the key to the treasure house.”

Collins served as the director of the Marble Falls Public Library from May 1979 to 2001. When she took the reins, the library was located on Fourth Street on the site now home to the Marble Falls Economic Development Corp.

She helped spearhead efforts to build the current facility, which is celebrating its 20th year at 101 Main St. It took a great deal of effort by her and others.

“I used to joke this was my third baby,” said the mother of two with a grin. “The first two took nine months; this one took nine years.”

The library will host daily activities to celebrate the anniversary:

The current spot is actually the fourth library site. The city’s first library was in the back of the Boxell and Hartzell Department store, which is now Old Oaks Square, on Main Street in the 1940s.

Established by Lois Anderson, that library had several books passed among the Burnet County Library System, which included Burnet, Bertram, and Briggs. It had one bookcase, and residents were donating more books than there was room to shelve them.

The second library was on the corner of Third and U.S. 281 across from City Hall.

But as the community grew, so did the need for a bigger library. People “scrounged and raised money for the third building,” Collins said.

The Fourth Street incarnation was 4,500 square feet and was adequate — for the moment. By the late 1980s, Collins saw that more space was needed.

People read books, newspapers from across the state, and national magazines. They could check out VHS movies, audio tapes, and CDs. Whole book collections, encyclopedias, and other research-based volumes were available. Staff members expanded the children’s department into a former meeting room as more and more children’s books were published. People wanting to get their GEDs or learn English would attend classes in the library. And technology forced staff to add computers and a microfilm reader.

When the decision was made to build a new library on Main Street, the talk was that the only real space that was needed was for computers, but Collins knew the library’s role was so much more than that. Her vision included computers for both adults and children, which meant creating a space for a children’s section that included books, a spot for storytime, and appropriate-sized furniture.

Collins and other members of the Friends of the Marble Falls Public Library applied for every grant they could and received many small ones, she said. They also held rummage and garage sales as well as other fundraisers.

“We raised it with volunteers,” she said. “That is, to me, part of the gold. This community is about volunteers. If you need it done, it’s done. The volunteers step up and do it. We had a very active board and volunteers, who had to raise $1.7 million.”

The current building is 15,200 feet, and the mortgage was paid off long ago.

When it was time to move, a professional moving company relocated more than 30,000 print volumes and a special reference department.

One of Collins’s fondest memories, however, was how the children’s books were relocated from the old building to the new one. Catherine Hicks and Donna Klaeger organized what is called the Library Book Brigade and invited members of the Marble Falls High School football team, cheerleaders, Rotarians, Kiwanis, and other organizations and residents to participate.

“We passed them hand to hand,” Collins said. “It was anybody you can think of. You think of every group in the community, you will have it. I remember it didn’t take nearly as long as I thought it would. We had a huge cake in the meeting room.”

Recently, Collins walked through the library, noting where the current staff has made changes such as in the children’s area.

There’s furniture there and a display for children’s books.

“They’ve remodeled this,” she said. “It used to be a reference section.”

Current Marble Falls Public Library Director Amanda Rose grinned as Collins explained how the library has changed, even in the 20 years it’s been on Main Street.

“That’s the job of any librarian,” Rose said. “They need to know the community; otherwise, they become irrelevant. That takes working with the patrons and observing and listening and responding. You look at all of our services. It should be community-oriented. It’s a gathering place as important to our patrons as shopping at H-E-B.”

Parents and grandparents still bring their little ones to the library for storytime or to check out a book.

There’s an area for teens complete with power strips to allow them to plug in their laptops, tablets, cellphones, and other devices as they enjoy books and media created just for them.

Adults can be found using computers for job searches, work, and other things. And they’re still checking out books, reading magazines and newspapers, and doing research. But instead of checking out CDs or VHS tapes, they’re borrowing DVDs or asking to read book series such as “Outlander” or “Game of Thrones,” which have been turned into popular TV series. Rose noted the library has some television series on DVD. Organizations use the community meeting room to provide free legal help, learn how to take better photos, be better writers, and more.

“I think the library is an environment, not just a place to check in and check out,” Rose said. “We have programs geared toward all ages, all interests and community organizations. Yes, there are advancements in technology, but you’re getting it through the library.”

“It’s to provide services to the people of the Highland Lakes,” Collins said.

Rose refers to it as lifelong learning, something she witnessed as a library volunteer way before she was the director.

“That’s when I learned it’s about the people and working with the people,” she said. “I wanted to help people. I loved it, I was hooked.”

As part of the 20th anniversary, the restrooms, lobby, community meeting room, and staff bathroom are being renovated.

“The Friends wanted to spiff them up,” Rose said. “It’s going to be more environmentally friendly; it’s going to have a striking design.”

Collins knows she may one day have to replace her original card but can’t bear to think about it. She still uses that card to check out books, noting she goes to the library “more so now.”

“I think I was raised from childhood to read with my particular set of eyes,” Collins said. “I have my own transportation. I grew up in a little town, and the library was in a basement and only open on certain days. Now, I can go when I want to.”