As Walkway of Lights marks 25 years, look at the display in a new light 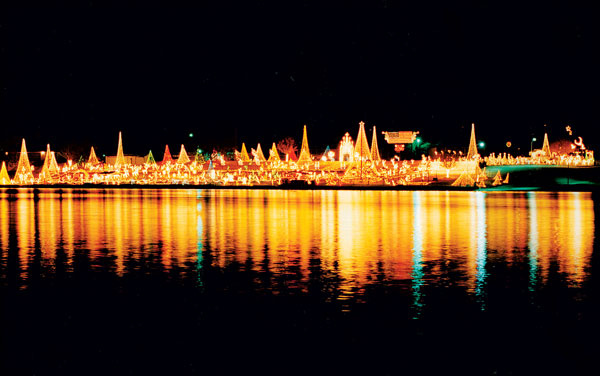 As Walkway of Lights marks 25 years, look at the display in a new light

MARBLE FALLS — How do you keep a 4-year-old boy from racing through throngs of people as he makes a dash for Santa Claus, who is somewhere “that way?”

Well, for my son Zach, who was very much on his way to the man in the red suit with his Christmas list clenched tightly in his hand, the first string of lights stopped him cold. He burst into the Walkway of Lights two years ago hoping to make it to Santa before the Jolly Ol’ Elf headed back home. But when the big light sculpture lit up the sky next to him, Zach forgot all about Santa (for a bit).

It was two years ago and the first Walkway trip for Zach and and his older brother, Luke.

I had made many a trip through the annual Christmas lights display on the shores of Lake Marble Falls since taking the job at The Picayune, and maybe I had become a bit “ho hum” about the entire affair. I’d slip in, try to get a few photos and then slip out.

This time, however, things had changed.

“Wow, look at those,” Zach said. “Look at those reindeer.” Then, before I could really figure out which display he was talking about, Zach bounced off to the next one, slipping in and out of the crowd.

Luke followed, but something quickly caught his attention.

At first, I spent more time trying to keep the boys close, worrying about them getting in someone’s and just hoping they didn’t knock anything over. (They didn’t.)

Then, both boys stopped not too far from the entrance by the big American flag.

“That’s pretty,” Zach said, but he didn’t bounce off.

I took a breath, hoping I could convince them to keep moving, but in that moment between breaths, I finally looked at the lights.

Really looked, not just a cursory glance followed by a nod and “Yup, now let’s go.”

It took a moment to understand what the boys were seeing. It wasn’t just the lights.

But each display, each twinkle or change of colors meant Christmas to the boys. No, it wasn’t the same thing as in church when they turn down the lights and we lift our candles to “Silent Night.” It was a little kid’s Christmas. For a second, I remembered traipsing through the snow on a Michigan Christmas tree farm as my dad, brother Jeff and I looked for the perfect tree for our house.

To many people, each tree might have looked exactly alike, and I’m sure that’s how it started for my dad. But Jeff and I would see the difference in every one. Dad would huff and “hrumph” as we went from one to the next — at first. But soon, he fell right in with us, appreciating each tree.

As Zach and Luke worked their way from one group of lights to the next, I fell in line with them. Instead of rushing them through, I let them take the lead, trailing behind and trying to see each light and each display as they did.

So it is after 25 years with the Walkway of Lights.

The display, which opens Nov. 20 after the parade, has been captivating people for a quarter of a century. But mostly, it’s been reminding us of the wonder and awe of the Christmas season from the eyes of a child.

If you haven’t been in a few years, or recently settled in the area and don’t know much about Walkway of Lights, come out and give it a walkthrough. Pause here and there to take it all in. Enjoy the Christmas music as it plays in the background along the shores of Lake Marble Falls.

If possible, take a couple of kids; they’ll show you how to enjoy it.

As for the trip two years ago, the boys became so enthralled with the lights, they didn’t even bother with Santa.

But don’t worry, we caught up to the Jolly Ol’ Elf on another day, and Zach gladly shared his Christmas list (which had grown quite a bit) with Santa Claus.

Admission is free, but donations are greatly appreciated.

Go to walkwayoflightstx.com for more information.

This is my Home Town Marble Falls Texas, thank you Mary Wimberly for posting this. It is Beautiful wish I was there to walk the walkway. Just Breath takeing