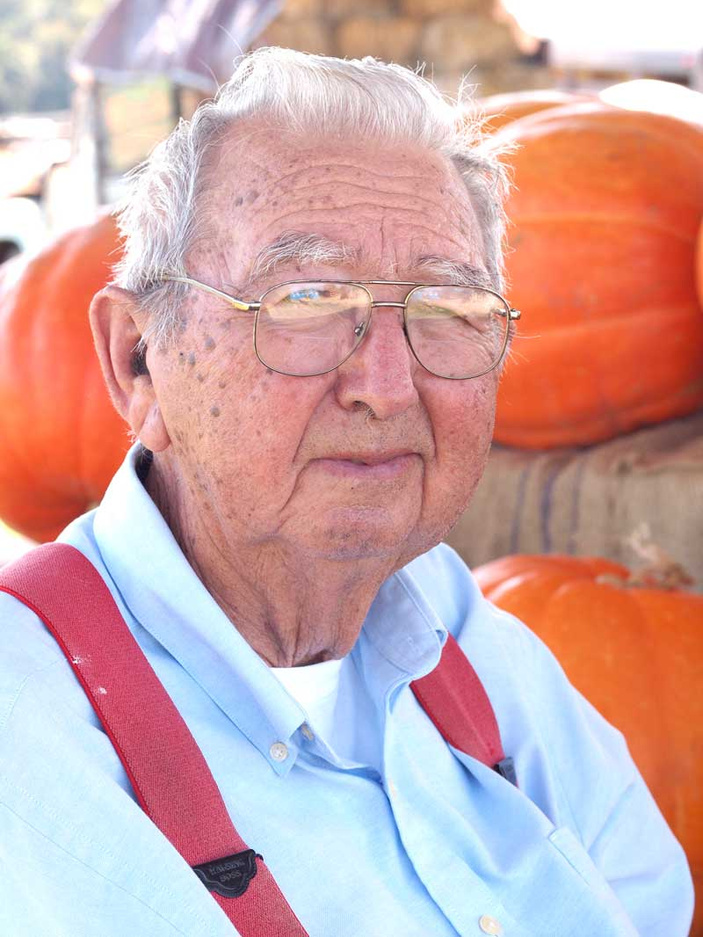 The Rev. Max Copeland, affectionately called ‘Brother Max,’ was well-known in the community for his support of the youth and their endeavors. Before he passed away in May 2015, Copeland attended countless youth, middle school, and high school athletic events. On Friday, Oct. 27, Marble Falls Independent School District officials and community members will commemorate Copeland during the Marble Falls High School football game and announce a scholarship in his honor. Staff photo by Daniel Clifton

MARBLE FALLS — He might have wished the varsity gymnasium at Marble Falls High School wasn’t named after him, but there’s little doubt Max Copeland, the former pastor of First Baptist Church of Marble Falls, would have been OK with a scholarship honoring him, according to those who knew him best.

“He would be more in favor of that than the gym because he supported young kids, and doing things for kids in Marble Falls was something he was interested in,” said Larry Berkman, a Marble Falls school board member and longtime friend. “That was really doing something for what he really wanted to do. That would be giving a kid a chance to go on.”

"Brother Max," as he was affectionately called, died May 25, 2015. His legacy as the Mustang minister can still be seen at Max Copeland Gymnasium along with the red chairs installed for him in the gym and at Mustang Stadium.

That legacy along with Copeland's wife, Glenna and their children, Dathan, Dan, and Maxine, will be celebrated during the Marble Falls High School football game against Seguin, which kicks off at 7:30 p.m. Friday, Oct. 27. The stadium is on the high school campus, 2101 Mustang Drive.

A tribute to Copeland will be read, and the game will start the Brother Max Scholarship drive. Those who wish can donate to the scholarship when red buckets are passed through the stands during the first and second quarters.

The football team will wear red socks and play with red-laced footballs.

That color is a tribute to Copeland, who could almost always be seen wearing his signature red suspenders and red socks.

“I know this will bring back a lot of memories to the people in the stands,” Berkman said. “The list is endless.”

It’s fitting the scholarship drive starts at a ballgame, organizers say, because Copeland loved sports and loved cheering on the Mustangs. It’s estimated he watched so many Marble Falls contests it would equal one game a night for 22 years.

Chris Allen, superintendent of Marble Falls Independent School District, said he was told Copeland would say that, while he wore red suspenders and socks, he bled purple and gold.

The scholarship for a Marble Falls High School student will go to someone who shows the traits Brother Max displayed, Allen said. The amount of the scholarship will depend on how much money is raised, he added.

Amber Weems, publisher of The Picayune and general manager of KBEY 103.9 FM Radio Picayune, said Brother Max’s importance in the community comes down to what he displayed to those who met him.

“In my opinion, his 'Community Heart' was defined through commitment to the people of the Marble Falls area as the pastor of First Baptist Church of Marble Falls, unselfish love through countless weddings and funerals, and, of course, encouragement of the youth by attending years of sporting events,” she said.

When people began to realize Brother Max wouldn’t be around forever, they started thinking of ways to keep him part of the community. An advisory board formed a list of his characteristics to choose someone who emulated those traits. That individual would receive a framed pair of red socks and would be honored in the newspaper for their community heart.

They also realized they needed help, so Weems and others approached Allen. Once the Marble Falls Education Foundation formed and its board hired Pam Parkman as the executive director, the time came to launch the student scholarship and Community Heart award, Weems said.

Parkman said individuals can apply for the Community Heart Award and the student scholarship starting in December.

“That person represents Brother Max and the heart,” she said about the Community Heart Award winner. “That person will announce and present the scholarship to the students at our academic banquet.”

Mustangs interim head football coach Mike Birdwell said he had the idea to honor Brother Max this summer after he was walking up the home stands, saw the red chair, and realized he didn’t know why it was there in a sea of purple and yellow chairs.

That’s when he found out about Brother Max, his red suspenders and socks, and his passion for the Mustangs.

“It would be a reminder for those who remembered but also a history lesson for those who don’t know him,” the coach said. “Unless you ask, you have no clue what that red chair means. It’s a way for us to honor his life.”

“It’s a shame people didn’t know him,” Berkman said. “He remembered something about you that made it special. He had such a gift.”