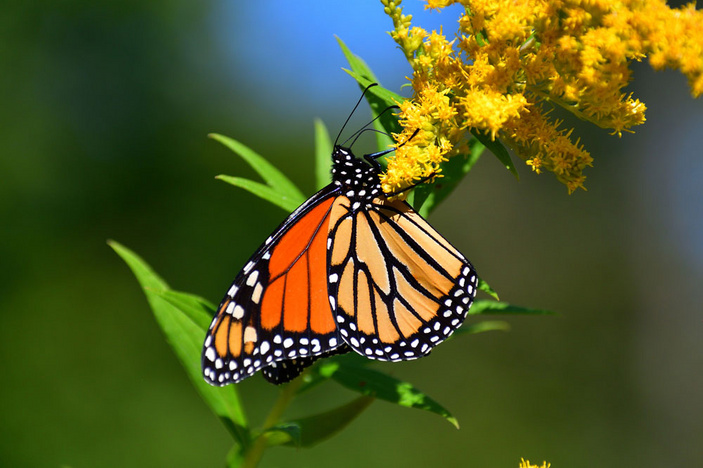 An adult monarch weighs about half a gram. Sensory organs on their feet and head help them identify plants, such as this goldenrod. iStock photo

Search the Highland Lakes landscape in October and you’ll see VIPs flitting through the air on their way to Mexico. These Very Important Pollinators, or monarch butterflies, trek through town twice a year, once on a northern migration in the spring and again heading south in the fall.

Triggered by seasonal changes in daylight and temperature, the cycle stretches across the length of North America, basically traveling a wide swath along the Monarch Highway, otherwise known as Interstate 35. It takes four to five generations of butterflies to complete the roundtrip journey. Each migration runs 3,000 miles through at least six states.

The colorful insects only fly during the day, traveling with the wind. Should the wind blow in the wrong direction, monarchs await a change of course before heading out again. When the sun dips below the horizon, they gather in clusters, or roosts, in trees. Roosts can range in size from just a few butterflies to hundreds or thousands of them, pulsing like a single organism.

Roost locations change each year but are always near a nectar source. The purpose of a roost is a bit of a mystery, although it is believed that roosting provides protection from predators, cool temperatures, and wind.

The spring migration begins in central Mexico in late March. Monarchs begin to head north as they become ready to reproduce. Texas plays an important role in monarch conservation as migrating monarchs breed and lay eggs on their journey north. The abundance of milkweed in the area attracts monarchs as it is the only type of plant on which the insects will lay their eggs. Larva require milkweed plants as a food source, while adult monarchs nectar (feed) on any flowering plant. Once the butterflies reach northern destinations, they continue breeding, nectaring, and pollinating plants.

The journey south is the longest of the two migrations, with some butterflies traveling as far as 3,000 miles. They pass through the “Texas Funnel” on their way to central Mexico to overwinter. Access to food during this trip is essential. The monarchs need to build up a fat surplus to get them through the winter. They do not breed, reproduce, or eat during the winter in Mexico, but they do need water.

A monarch's lifespan ranges from 2-6 weeks, except for the last generation each year. The generation that overwinters in Mexico lives 8-9 months. Those heading north from Mexico in March might only get as far as Texas before their journey ends. The offspring they produce, known as the first generation, continue the trek north.

Second and third generations are born in the north and do not migrate. The fourth generation starts the trek south through Texas to Mexico. Sometimes, fall breeding occurs in the south during migration, producing a fifth generation, which joins the journey to warmer weather in Mexico.

The number of monarchs making the trip either way has been declining each year for the past several years. The overwinter count in Mexico for 2019-20 saw a 53 percent decrease from the year before. The drop in numbers is attributed to weather and loss of milkweed and nectar flowers along their routes. The use of glyphosate as a herbicide has also hurt monarchs as it kills their life source: milkweed.

The Center for Biological Diversity, a nonprofit founded in 1989 to fight the growing number of threats to biodiversity, is collecting signatures on a petition urging the U.S. Fish and Wildlife Service to place monarchs under protection of the Endangered Species Act. Visit biologicaldiversity.org for more information.

Life cycle of a monarch butterfly

Monarchs live for about a month and go through four stages of life: egg, caterpillar, chrysalis, and adult.

Monarchs lay about 400-500 eggs individually on the underside of milkweed leaves, the first of four stages of butterfly life.

Monarchs are known to be an indicator species: A healthy monarch population indicates a healthy earth. These delicate creatures play a vital role in the earth’s ecosystem as they, and other pollinators, are responsible for the reproduction of fruits, vegetables, grains, and everything else that grows.

IN THE GARDEN: Is it partial or full sun?