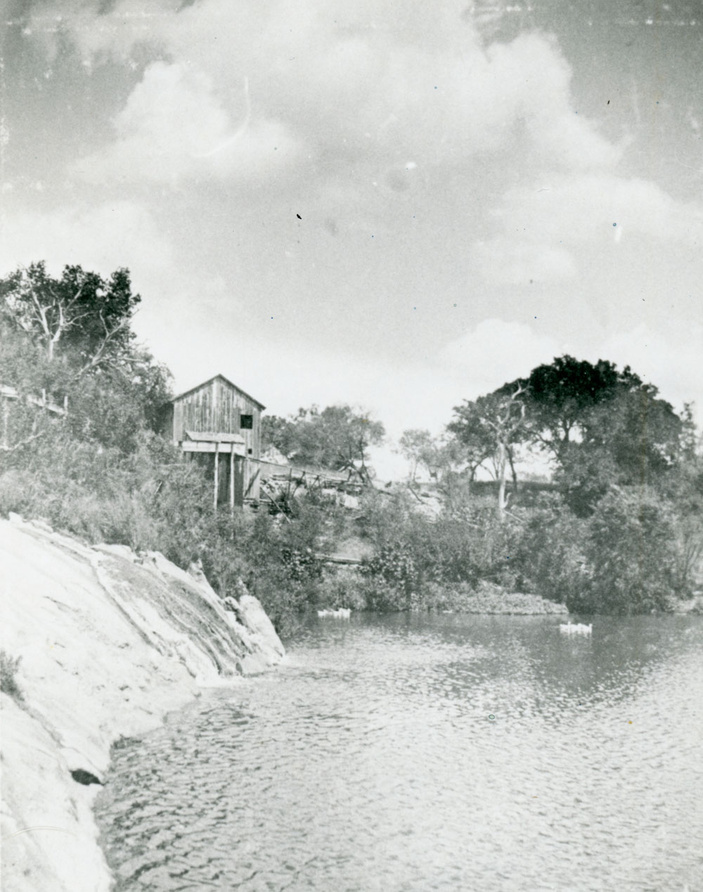 At its founding, Mormon Mill hosted a population of about 250, supported a sawmill and gristmill, skilled furniture craftsmen, and blacksmiths. Locals farmed, hunted, and made simple crafts. Photo courtesy of The Falls on the Colorado Museum

Where Mormon Mill Road gets its name is no mystery. The byway’s moniker says it all: This is where a group of Mormon settlers built a mill. What it does not reveal is the rich vein of history that runs through the very heart of the Marble Falls community, involving historical icons such as Lyman Wight, Noah Smithwick, and Ida Babcock-Hall and even featuring a vision and a miracle.

Not much remains of the mill community, which now resides on private property inaccessible to the public. Descendants have reportedly asked for access rights to their ancestors’ cemetery, which is overgrown and far away from prying eyes. A partial replica of the mill and a display of artifacts from the site can be seen at The Falls on the Colorado Museum in Marble Falls. The original millstone, part of the legend of the location, is on display at Fort Croghan Museum and Grounds in Burnet.

Here’s the story that research unveiled.

A few years after the establishment of Fort Croghan in Burnet in 1851, a group of 20 Mormon families — roughly 250 people — under the leadership of Lyman Wight settled on Hamilton Creek in southern Burnet County. The group had been flooded out of previous settlements in Travis and Gillespie counties. After losing their millstone in Gillespie County, Wight moved them to the Marble Falls area.

Newly quarried blocks of marble used to replace the more productive millstone needed frequent sharpening, so Wight set out to find their lost original stone. Noah Smithwick, a local blacksmith who eventually bought the land from the Mormons, wrote in his memoir, “The Evolution of a State or Recollections of Old Texas Days,” of how a frontier miracle located the stone. Wight, he said, had a vision.

“After wrestling alone with the spirits for some little time, he arose one morning with joy in his heart, and summoning his people, announced to them that he had had a revelation, and bidding them take spades and crowbars and follow him, set out to locate the millstones,” Smithwick wrote.

With divining rod in hand, Wight led his disciples to a sandbar deposited by the flood. He then struck his rod into the sand, commanding them to dig right there. A buried millstone was uncovered in that same spot.

The Mormons returned to Marble Falls with their treasure to establish homes and businesses in a place Smithwick describes as "one of the most picturesque spots to be found.” The mill was three stories tall and featured a huge overshot wheel 26 feet in diameter.

While some of the male settlers operated the mill, others worked the land. They provided blacksmithing and repair work and built furniture. The women made and sold willow baskets, spun and wove cloth, and grew gourds for storing dried fruit and lard.

According to an account by Ida Babcock-Hall titled “Memories of Mormon Mill” published in the Frontier Times in 1941, the Mormons faced discrimination by other settlers and threats from Native Americans. Wight sold the mill to Smithwick and moved on. Smithwick discarded the mill saw and refitted the mill to focus on foodstuffs.

“People came from all points to have their grains ground, and the capacity of the mill being very limited, sometimes when the mill was crowded they had to wait several days for their turn,” Smithwick wrote. “Those who lived at a distance, many of them 30 or 40 miles, struck camp and stayed it out.”

Many of the Mormons left after selling the mill, but some families remained. For them, Smithwick built a store and a school. After a few years, Smithwick sold his share of the mill to a nephew named Hubbard and relocated 8 miles south of Marble Falls to build a more substantial mill.

Business continued to be lively, at least for awhile. In her Frontier Times story, Babcock-Hall recounted her earliest childhood recollection of visiting the mill.

“I’ll not forget the anxious look on Mother’s face when the miller informed us we would have to spend another night at the mill,” she wrote. “The water was low, and the miller had not been able to accommodate all his customers that day.

“All such fears meant nothing to me. Gleefully I hopped along in my bare feet, kicking sticks and pebbles into the water and watching them disappear from sight. Why would anyone wish to hurry back home? Wasn’t going to mill the grandest thing on earth?”

Business slowed as the country’s population grew. Other mills were built along the Colorado and elsewhere, and people didn’t have to travel as far to mill their flour and corn. In 1902, Mormon Mill ceased its activity. The original mill dam and several surrounding buildings were burned. In time, the burned mill was torn down and the machinery sold, but the name and the history of Mormon Mill remains.

To see a replica of the mill, artifacts and photos from the site and to learn more about the history of Mormon Mill, visit The Falls on the Colorado Museum, 2001 Broadway in Marble Falls, or fallsmuseum.org, or call 830-798-2157. The museum is open 10 a.m.-4 p.m. Thursday-Saturday.

The miracle millstone can be seen at Fort Croghan Museum and Grounds, 703 Buchanan Drive in Burnet. The museum is open April through October from 10 a.m.-5 p.m. Thursdays, Fridays, and Saturdays. Visit the museum’s Facebook page @fortcroghan or call 512-756-8281 for more information.

The Texas History Museum also claims to have the original millstone. It sits in their garden area. 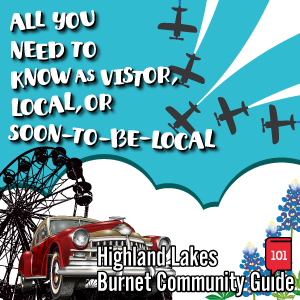