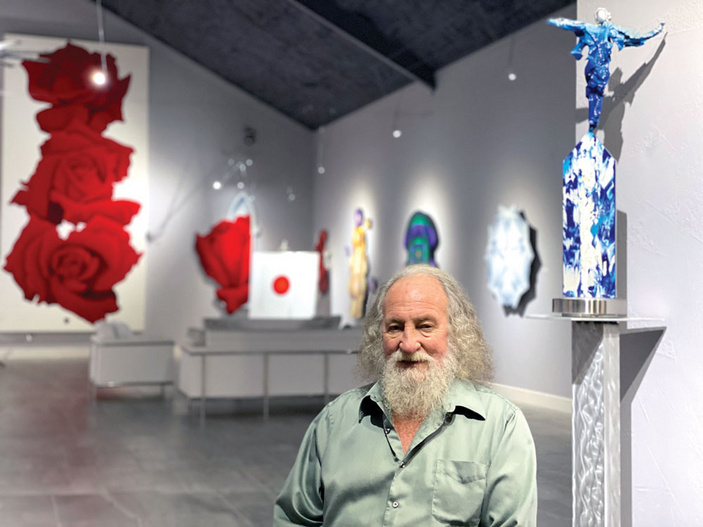 Visitors can follow the evolution of Benini’s artistic journey at MUSEOBENINI in Marble Falls. Courtesy photo

An internationally renowned artist who lives in the Highland Lakes, Benini (that’s his whole name) has made it a point over his more than 60-year career to travel paths not taken by other artists.

“All these years, we’ve done the opposite of what other artists do,” Benini said in his 6,500-square-foot gallery, MUSEOBENINI, in Marble Falls.

The gallery, which is open to visitors from 10 a.m.-6 p.m. on Saturdays and other days by appointment, displays Benini’s work from one end to the next as a record of his artistic evolution. It begins with the roses that earned him worldwide recognition and then moves through the years as his interest in other subjects and his reputation grew. Some of the earlier works, from his teens and early 20s, are not on display, but, eventually, the couple hopes to expand the space to make room for that, too. Outside, a sculpture trail features works from a number of artists.

Benini started his journey to the Texas Hill Country from Imola, Italy, where he was born in 1941. He began his art studies early, first learning landscapes and still life. As a teen, he struck out on his own, earning what money he could as a painter.

At 16, he went to work on a cruise ship, quit to travel across Europe, spent time in the military, and then returned to the cruise industry. After about a year, he jumped ship in the Bahamas to concentrate on his art and tackle acrylics, a difficult medium to conquer.

“It took me about 10 years to break the code of acrylics,” he said.

During the late 1960s through the '70s, Benini became known for his roses, some on canvases as large as 30 feet tall. It wasn’t just the beauty of the bloom that captivated but Benini’s artistry and technique. He brings a depth and dimension to the roses — and to his successive work — that continues to intrigue.

He covers most of the canvas so he can focus precisely on one small part of the picture. While he’s working on that detail, he still must keep the overall painting in mind, a laborious and time-consuming process. 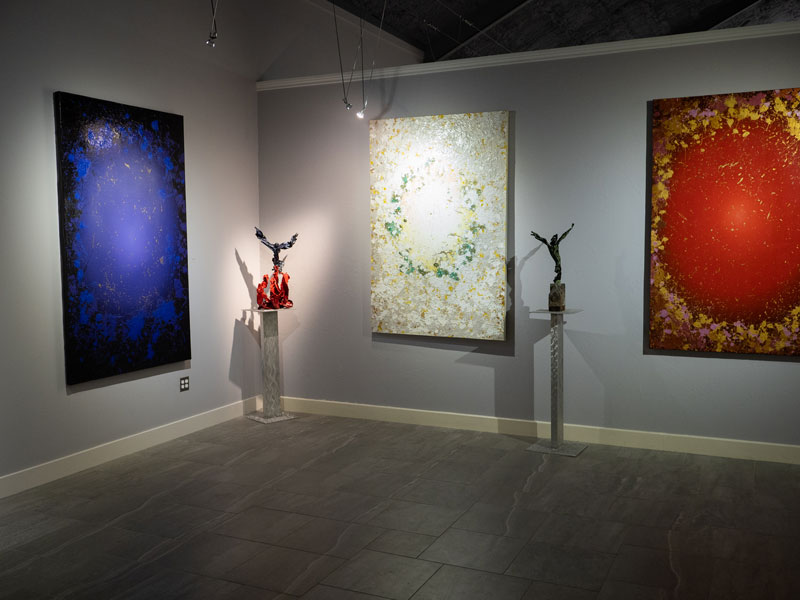 MUSEOBENINI, located southeast of Marble Falls, showcases the works of Benini, an Italian-born artist who follows his own artistic path. The gallery also features a sculpture trail on 35 acres with works from several artists. Staff photo by Daniel Clifton

After almost two decades in the Bahamas, Benini loaded everything he owned into a DC-9, and headed to Evington, Florida, near the University of Florida in the Panhandle. That’s where he met Lorraine.

After a few years, they moved to Lake Harney, part of the St. John River northeast of Orlando.

He continued to paint roses for a while — they sold before they were even finished — but also explored other styles. In 1986, he painted his last rose. A couple of years later, Benini and Lorraine headed out once again. This time to Bathhouse Row in Hot Springs National Park in Arkansas.

Benini started working with geometric shapes. He’d lay canvas across the shapes — often cut from metal — and use his rose-painting techniques to transform them from a flat, two-dimensional piece into something with depth and color.

In Hot Springs, Lorraine and Benini worked with a group of artists to start a documentary film festival, an art walk, poetry readings, and the Celebration of the Arts event. Artists from across the country and around the world came to take part.

“It got very busy,” Lorraine said. “For all the joy it brought, it also brought a lot of work. But, there came a time we wanted to focus on our life again.”

In 1999, they moved to a 143-acre ranch in Johnson City once owned by President Lyndon B. Johnson. On the ranch, Benini shifted to abstracts, again using acrylics and the techniques honed on roses and geometric shapes. He splattered drops of acrylic paint on top of his detailed images.

“It’s being free to do what’s in my mind,” Benini explained. “I started throwing paint at the canvas, and it was fun. I did that for a year, but, after the end of the year, I was missing the discipline, the dimension. So, I went to a hybrid.”

Lorraine describes Benini as a pilgrim when it comes to his art.

“He’s a seeker,” she said. “He doesn’t follow the traditional art community path.”

In 2021, they hope to resurrect Art Encounters, an event they held in Johnson City with other artists coming to talk about their work.

For now, they share Benini’s work in the gallery and along the sculpture trail, where they hope viewers will encounter an understanding of the art.

“The work isn’t fully realized until someone comes along and has their own experience with it,” Lorraine said.

Thank you for the spotlight on our museum.We are now open every Saturday from 10 - 6 and other days by appointment. Thank you!