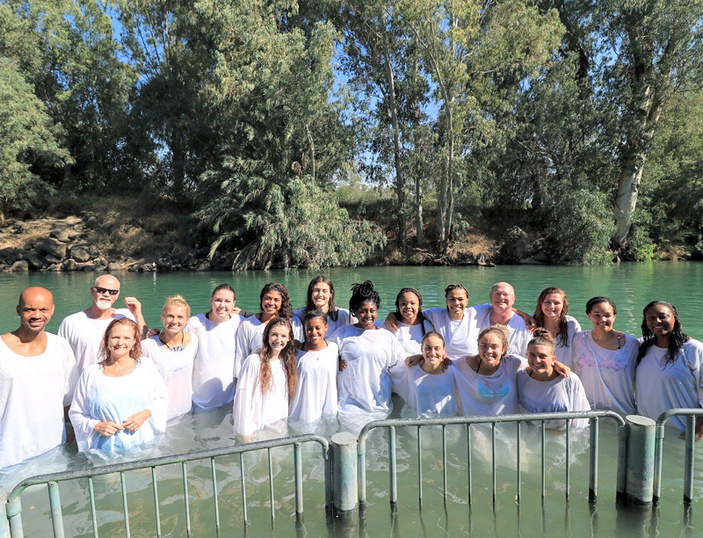 Marble Falls High School graduate Mya McMillian (back row, fifth from right) and her Liberty University teammates and coaches were baptized in the Jordan River during a recent trip to Israel. Courtesy photo

MARBLE FALLS — Before Mya McMillian boarded the plane for Israel on a two-week trip with her Liberty University Flames basketball team, the former Lady Mustang wasn’t sure she wanted to go.

However, it didn’t take long for her to be grateful for the experience, which happened July 30-Aug. 12.

“We got to go all over the place,” said McMillian, who graduated from Marble Falls High School in 2018. “We saw the Bible come to life. It was a great experience, especially when we went to certain churches.”

Among the highlights were getting baptized in the Jordan River, which played a pivotal role in the history of Jews and Christians, by her coach, Carey Green; visiting the Garden Tomb and another tomb believed to have stored Jesus’s body after his crucifixion; and seeing Catholic churches, the Mount of Olives, and the Dead Sea. The players also visited Tel Aviv and Jerusalem but not Bethlehem because it is in Palestinian control.

“There was sometimes a lot of walking,” McMillian said. “My feet were dead. We had to keep changing shoes.”

One such day was when the team hiked up a desert mountain with beautiful waterfalls. She and her teammates ate lunch while enjoying the spectacular view.

Swimming in the Dead Sea was an experience, too, she noted. Because it is 33 percent salt, the water is denser than most human bodies, making them even more buoyant. 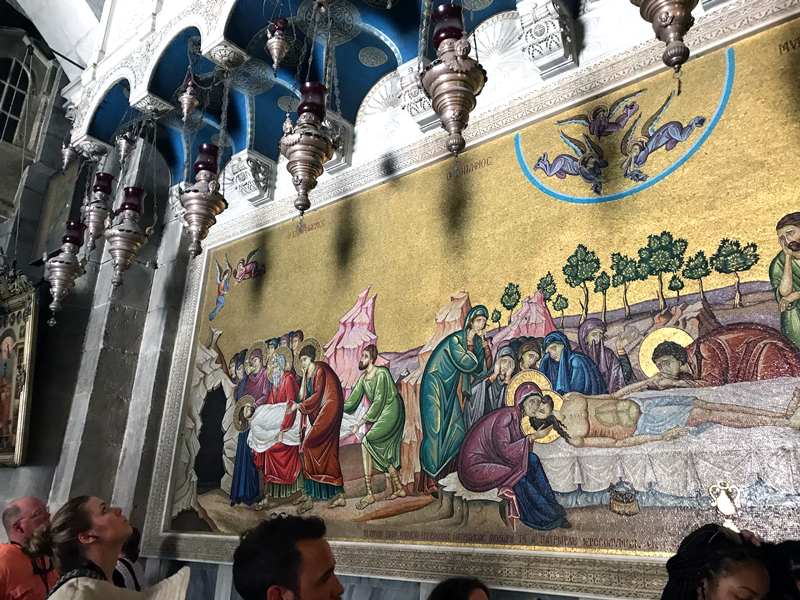 A mosaic of Christ’s body being prepared after his death in the Church of the Holy Sepulchre. This mosaic is one of three located inside the church. Courtesy photo

McMillian’s favorite place was Masada, an ancient fortification in the southern district of Israel. In the Bible, King David used the city to hide from his enemies. It was a secure place thanks to a huge mountain behind it and a water supply and system.

A story associated with the city made an impact on McMillian. It was about the mass suicide of 960 Jewish rebels, known as the Sicarii, to avoid capture by Roman troops at the end of the First Jewish-Roman War in 66 CE. According to first century Romano-Jewish scholar Titus Flavius Josephus, the people, who often raided nearby villages, hid there in plain sight. Every time the Romans tried to climb the mountain to get to them, they were stopped by falling rocks. The troops then decided to burn down the wall but ended up burning themselves instead. So they made their Jewish prisoners build ramps. Once completed, the Romans promised they’d be back the next day to eliminate the Sicarii.

The Sicarii, however, decided to commit suicide instead of being taken captive. They burned their jewelry to keep it out of the hands of the Romans but left food and water to show they died because they chose to, McMillian said. The next day, when the Romans came back, they were surprised at what they saw. Two Jewish women, who hid from the Romans in the sewer following the siege, were able to pass along the story of the Sicarii.

The team rose early each morning, grabbed breakfast then boarded transportation to explore the country. Some trips were 15-minute drives, while others were took two hours. McMillian said she was never bored on the trips to the sites because of their guide, who had story after story about the places they were passing and visiting.

“Our tour guide was the best,” she said. “The amount of knowledge he had was ridiculous. He just knew it all. If we asked questions, he always had an answer.”

The Flames did play some basketball while in Israel. They beat an Israeli women’s team twice and lost once to a men’s squad.

The former Lady Mustang said she has read the Bible but has a deeper love for scripture now that she has seen the places described in the book. It has increased her faith in a way she can’t explain.