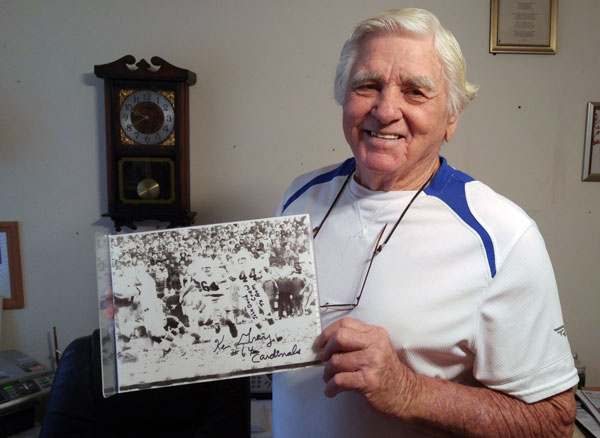 Former Llano High School graduate and coach Ken Gray holds a photo of himself playing as a St. Louis Cardinal. Gray will be inducted into the Texas Sports Hall of Fame in February as part of the 2016 class. Staff photo by Jennifer Fierro

KINGSLAND — Getting a camel through the eye of a needle is tough. But former Llano High School and professional football player Ken Gray said those playing his position might have it even tougher.

The Kingsland retiree knows a thing or two about how tough it is to be an offensive lineman. After his high school and college years on the gridiron in the 1950s, he spent 14 years at the professional level: 13 seasons with the Chicago/St. Louis Cardinals and one with the Houston Oilers. His pro career spanned from 1958 to 1970.

Finally, after more than 45 years since last taking the field, Gray is getting a bit of love.

The Texas Sports Hall of Fame selected Gray as a member of its 2016 induction class. As soon as he was told of his selection, Gray toured the hall, which is located in Waco, and even loaned museum officials some of his personal items to display.

“You walk through there; it’s quite humbling,” he said.

He still credits then-Howard Payne University offensive line coach Jack Brewer for giving him a chance. Gray recalled playing basketball at the Llano High School gym one day during his senior year in 1954 when Brewer walked in and offered him a football scholarship. Gray, who was married by then, asked Brewer if having a wife and a child would be a problem at college.

The coach didn’t waver but made arrangements for Gray to bring wife Shirley and son Boyd to the Brownwood school.

After four years of college, the Green Bay Packers drafted Gray but cut him before the 1958 regular season started.

“Green Bay said, later on in my career, the worst personnel mistake they made was cutting me, which made me feel really good,” Gray said. “(Ray) Scooter McLean was the head coach when I was drafted. ‘I hate to tell you this, (the coach told Gray one day), but I’m going to let you go. You’re a great prospect, and you’re going to play somewhere in this league.’ My heart went to my feet, but what could I say? They fired him at the end of the year.

“Those experiences make you a better person and better player,” he added. “You know what it is to be rejected. It makes you work hard. You’re not so cocky and sure of yourself.”

After word spread of the Packers’ decision, Gray had several calls from other teams wanting him to try out for them. He settled on the Chicago Cardinals because he had to drive through Illinois to get back to Texas. Needless to say, he didn’t make it back to the Lone Star State until after the 1958 season ended.

His playing career is highlighted in black-and-white photos. There’s one of Gray blocking a New York Giants player in a mud bowl in 1964 in which all the players showered in full uniform during halftime. There’s another of him diving head first to get a ball and one of him getting a little revenge on the Packers by snatching a fumble and returning it to the two-yard line. And then there are the photos of him talking with his coaches and teammates.

“A lot of really good memories,” he said as he pointed to different photos. “I played against a lot of 300-pounders. I never played against one I couldn’t beat. Their agility is somewhat lacking. I think I had a lot more agility than those guys.”

In his NFL playing days, Gray stood 6 feet 2 inches and weighed 260 pounds. He was a seven-time All-Pro and a four-time consensus selection. He was named to the Cardinals’ All-Time Team and the NFL All-1960s Team.

“I loved to pull and lead and trap,” he said in regard to running plays. “Pass protection was my least favorite thing because you’re a shock absorber; you have to stay in front and block. You’re more passive than aggressive. You don’t want him to get around you and get to the quarterback.”

He laughs when he talks about his first NFL contract in 1958 — $6,000 — and said when he began playing, there were six NFL East teams and six NFL West squads with no American Conference.

You can guess what he thinks the biggest difference is then and now in the NFL.

“It’s a 12-month job,” he said about today’s game. “Why would you jeopardize your contract if you’re any good? Your contract is in the millions.”

The reason he left the Cardinals was because he flunked his physical — bad knees. But that didn’t stop Wally Lemm, his old line coach with the Cardinals, from calling him after Lemm was named the head coach at Houston. Gray told him about the physical, but Lemm wasn’t concerned. So Gray drove to Houston from the Highland Lakes, his and Shirley’s permanent home, for a physical.

“Doctors said, ‘Oh yeah, you can play,’” Gray said with a grin. “My knees were so bad I couldn’t play any day except Sunday.”

After his playing days, he had both knees, both shoulders and one hip replaced. But he wouldn’t change a thing, he said.

He began playing at 5 when his dad bought him a football. He spent his junior high years at San Saba, his first two years of high school at Cherokee and his final two years at Llano High School.

“All through college, once the game started, I never left the field,” he said. “Many games I played, I never went to the sidelines until the quarter ended, at the half or when our game ended. Our practices in college were horrendous. They had to work you very hard to get you in shape. We had a lot of wind sprints, a lot of bear crawls so you could play an entire game. When I went to the pros, I thought it was the easiest thing I’d ever done.”

After he retired from pro football, Gray coached at Llano for three seasons, guiding the Yellow Jackets in 1975 to an 8-3 record and two playoff wins, which is still a program record. His son Boyd was the quarterback.

While Boyd played linebacker for Angelo State University’s 1978 NAIA national championship team, his dad was coaching the line for the Denver Broncos, which lost 27-10 to the Dallas Cowboys in Super Bowl XII that year.

As Gray walked from one part of his “man cave” to the other in his and Shirley’s Kingsland home, he pointed out different mementos such as photos of himself as a player and those of his sons Boyd and Shane and grandson Garrett, all in their high school uniforms, and the spot where he still watches old football film and other ballgames.

“Football is a culture in the state of Texas, and that’s a good thing,” he said with a smile, “The Lord has blessed me in so many ways. I pretty much get up and thank the Lord for what He’s done. He’s been awesome. It’s pretty nice not to have to grow up. Every time I do something kind of silly, my beautiful wife asks me, ‘Are you ever going to grow up?’”

IN THE GARDEN: You can't beat beets in the fall