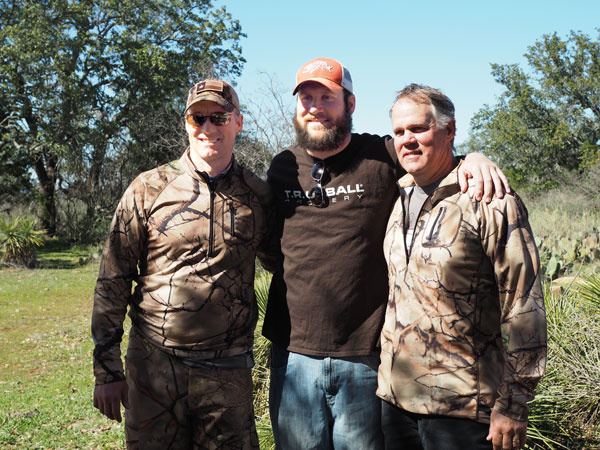 Pittsburg Steelers quarterback Ben Roethlisberger (center) gets one last photo with his father, Ken (right), and 'Gridiron Outdoors' host Mike Pawlawski at Reveille Peak Ranch before heading home. The two Roethlisbergers are the guests on an upcoming episode of the Outdoor Channel series. Pawlawski and his crew filmed Ben and Ken on a four-day hunt at the Burnet-area ranch. Staff photo by Daniel Clifton

BURNET — For a big chunk of his year, Ben Roethlisberger takes on the role of “Big Ben,” the Pittsburg Steelers quarterback. He’s worn the jersey since 2004 and guided the Steelers to two Super Bowl titles.

“It’s what I do, but it’s not who I am,” Roethlisberger said. “So many people know you as ‘Big Ben.’ But I’m also Ben Roethlisberger. I do a lot of things.”

For four days in late February, Roethlisberger spent time doing something he also loves and that helped shape him into the man he is. He went hunting with his father, Ken Roethlisberger. The two joined former NFL quarterback Mike Pawlawski on a feral hog hunt on Reveille Peak Ranch just outside of Burnet. Pawlawski, the host of “Gridiron Outdoors” on the Outdoor Channel, and his crew filmed the four-day excursion, which along with the hunt included a long-range shooting exercise under the tutelage of a retired Navy SEAL.

For Roethlisberger, however, one of the best things about the trip was getting outdoors with his dad.

“My dad is one of my best friends,” he said. “A lot of that’s because of the time we spent outdoors when I was growing up.”

That’s one of the things Pawlawski loves about doing Gridiron Outdoors. While the program focuses on hunting with current and former college and professional players and coaches, it also shows people a much different side of these men than they might otherwise see. Pawlawski recalled his own experiences at the professional level for part of the reason behind this type of program instead of a more simple “hunting with Joe” scenario.

“I remember running out onto the field in Miami (for a game) and people were calling me all sorts of names,” he said. “They saw me as a player, this guy with this number on my jersey, not as Mike Pawlawski. And we all know that’s part of the game. So what I try to do is really give people a chance to see these guys as more than athletes or coaches. Give them some insight into who they are beyond the field.”

Hunting and just getting outside in general is a great way to show that.

Roethlisberger agreed that hunting and the outdoors allows him to be just Ben, a guy hunting with his dad.

“These are those times I can just be with my dad, talking and enjoying being outside,” he said.

Looking back at his own life, Pawlawski pointed out some of the best times he had growing up in Southern California were getting outdoors with his own father, Gary. His dad realized the benefit of going fishing and hunting for a father and his son.

“My dad didn’t know how to fish when my brother and I were born,” Pawlawski said. “He said if you’re going to be a father, you have to teach your boys how to fish. So he taught himself to fish.”

Fishing and eventually hunting became a time for the Pawlawski men to relax and bond. Even when Mike Pawlawski would get time off from college football at Cal or during his professional years, his stops back home often meant going fishing.

Hunting and fishing were always a part of his life, even during his professional football days when he guided on the side. When Pawlawski’s professional career (which included the NFL, XFL and arena league) ended, he had already built up some contacts and skills in the TV production world as an announcer for Cal State games, so he began a foray into outdoor TV.

He eventually created “Gridiron Outdoors,” which airs on the Outdoor Channel. The show follows football players and coaches as they take on big game around the world.

“The show, I think, really gives people a chance to get to know these guys, not just some guy on the football field,” Pawlawski said. He also tries to include the family of the coaches or athletes whenever possible. “Those are some of the finest moments on the show.”

While Pawlawski takes his guests around the world (New Zealand remains a favorite of his), he thought he’d give Texas a chance for this episode (which should air in the next several weeks). For one thing, since Roethlisberger plays during the fall, which is when most hunting takes place, Pawlawski needed a ranch for wild pigs. He reached out to Reveille Peak Ranch owner Vol Montgomery about shooting an episode on the facility, located northwest of Burnet. Montgomery agreed.

The Highland Lakes hunt also gave Pawlawski a chance to try out his latest camo gear, GO Wild Adaptive Camo (gowildcamo.com), in Texas. The style, created with researchers and the latest scientific gatherings on animal sight, is based on a multi-layered/multi-tiered algorithmic design that led to the development of four different patterns that work in the four basic ecosystems.

As for the success of the hunt, people will have to tune into that episode of “Gridiron Outdoors” (go to outdoorchannel.com/gridiron-outdoors for schedule). But beyond the actual hunt, Roethlisberger was all smiles getting a few days off in the woods with his dad.

“I love spending time outside with my dad,” he said. “I hope to do this with my own son as well. And, you know, I can’t wait to go hunting with my son and my dad together. Those will be some incredibly special times and wonderful memories.”