Night of Laughter Benefit is the Best Medicine 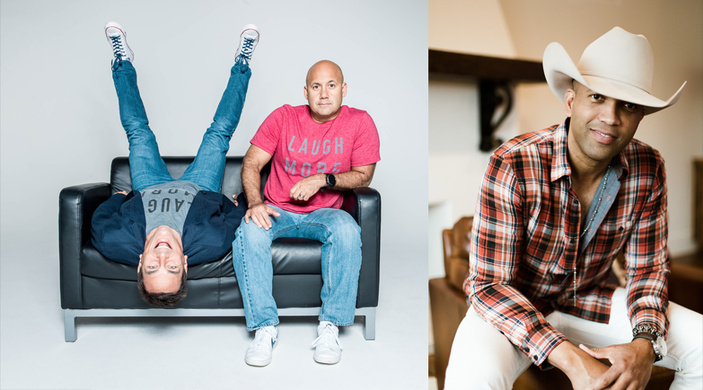 The Skit Guys, the Christian comedy duo of Tommy Woodward and Eddie James, and country singer Coffey Anderson are performing Thursday, Nov. 29, at First Baptist Church of Marble Falls, 901 La Ventana Drive, as part of Night of Laughter, a flood relief comedy benefit. The event starts at 7 p.m. Tickets are $10 and available at fbcmf.org. Courtesy photos

Night of Laughter Benefit is the Best Medicine

Just be prepared to laugh.

That’s the best way to describe the upcoming Night of Laughter, a benefit for Highland Lakes flood victims, which features The Skit Guys and country musician Coffey Anderson.

First Baptist Church of Marble Falls executive pastor, the Rev. Todd Hickingbottom, and church communication director Jonathan Sultemeier smiled when asked to describe The Skit Guys to someone who’s never heard of them.

“How do you do that?” Hickingbottom responded. “That’s a good question. I guess you could just say they’re two goofballs who, you know, put on these funny skits.”

Tickets could go quickly as word of The Skit Guys performance spreads to churches outside of the Highland Lakes.

“We’re already getting calls from churches in Austin about tickets,” Hickingbottom said.

The Skit Guys are Eddie James and Tommy Woodward, who became friends in high school and learned they had a penchant for making people laugh, something they still do. The two began sharing God’s word through humor and skits. Their act can also be very poignant.

They’ve grown quite a following, both in and out of churches, as they explore faith, God, and life through humor.

While The Skit Guys can go deep, Sultemeier said the plan for Night of Laughter is to keep things upbeat and humorous.

“We want the community to relax and wind down,” he said. The event also features Coffey Anderson, a country music artist who blends humor with his performances. A native of Bangs, Texas, who learned to play music on a borrowed guitar while attending Howard Payne University, Anderson has had about 400,000 song downloads on iTunes — without a record label — and performed on “Fox and Friends,” CMT, and BET. He also competed on NBC’s “Nashville Star.”

When the church approached The Skit Guys about performing a flood relief benefit, there was no hesitation on the duo’s part.

“We said, ‘You know what’s going on here, and this is what we’d like to do. Is there anyway you could come,’” Hickingbottom said. “And they jumped right on.”

“It was the same with Coffey,” Sultemeier added.

With tickets only $10 each — The Skit Guys tickets usually run about $30 — organizers will ask people during the show to consider donating more to the relief fund with all of it going to flood victims.

“It’s going to be a blast,” Hickingbottom added.

Sultemeier will post clips and more information regarding The Skit Guys and Coffey Anderson on the church’s Facebook page in the days to come.