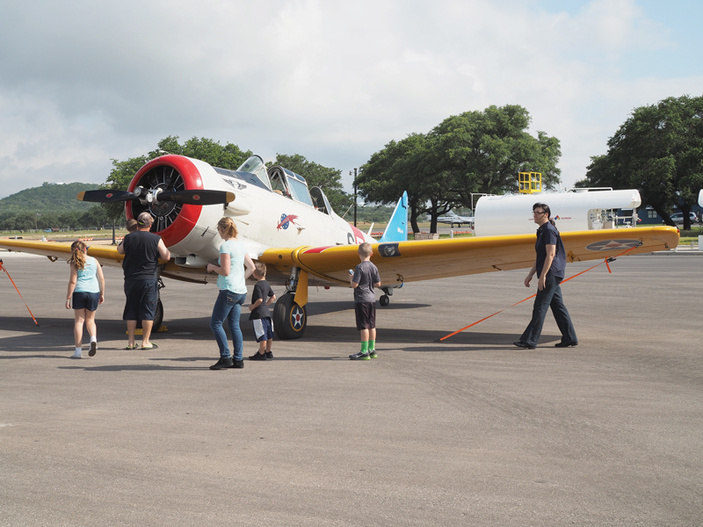 Get an up-close look at some World War II-era warbirds, such as this North American AT-6/SJN Texan, during the Highland Lakes Squadron of the Commemorative Air Force’s Open Hangar Day on Saturday, June 9, in Burnet. The squadron also owns an L-17 Navion and the ever-popular Douglas C-47 Skytrain known as the ‘Bluebonnet Belle.’ Staff photo by Daniel Clifton

BURNET — To Norris "Sonny" Croom and Ed Holley, the Highland Lakes Squadron's World War II-era aircraft and museum aren't just there to look at; they are pieces of American history that defined a nation.

“It’s a labor of love,” said Croom, adjutant of the Highland Lakes Squadron of the Commemorative Air Force. He was referring to the museum and the work of volunteers to keep the squadron’s aircraft flying. “We all do it for different reasons.”

The squadron wants share that love with the community and is hosting its Open Hangar Day from 9 a.m.-3 p.m. Saturday, June 9, at Burnet Municipal Airport, 2302 U.S. 281 South, where the museum is located. There is no admission, but visitors can leave a donation if they wish. Refreshments will be served, and rides in some of the aircraft will be available for a fee.

The elder Croom was a rifleman in the U.S. Army during World War II.

After his own son was born, Sonny Croom recalled seeing how his father bonded with the boy as he grew up. The topic of conversation that connected the two generations was World War II airplanes, and he hopes those warbirds have the same effect today on other families.

“We want to keep that bridge from then to now,” Croom said. “We want to make sure the kids don’t forget the sacrifices that were made that put us where we are today.”

“We want to help bridge the current generation and past generation to keep memories alive,” he said.

The squadron knows the best way to do that is to give visitors an up-close-and-personal view of the planes themselves. The Highland Lakes squadron has three aircraft: an L17 Navion, a North American AT-6/SNJ Texan, and a Douglas C-47 Skytrain known as the “Bluebonnet Belle.”

The Navion and the Texan will be available for 30-minute rides during Open Hangar Day.

The L-17 Navion is a small military liaison aircraft that also was used as a personnel and cargo carrier as well as a trainer. A flight during Open Hangar Day is $75 per person.

American and British forces used the single-engine SNJ Texan to train fighter pilots during World War II. It has room for the pilot and passenger only. Flights on June 9 are $295 per person ages 12 and older.

The museum's biggest attraction remains the “Bluebonnet Belle.” It will be back for tours and possibly rides after being in San Antonio due to engine issues. Organizers hope to have it ready for tours June 9, even if it’s unavailable for flights.

If it is ready for takeoff, flights are $99 a person ages 5 and older with at least 10 passengers per trip.

The "Bluebonnet Belle" was built in Oklahoma City in late 1944 as a C-47B. It then flew to Montreal, Canada, where it was transferred to Great Britain under the lend-lease program. The Royal Air Force used it as a transport, eventually sending it back to Canada, where it served the Canadian forces until about 1974. For the next 21 years, it was owned by a number of Canadian airline and charter companies until it was repatriated to the United States.

“That’s a good piece of history,” Croom said. Veterans receive a 20 percent discount on all flights. Organizers said their goal is to make prices fair while still charging enough to offset the cost of fuel.

While the planes are the main attraction, they are far from the only attraction. The museum has many displays devoted to people who flew during World War II thanks to donations. Visitors will discover a wide range of World War II-era artifacts.

“There’s a lot of original stuff,” Croom said. “We want to connect what they see in display cases with airplanes outside. We want to keep that part of history alive.”

Museum leaders are trying to get more people to visit the facility. They hope a new addition — an education officer — will help.

The Commemorative Air Force is making sure every unit has an education officer “to get our story out there to a wider aspect of the public,” Croom said.

Students are also invited to tour the facility and learn some of the history of these warbirds. Interested teachers may contact the museum at highlandlakessquadron.com or (512) 756-2226.

“I would like for them to see what’s involved in it,” Holley said of the younger generation. “We try to keep them flying.”