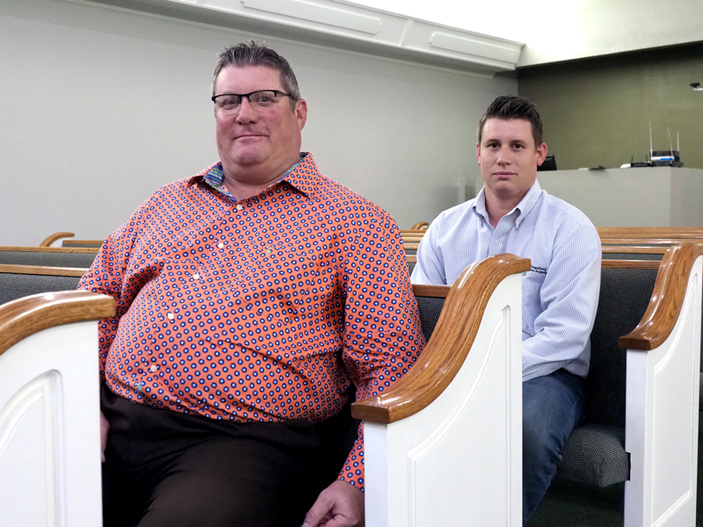 The Rev. David Smith (front) and the Rev. Joshua Smith of the Pentecostals of Marble Falls are getting ready to ‘rebrand’ the church as Sanctuary Marble Falls. The change is to help reach younger people, but the church is sticking with its Pentecostal roots. The change happens Sunday, June 24. Staff photo by Daniel Clifton

MARBLE FALLS — The Rev. David Smith of the Pentecostals of Marble Falls knows what the power of the Gospel of Jesus can do in a person’s life. It’s something he’s helped share with people for more than 30 years, 28 of them at the Marble Falls church.

He also realizes that, as younger people either stay away from church or seek a less traditional setting, it’s hard to share Jesus’s message with them.

“We’re trying to represent ourselves in such a way that this younger generation can relate,” Smith said. “And they’re looking for something more lively, more exciting, if that’s a way to describe it.”

So after a year and a half in the works, and four months of putting things in place, the Pentecostals of Marble Falls is “rebranding” into Sanctuary Marble Falls starting Sunday, June 24. The congregation is changing the look and feel of the church along with the new name.

Smith pointed out that it’s hard to share the Gospel with people if they’re not setting foot in the church. It’s not just an issue the Pentecostals of Marble Falls face. Many churches, particularly mainline denominations, are also dealing with the issue. As younger people, many who have little or no ties to a church, begin forming their own lives and exploring their faith, they are often first drawn to more “contemporary” or less formal or traditional churches.

Some churches are, and have been, holding services that feel more like live concerts than traditional worship with the goal of getting people in the door.

Smith and the Marble Falls church aren’t bringing in a battery of multi-colored concert lights and smoke-generating machines for the rebranding. The church is, however, increasing their online and social media presences.

“It used to be you would just drive around town, see a church’s sign, and go there,” Smith said. “Today, these younger adults, they do it all on their phones. We need to be able to meet them there.”

He’s quick to admit he’s not very adept at social media, but the church has built a strong team of younger members who are picking up those areas to help engage and interact with people. The rebranding includes a complete revamp of the church’s website.

The church already offers two services: a more traditional one at 10 a.m. and a more contemporary one at 11 a.m., though Smith hesitates at the term “contemporary.”

While the church is rebranding, one thing that isn’t changing is the fundamental anchor of the congregation: sharing God’s word and love.

Though “Pentecostal” isn’t in the new name, the church will remain true to its Pentecostal roots.

Smith’s son, Joshua Smith, serves as the associate pastor and agrees this move is good for the congregation. He pointed out they aren’t changing the underlying message; rather they are adding new ways to reach out to people.

“We don’t want to lose everything that we’ve built over the year or our values and teachings. Those are still here,” Joshua said. “But we want to remain relevant, and that means reaching out to people in different ways.”

Along with a new name and rebranding, David Smith said the congregation is also stepping up its efforts in the community.

“We’re going to do more with the community than ever before,” the senior pastor said.

The church offers a host of programs and classes, including weekly meetings geared toward different ages and interests. You don’t have to be a member to take advantage of these fellowship opportunities; they’re just places to grow in your faith and make new friends.

As for the official unveiling of the new name and brand, the community is invited to the event at 9:45 a.m. Sunday, June 24, at the church, 407 Avenue N in Marble Falls. Go to churchofmarblefalls.com for more information.