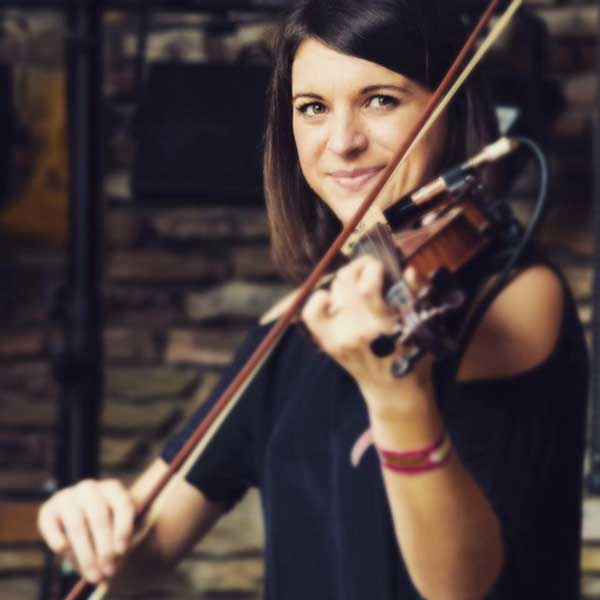 Niamh Fahy, a professional musician and violinist, leads a musical therapy program at the Phoenix Center in Marble Falls. Fahy, who toured with 'Riverdance,' shows youth how to use music to develop social skills, confidence and other attributes. But, she says, music also has a way of healing parts of the brain that other therapies might not be able to reach. Courtesy photo

MARBLE FALLS – It was one song, but for Niamh Fahy and the group of boys with which she was working, this was a major accomplishment, possibly life-changing.

The boys, participants in the Phoenix Center's innovative music therapy program, pulled together as a group, came up with some music and combined it with their own lyrics to create an original song.

"It was a rap," Fahy said with a small laugh. "For them, it was so empowering. This was their own song that they wrote."

But how does creating music qualify as therapy?

The brain, it seems, benefits from music, particularly if the person is suffering emotionally, physically or mentally.

Sarah Garrett, the founder and executive director of the Phoenix Center, is always on the lookout for innovative ways to provide services for the youth who come through the Marble Falls mental health program. She and her staff use play, equine and art therapies as well as a specially trained dog named Mabel to give kids suffering from any number of mental and emotional issues a chance to heal and grow.

"I've always been interested in music therapy, but I was always looking for the right person to lead it," she said. Music therapy, Garrett explained, has a way of helping a youth’s brain heal and grow in a way other more traditional therapies might not be able to.

That's where Fahy comes in.

As a lifelong musician — she started playing when she was 4 — Fahy always knew she would use music to help others. The native of Ireland went to college in the United Kingdom, but she didn't immediately jump into music therapy studies.

"I really didn't believe I had lived enough yet to become a therapist," she said.

So Fahy started a musical career, even becoming one of the violinists for the touring “Riverdance” show.

"I was in the middle of a tour with ‘Riverdance’ — and I loved it — but I didn't want to do it anymore," she said. "So I decided to go back (to college) and study music therapy."

Eventually, Fahy landed in Austin, where she continued working in music therapy as well as establishing a music career and a recording studio.

In Marble Falls, Garrett had been looking into the benefits of music therapy for the Phoenix Center. The center works, at no cost to clients, with children and teenagers who have undergone abuse, neglect or endured other serious trauma.

In September 2015, Garrett connected with Fahy and invited her to bring a music therapy program to the Phoenix Center.

Fahy often starts the program with the kids in a drum circle. Fahy, who facilitates the program but doesn't necessarily tell the kids what to do, explained that the rhythm the kids come up with helps calm them, can get their heartbeat settled and gets them to the point where they’re in sync with each other. Even if a youth doesn't really want to participate, Fahy allows them to make that choice, but they can't leave the circle. Instead, he or she stays and listens.

"Eventually, they join in," she said.

It's about empowering the kids to give them some control over their lives.

The simple action of tapping out a rhythm on a drum also helps trigger a healing process in their brains.

The drumming is only part of the music therapy program. Fahy includes other components such as songwriting. Generally, she introduces songwriting in a group setting in which the kids have to work together to create a song.

Which is what the boys did with their rap song.

Fahy adds one more step: The kids get to record the song.

"So the song, the music, the words — it all belongs to them, it's theirs,” she said. "And for some of the kids, that's so empowering and builds their confidence.

"Music has a way of connecting that (spoken) words do not," Fahy added. "And they can use music any way they want."

And music has a way of helping them heal.

Go to phoenixcentertx.org for more information on the Phoenix Center.