Pickleball has plenty of juice in the Highland Lakes 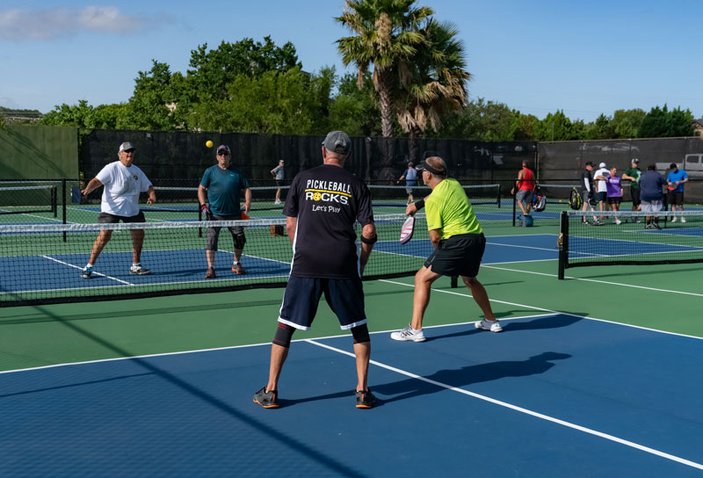 Open to Horseshoe Bay Resort members and guests only, the eight dedicated pickleball courts were built in 2018. Photo by Ronnie Madrid

Pickleball has plenty of juice in the Highland Lakes

Pick up a pickleball paddle, and you’ll quickly pick up a passion for the game, predict the local enthusiasts who have seen a recent explosion in the sport’s popularity in the Highland Lakes.

“What I really enjoy is seeing people who go out there one, two, or three times and get hooked,” said Dave Marsh, a retired oil engineer who helps coach tennis at Faith Academy of Marble Falls. “You can see it in their eyes.”

Called the fastest-growing game in America, the number of pickleball players in the United States increased 650 percent over the past six years, according to the USA Pickleball Association. About 85 new court locations open across the country every month.

Pickleball was created in 1965 by three men in Washington state who wanted to play badminton but couldn’t find the right equipment. They gathered together ping-pong paddles, a badminton net, and a Wiffle ball. They lowered the net when they discovered the ball bounced nicely on the asphalt surface on which they were playing. Over the next two years, they created a set of rules and the game took off. It was named, supposedly, after the dog of one of the inventors, Pickles, who kept running off with the ball.

The YMCA of the Highland Lakes at Galloway-Hammond was one of the first facilities to offer pickleball in the area. The sport doesn’t require the construction of new courts, just a regulation pickleball net in an existing gym. Pickleball players set up three nets in the First United Methodist of Marble Falls gymnasium, starting in 2016, for regular games five days a week. When the games end, they just take down the nets.

All these options bring in new players every day.

A former college football player whose injuries kept him out of the pros, Marsh first took up tennis to keep active and competitive. Now 68, he discovered pickleball at the YMCA in Burnet.

He watched what looked to him like a small version of tennis or a large version of table tennis for about three months before picking up a paddle himself.

“I went out there and really liked the game,” Marsh said.

Matt Laz, the pickleball pro at Horseshoe Bay Resort, said he’s seen players quickly take to the game after coming from other sports such as table tennis, racquetball, volleyball, basketball, and even chess.

Playing singles or doubles, the court looks a lot like a giant ping-pong tabletop, Laz said. The courts are smaller than in tennis and the ball is served underhand rather than overhand. Also different from tennis, the court has a line to prevent players from getting too close to the net.

Although early adopters saw the sport as an alternative to more physical games as they reached retirement age, pickleball is growing in popularity among all age groups, including youngsters.

“I feel confident to predict that we’re about to see the junior pickleball boom,” Laz said.

“For kids, you can’t learn how to play tennis in a week at camp,” Laz said. “With pickleball, in the matter of an hour, you kind of feel like you’re awesome at it.”

“The kids at Faith (Academy) have been bugging me to take them (to the pickleball courts) after tennis practice,” Marsh said. “They love it.”

The three courts at First United Methodist Church of Marble Falls are popular with all age groups with up to 30 people playing every day.

“We’ve taken people who probably never played anything, any sport, and they may not do it as fluidly as somebody who’s played tennis or racquetball or something else, but they learn to play and they’ve learned to play OK,” said Susan Tope, who brought the sport to the church when she and her husband, both avid players, moved to Marble Falls from the San Antonio area.

Regardless of age and ability, Laz said people who pick up pickleball enjoy it because of the rush and excitement of the close competition.

“It’s meant to be played calm, (but) it’s almost impossible to stay calm because you’re so close to your opponents,” Laz said. “We call it ‘pickleball panic.’ There’s a rush of banging a Wiffle ball back and forth at each other. It’s exciting whether you win or lose the point.”

YMCA of the Highland Lakes at Galloway-Hammond
1601 S. Water St. (US 281 South)
HOURS: Monday-Friday from 9AM to noon
COST: $5 a day or become a YMCA member
More competitive games can be found at the YMCA in Burnet, where players test themselves in area tournaments.
FOR MORE: Call Stephanie Ivey at 512-756-6180 or visit ymcagwc.org

WHAT IT TAKES TO PLAY

Getting started is easy and inexpensive. You’ll need athletic shoes and clothing appropriate to the court, whether indoor or outdoor. Pickleball sets for two to four players, including balls and paddles, run between $20 and $50 and can be found at any sporting goods store.
While Horseshoe Bay Resort has a pickleball pro, players at public courts eagerly help newcomers get up to speed on the game. Newbies can also hire coaches or go online to watch tutorials.
“When I first started playing in 2011, there weren’t too many pickleball videos,” said Matt Laz, the pickleball pro at Horseshoe Bay Resort. “If you’re a beginner, now you can definitely get on YouTube and learn how to get the basic fundamentals down.”
You also can watch world-class pickleball players on TV and online to see how the best play the sport.
“When people see it played at the highest level, it’s a little bit more fun and exciting to watch because everyone’s so close together,” Laz said. “The reflexes are amazing (as well as) power, touch.”
Laz said tournaments can be found throughout the year in larger cities in Texas. Horseshoe Bay Resort will host its first sanctioned tournament  — the Horseshoe Bay Senior Open — October 15-17.
The tournament gives senior players a chance to compete against similarly skilled players in their own age range in one of the best facilities in the region.
“We really want the vibe at Horseshoe Bay Resort to be that it’s the best place in the country to get knocked out of a tournament,” Laz said. “Once your play ends, the party begins.”