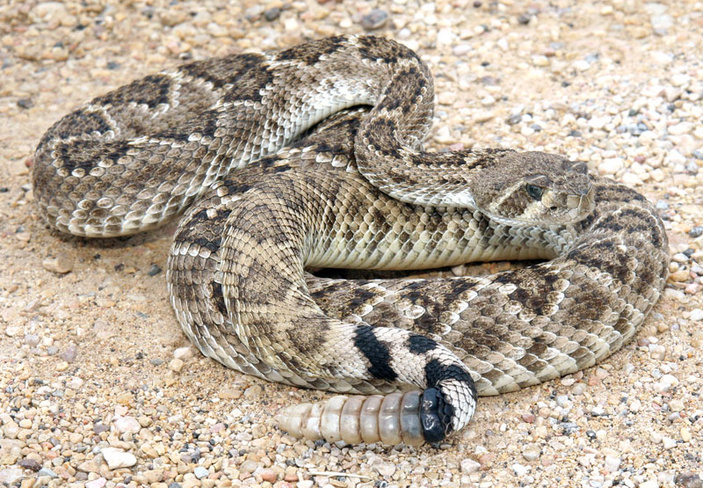 Western diamondback rattlesnakes are the most common venomous snakes in Texas. Identifiable by the diamondback pattern along the back and the rattles on the tail, diamondbacks are not the only snakes that rattle their tales when alarmed. iStock image

Spring in the Highland Lakes means two things: wildflowers and snakes. While enjoying the flowers, watch out for the snakes. Also, make sure the information you have on snakes is true. Myths abound about snakes, both venomous and not. Here’s what our research turned up when studying the subject of snakes.

False. Snakes give off an offensive musky odor as a defense mechanism. The odor comes from glands at the base of the tail and is produced at will. It has been pointed out that “if cucumbers smelled that bad, no one would eat them!”

False. A rattlesnake’s first line of defense is to sit still and hope it is not noticed. Rattling comes second — mostly as a plea to not step on them — when the snake feels interaction is unavoidable. If a snake is completely caught off guard, it is more likely to strike, without rattling, in self-defense.

False. Young snakes can control their venom and have less of it to inject. The amount of venom in a snake’s venom gland increases with the size of the snake.

“You can tell a rattlesnake’s age from the number of rattles.”

False. Each new segment, or “button,” on the rattle is added each time a snake sheds its scaly skin. How often a snake sheds is determined by species, age, and environment. Some might shed several times a year. Rattles that become eight to 10 segments long also tend to break off.

“Some snakes are aggressive.”

False. Snakes are shy, sedentary reptiles. They do not seek trouble. Quite the opposite, they don’t want to be seen. A snake is typically just as frightened as the person during an encounter and simply wants to flee as quickly as it can. Occasionally, when both the person and the snake try to flee in the same direction, it can be misconstrued as snake aggression. A snake’s defense mechanisms (striking, lunging, hissing, or rasping) can certainly be interpreted as aggression.

“Only venomous snakes have triangular heads.”

“Cottonmouths always swim with the entire body visible on water.” 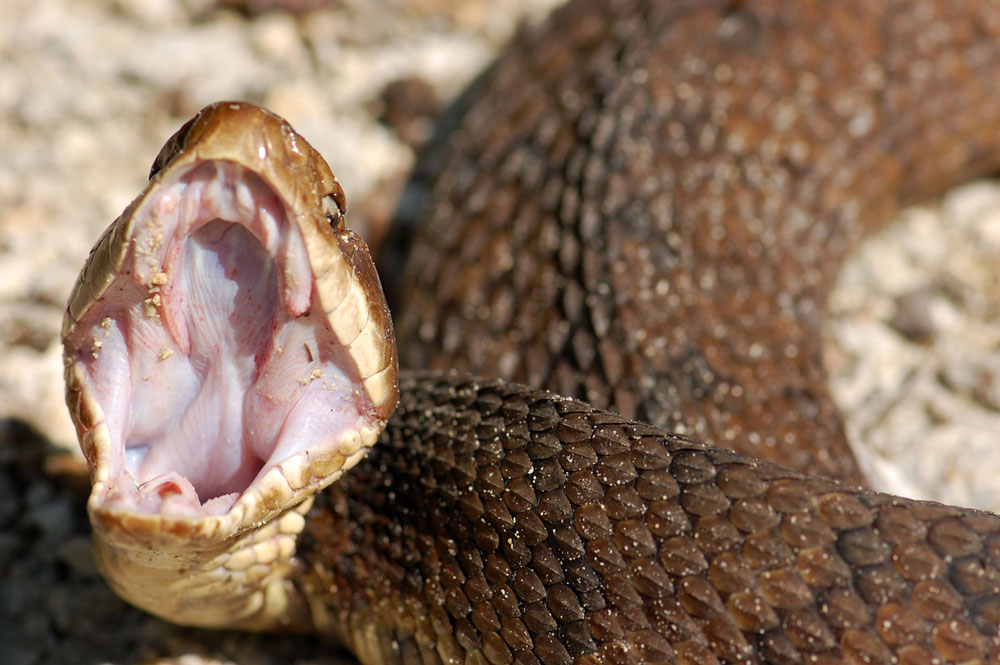 Cottonmouth, also known as water moccasins, have thick, heavy, dark-colored bodies and are often found near water. They are known for their open-mouth warning, which exposes the white tissue inside. The myth that they only swim on top of the water is not true. iStock image

False. Cottonmouths often do swim on top of water, but they also swim submerged. Any snake is capable of swimming both on or under the surface.

False. Come on! Snakes can and do strike underwater, specifically water snakes and any other snakes that prey on fish.

“All venomous snakes have elliptical pupils.”

False. Only rattlesnakes HAVE rattles, but many venomous and nonvenomous snakes vibrate their tales when startled, producing a rattle sound.

Another myth: the red-black-yellow rhyme used to distinguish coral snakes from similarly colored non-venomous snakes is NOT to be relied on.