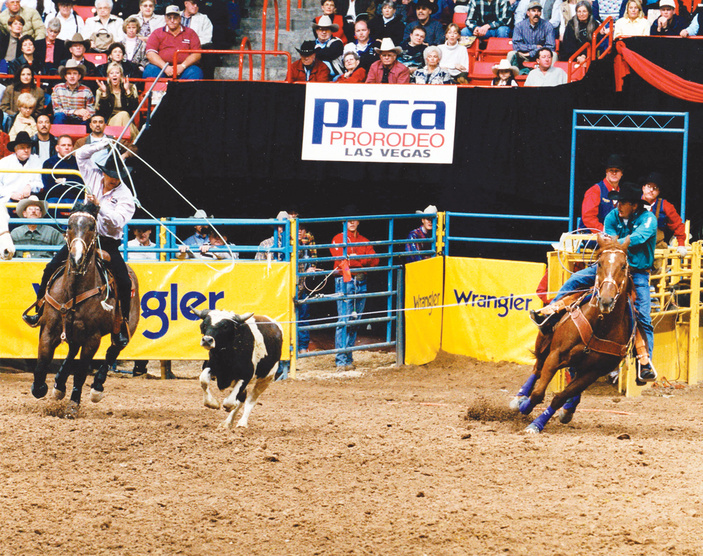 Rich Skelton (left) and partner Ken ‘Speed’ Williams compete during a past Professional Rodeo Cowboys Association world finals. The duo won eight consecutive world championships from 1997-2004 and will be inducted into the ProRodeo Hall of Fame on Aug. 4. Courtesy photo

LLANO — Ken “Speed” Williams and Rich Skelton ruled the rodeo arena when it came to team roping. The duo were crowned with a record eight consecutive Professional Rodeo Cowboys Association world titles from 1997-2004.

The duo are about to rope in another accolade: Each will be inducted into the ProRodeo Hall of Fame on Saturday, Aug. 4, in Colorado Springs, Colorado. The PRCA announced they are headlining the 2018 class, which also includes legendary barrel man Leon Coffee, a Blanco native.

“We hoped that, one day, it would happen,” said Skelton, who was the heeler. “We had some luck and success. It’s overwhelming.”

“We both had the same common goals,” added Williams, the header. “We both wanted to win a world title. It was the right time. All the marbles fell into place.”

Williams, who is still competing, is one of six team ropers to qualify for the National Finals Rodeo as both a header and a heeler.

Team roping is a two-person sport featuring a header and a heeler. When the steer is released from the chute, the ropers race after it with the header lassoing the animal’s horns and turning it, allowing the heeler to come in and rope its hind legs. The team with the fastest time wins.

While their accomplishments are impressive, their humble beginnings as a team are awe-inspiring.

Skelton had first teamed with Tee Woolman, also of Llano, while Williams had partnered with Clay O’Brien Cooper. Woolman and Cooper decided to return home in 1997, while Skelton and Williams still wanted to compete. They were both on the road in the Pacific Northwest at the time. Their options were to return to Texas or find new partners.

“We decided to stay and rope together and see how it turned out,” Skelton said.

The two won at Pendleton, Oregon, in the first two weeks of their partnership, and that quick success fueled them to keep going.

They ended the year by winning their first world championship, an unexpected feat, Williams said, because they’d only been roping together for a few months.

Skelton said the secret to their success was the two thought of little else other than roping. They practiced morning, noon, and night – always looking for ways to be faster and better.

Williams even moved into an apartment built in Skelton’s barn in Llano for a couple of months.

“We did whatever it took to get the job done,” Williams said. “You have to have a work ethic and a willingness to practice.”

Williams compared their partnership to a marriage, noting there were negotiations and things each had to give up for the team to succeed. It also took a lot of hard work.

“When you win, it makes it a lot easier to move forward,” he said. “Frustration comes when you don’t win. (Skelton) always put in the effort. He always wanted to practice, always wanted to try to get things better. That was a trait we both had.”

They also had great horses, Skelton said, which played a huge role in the team’s success.

Then, there was Williams the innovator, who is credited with changing the sport of team roping. He created a new style of swinging the rope in the box that lowered catching times and won money.

“He could rope in those small arenas real fast,” Skelton said. “They all adapted to his style. We had great horses, and everything came together at the right time.”

Skelton said that, as a kid, he dreamed of becoming a roper. He grew up in Electra near Wichita Falls and, every chance he had, worked on the craft.

Williams began roping before he could walk. By age 14, he had a bank account filled with winnings. He earned his PRCA card in 1988 and competed in the Southeastern Circuit in calf roping and team roping as a heeler. He captured the 1995 Dodge National Circuit Finals Rodeo all-around title. 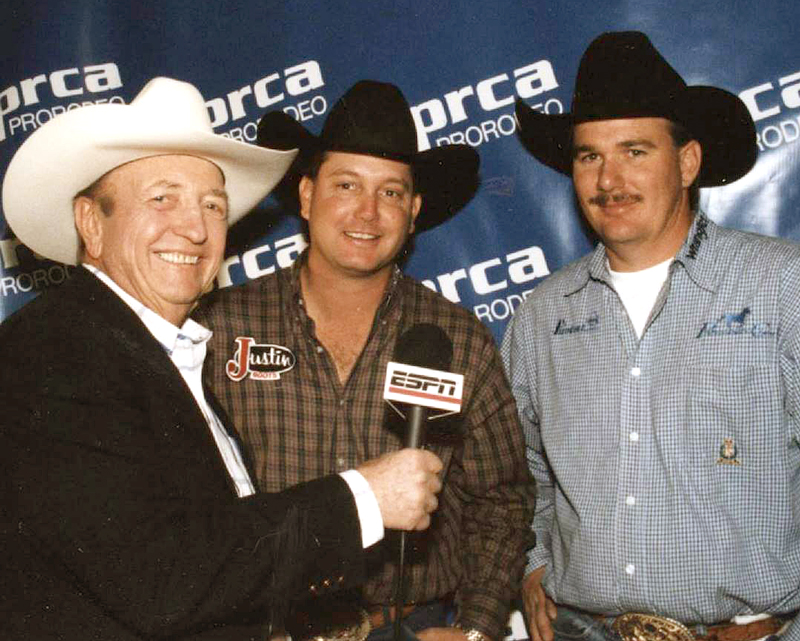 In 1988, Williams was heeling for Casey Cox. That year marked Williams’s first trip to the National Finals Rodeo, which is held in Las Vegas. The experience inspired him to return home and switch to heading as he believed there were more improvements to be made on that side.

And he was right.

“It’s all about how you practice and coming over to the rodeo and preparing,” Skelton said.

He noted the arena in Las Vegas is small, and that means fast times. Williams’s unique roping style enabled him to head the steer more quickly.

“He hardly ever missed,” Skelton said. “He could turn them all fast. My role was to rope every steer by (its) two feet. I needed to make sure and not make a mistake. He threw the first rope, and I threw the back feet.”

Team ropers must finish in the top 15 in the world in earnings to qualify for the finals. Money won at the event plus earnings leading up to the finals are tallied together. The team that has the most money wins the world championship.

Skelton said he thought winning one championship was unobtainable, but, like most athletes, after getting one title, the duo wanted more.

“Winning a world title was a lifelong dream,” Williams said. “Lifelong dream was to win one. To make sure it wasn’t a fluke was to win the second one. Then, you want to maintain and keep winning. I didn’t dream of winning eight world titles. You kind of keep it going as long as you could.”

Today, Williams offers private lessons and clinics and has numerous videos on his website, speedroping.com. Two of his best students are his children: Hali, 14, and Gabriel, 11.

So far, Hali has won $70,000, while Gabriel is turning his attention to full-time roping.

“My goal is to teach them how to be successful in life,” Williams said. Skelton was in California when he got the call from the Hall of Fame last spring. He immediately called his wife, Rhonda, and his 14-year-old daughter, Rainey. Both are barrel racers.

“A lot of times, they induct people after they get old or died,” he said. “I’m 52 and still competing. I have a lot of good sponsors. I’m still active, and I owe it to them to compete.”

Williams summed up the feelings of the two on a successful career and an incredible partnership.

“I feel very fortunate in life,” Williams said. “I was able to do something I worked for my whole life.”