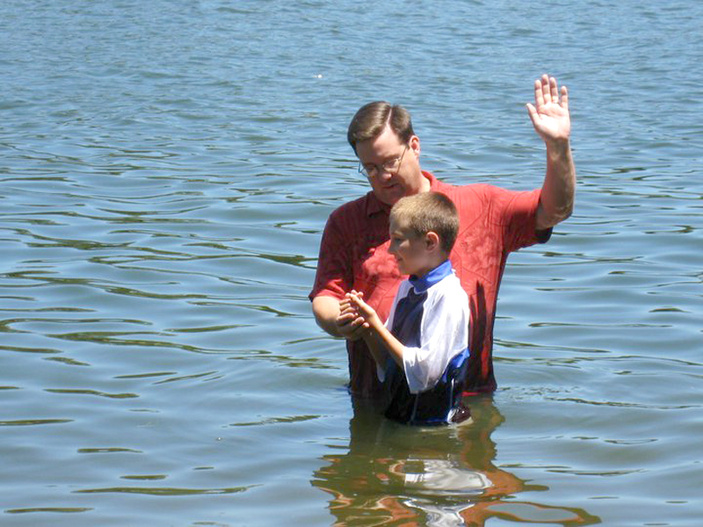 The Rev. Phillip Way baptizes a young Providence Reformed Baptist Church member. The church started in Round Rock in 1997 before relocating to the Highland Lakes in 2009. It held services in several locations over the past eight years before finding a permanent spot at 3415 U.S. 281 in Marble Falls. Easter Sunday, April 1, will be the first service held at the new location. Courtesy photo

MARBLE FALLS — Stepping out on faith seems embedded in Providence Reformed Baptist Church’s spiritual foundation. After all, this is a church that probably wouldn’t exist had the lead pastor’s call to an Austin-area church more than two decades ago worked out.

“Yeah, we call it a replant,” said the Rev. Phillip Way over a cup of coffee.

He was referring to when Providence left its Round Rock location in 2009 and relocated to the Highland Lakes. Way has been making that drive several days a week from Round Rock, where he also works as a real estate agent. As the pastor of a smaller congregation, Way supplements his pastoral work with the financial boost of selling properties.

The church first resettled in Kingsland then made Faith Academy of Marble Falls home base before moving to Harmony School of Creative Arts.

On Easter Sunday, however, the congregation will celebrate the resurrection of the Lord in its new permanent location at 3415 U.S. 281 in Marble Falls. Though a building doesn’t make a church, Way and his congregation are excited about the move and what it means.

“This will give us opportunities for fellowship and events,” Way said. “In the other places, it wasn’t our space, so we had to come in and set up each morning and then have everything taken down and out by 1 (p.m.). It will be nice to have a permanent place.

“It will help in number of ways,” he added. “We can have our own sign out front. It’s our own building, so we can (configure it) for how it best works for us.”

Providence Reformed Baptist Church started April 16, 1997, as a handful of people gathering in each others’ homes. Way initially came from a church in Lubbock to the Austin area to pastor a different church. When that appointment didn’t work out, instead of returning to Lubbock or seeking another Central Texas church to pastor, Way found himself among a half-dozen other people regularly meeting in living rooms to worship and share the Gospel.

“(Starting a church) hadn’t been anything I planned to do,” Way said, “but if God’s will put us here, I thought, let’s see what happens.”

Providence Reformed Baptist Church grew roots in the Round Rock community. Those roots sprouted into a small but dedicated congregation. Whether it was intentional or just God’s will working through the congregation, several of the Providence elders and leaders ended up seeding or leading other churches across the country. Way rattled off a list of former Providence church members who lead churches as far away as Virginia.

“We’re a little group, but what we see is people coming, getting equipped, and spreading the Gospel,” Way said.

Everything was rolling along at the Round Rock church, but in 2008, many of the congregation members headed off in different directions. With the economic downturn that year, several sought new careers, others went on to further their education, and regular attendance slipped. One thing Way noticed was that several of the congregates traveled from Burnet, Liberty Hill, and other Highland Lakes towns to attend worship at Reformed’s Round Rock location.

Church leaders cast their eyes west to the Highland Lakes and, in 2009, made the move.

“If people were willing to drive an hour or more from out here once a week to worship with us in Round Rock, we wanted to affirm them and recognize what they were doing,” Way said. He admitted this was a true “replant” not just a move. “It wasn’t like moving to a new building across town.

“For us, it was asking, ‘Where is there a need, and where can we meet the need?’” the pastor added.

Though Providence Reformed Baptist Church is small in comparison to many other churches, the size has its benefits.

“What we can do as a small church, we can do on a very personal level,” Way said. “I want to know everyone that’s here. You can’t come in here and hide. It’s a very connected and personal church.”

The congregation has never used its temporary locations as an excuse not to reach out into the community, but Way knew that if it could find a permanent spot, Providence Reformed Baptist Church could offer more programs and services during the week. Having a home of its own could also help the congregation grow deeper roots.

Way and church leaders kept an eye out in the Marble Falls area for a more permanent facility. When the building at 3415 U.S. 281 became available, Providence Reformed Baptist Church found its new home.

“It’s been fun, it’s been a journey, but we’re ready for the next step,” Way said. “We don’t always know where God is taking us, but as long as it’s God taking us, it will be all right.”

For more stories like this, check out our Highland Lakes Worship Guide.