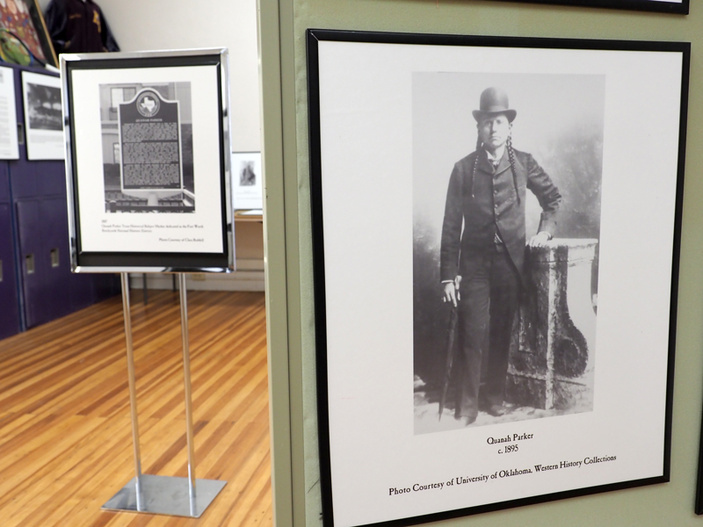 A portrait of Quanah Parker is part of the 'The Cynthia Ann and Quanah Parker Exhibit, a Woman of Two Worlds and a Man in Two Worlds' at Falls on the Colorado Museum. This is the second time the facility has hosted this exhibit and, because of demand, officials decided to bring it back. Staff photo by Daniel Clifton

The exhibit highlighting the story of a kidnapped settler girl who became the mother of a great Comanche chief has returned to the Falls on the Colorado Museum.

Due to demand, the museum brought back the “The Cynthia Ann and Quanah Parker Exhibit, a Woman of Two Worlds and a Man in Two Worlds.” It runs through Feb. 28.

It made its first appearance at the museum in 2016.

In 1836, 9-year-old Cynthia Ann Parker was living with her family in Parker’s Fort, “a solidly constructed civilian stockade” to protect settlers from Indian attacks and located about 40 miles east of present-day Waco. Because the fort hadn’t been attacked in months, residents became careless about safety and often left the gate open.

One night, several hundred Comanche, Kiowa, and Caddo Indians attacked the fort and took Parker, four women, and other children.

The leaders of each tribe divided out the prisoners, and Cynthia Ann went to the Comanches. As she grew up, she embraced their culture and lifestyle. She went by the Comanche name of Naduah. At 17, she married a rising Comanche warrior, Peta Nocona, and the two had three children. Peta Nocona was so happy with his new wife that he rejected polyamory and was monogamous to her.

The Texas Rangers kept a close eye on Peta Nocona, who was leading successful raids on settlers. In 1860, during a Texas Ranger attack, Peta Nocona was mortally wounded, and Cynthia Ann and her daughter Prairie Flower were returned to her uncle, who was living in Birdville.

Cynthia Ann tried to run away but failed. Her daughter died of influenza and pneumonia in 1863. Cynthia Ann suffered the same fate seven years later.

Her oldest son, Quanah, who was a teenager when his mother was returned to her uncle’s family, became a politically influential leader and is considered the last Comanche chief.

He realized that, for the tribe to continue its way of life, it had to go to a reservation. While there, Quanah began building relationships with area settlers because the reservation land, located in Oklahoma, wasn’t good for farming.

He was known as an “assimilist,” which meant he retained his Comanche culture and introduced the ways of the “white man” by establishing schools and ranches. He built a home for his family, Star House, which is on Oklahoma’s endangered properties list.

Dr. Dan Gelo, dean of the College of Liberal and Fine Arts at the University of Texas at San Antonio, and Dr. Chris Wickham, UTSA professor in the Department of Modern Languages and Literatures, will give a special program on the Comanche culture at 1 p.m. Saturday, Feb. 9, at the Marble Falls museum.