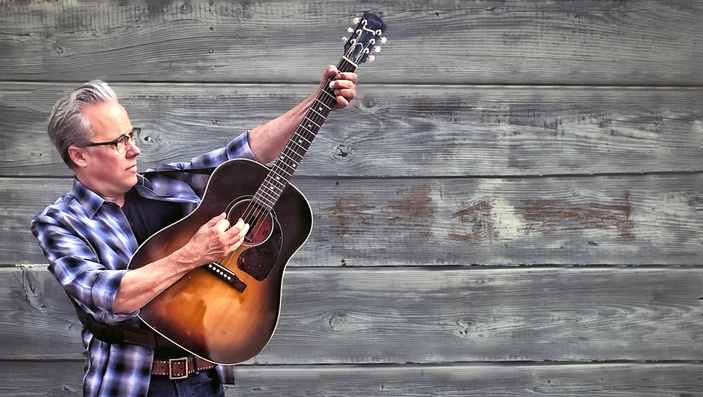 The Grammy Award-nominated Radney Foster brings his musical storytelling to Uptown Art House on Friday, June 1. The show opens with Drew Womack at 7 p.m. Tickets for the acoustic concert are $30 for general admission and $45 for reserved seating in advance at theuptownarthouse.com or $35 and $50, respectively, at the door. Courtesy photo

MARBLE FALLS — Just over three years ago, singer-songwriter Radney Foster was filled with anxiety after a bout with pneumonia and laryngitis stole his voice. Doctors told him it would return, but they couldn’t give him a timeframe.

“You have to understand, I’d go into the doctor’s office every week, and they’d tell me, ‘Not this week,’” Foster said. “It really messes with your head. It’s kind of an existential crisis for someone who sings for a living.”

The lack of a voice would plague Foster for several months, starting in the fall of 2015. However, Foster found another way to express himself during this time: short fiction.

“I got an idea for writing a piece of short fiction to just keep from going crazy,” he recalled.

He showed his first writing to his wife, who had been a magazine editor and journalist. She told him he definitely had a talent for it.

At the heart of his work, whether penning a song or short fiction, Foster is a storyteller, something that comes through in his latest project, “For You to See the Stars.” Foster will perform those new songs as well as some classics on Friday, June 1, at Uptown Art House, 218 Main St. The show starts at 7 p.m. with opening act Drew Womack.

Foster describes the upcoming acoustic show as more intimate compared to some of his other performances.

“It’s going to be a listening crowd,” Foster said. “We’re definitely going to have a lot of fun. There will be laughing, crying some, but they’re going to be listeners.”

Foster will also share snippets of his short fiction, reading part of a story before going into its corresponding song from the “For You to See the Stars” project.

You see, he didn’t stop writing fiction after his first piece.

“I kept writing short fiction the next year (after losing his voice) and probably wrote four or five haphazardly,” Foster said.

During this period, Shari Smith, a noted author and essayist, reached out to Foster about writing a song to go along with a book for her project “Trio.” Smith would send a book to a singer-songwriter as well as a visual artist and ask them to write a song or create a work of visual art inspired by the book.

Foster agreed, but, during another phone conversation, he mentioned he had written some short fiction as well.

“You could almost hear the dread on the other side of the line,” Foster recalled with a laugh.

But Smith told him to send her one of his pieces, and she called him about three days after getting the story and told him to keep sending her more. Under her guidance, Foster developed his writing.

Which brings us back to his current project, “For You to See the Stars.”

Eventually, Foster wrote a series of short fiction that went along with the songs off his new CD. Smith, through her publishing house, published the short fiction in a book of the same name.

Foster pointed out that songwriting and short fiction writing, while different, are also similar in that it’s all about storytelling.

Writing short fiction reaffirmed some of what Foster learned about songwriting from his mentors in the past: “Good songs are written; great songs are rewritten.”

“It’s really about honing your craft,” he said.

After several decades of singing and songwriting, Foster continues to do just that, always looking for ways to grow and change. He doesn’t want to be the same performer and put on the same show he did when he started in the business years ago. He’s seen other artists fall into that trap.

“I always applaud the guys, even if they fail, who try something different,” Foster said.

Foster released “For You to See the Stars” last September and it, as well as the work of short fiction, have earned strong reviews, by critics and fans.

While he’ll be performing pieces from this latest project, Foster isn’t tucking away his more well-known songs such as “Raining On Sunday,” “Just Call Me Lonesome,” and “Nobody Wins.” He’ll perform several during the show at Uptown Art House.

“People would revolt if I didn’t,” he added with a laugh. “But come out, we’re going to have fun. It’s going to be great.”

Pre-sale general admission tickets are $30, while reserved seats are $45. You can purchase pre-sale tickets at theuptownarthouse.com. Tickets at the door are $35 and $50, respectively. Go to radneyfoster.com for more on Foster’s current project and other works.