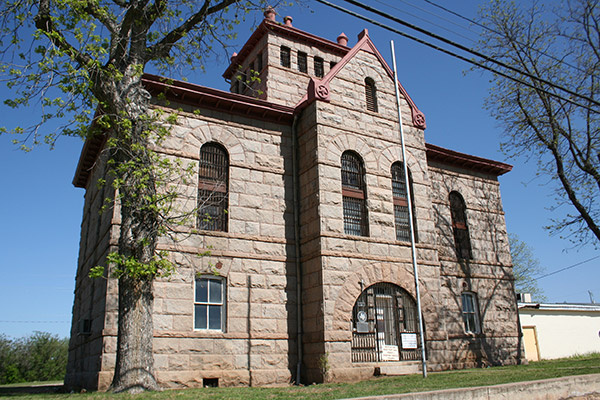 Members of the Friends of the Red Top Jail are raising money for renovations to the historic building so they can reopen it to tours. File photo

LLANO — This year’s annual meeting of the Friends of the Llano Red Top Jail will be unlike any other.

Attendees will be treated to a talk from guest speaker and author W.C. Jameson, get an update on renovations to the historic building and hear from Pat Beckham and Larry Payne, who are recording video testimonies from family members of some of the jailers.

“We want everyone to get involved,” said group vice president Martha Rowlett.

The Red Top Jail was built in 1895 and was in operation as the city’s lockup facility until 1982.

The projected total cost of renovations to the jail is between $350,000 to $400,000, which includes a $198,000 loan co-signed by the Friends of the Llano Red Top Jail and the city of Llano. That money was used to replace the roof and install 32 piers in March to stabilize the building. The structural instability is what caused city officials to close the facility about four years ago to tours because of safety concerns.

“The good news is the building isn’t going anywhere, it’s stable,” Rowlett said. “Fifty to 75 years from now, it’ll still be there.”

The next construction phase is replacing about 30 windows at the jail, Rowlett said. The existing windows have not been able to completely keep out rain or wildlife.

“Once the windows are complete, we can reopen (for tours),” she said. “We’ll have to get an OK from the city, but the building was never condemned.”

And while the floor has to be replaced and some other construction updates are still needed, Rowlett said the jail inches closer to hosting tours.

Just when, however, is still up in the air. That’s because the group has been trying to raise more money and pursuing grants for the windows and other construction needs. The total estimated cost of the renovations is less than bids from construction companies, which were between $1 million and $2 million.

The reason for the lower cost, Rowlett said, is because of caring people.

“We’re really thankful,” she said. “We’ve gotten good people to help us. We’ve gotten people to work and others who aren’t charging an arm and a leg.”

As for the video testimonies, one is with Charles Baldwin, who was raised by his single mother. Back then, if a woman was divorced, she didn’t live alone. So the two lived at the jail from the time Charles was five until 13. Among the stories he tells includes the day a prisoner broke out.

Another interviewee was Glenn Smith, who was born at the jail.

Rowlett said she has watched some of the testimonies already and was impressed.

“It looks very professional,” she said. “They’ve interviewed 10 people so far plus another five (to come).”

The goal is to create a film highlighting the jail’s history that will be shown before people go on the tour, she said. The Friends group also hopes to sell copies to help offset the costs of operating the facility.

Jameson is best known for authoring the “Beyond the Grave” series and has written more than 90 books, 320 songs and 1,500 articles.

Go to redtopjail.com for more information about the event and the history of the Red Top Jail.