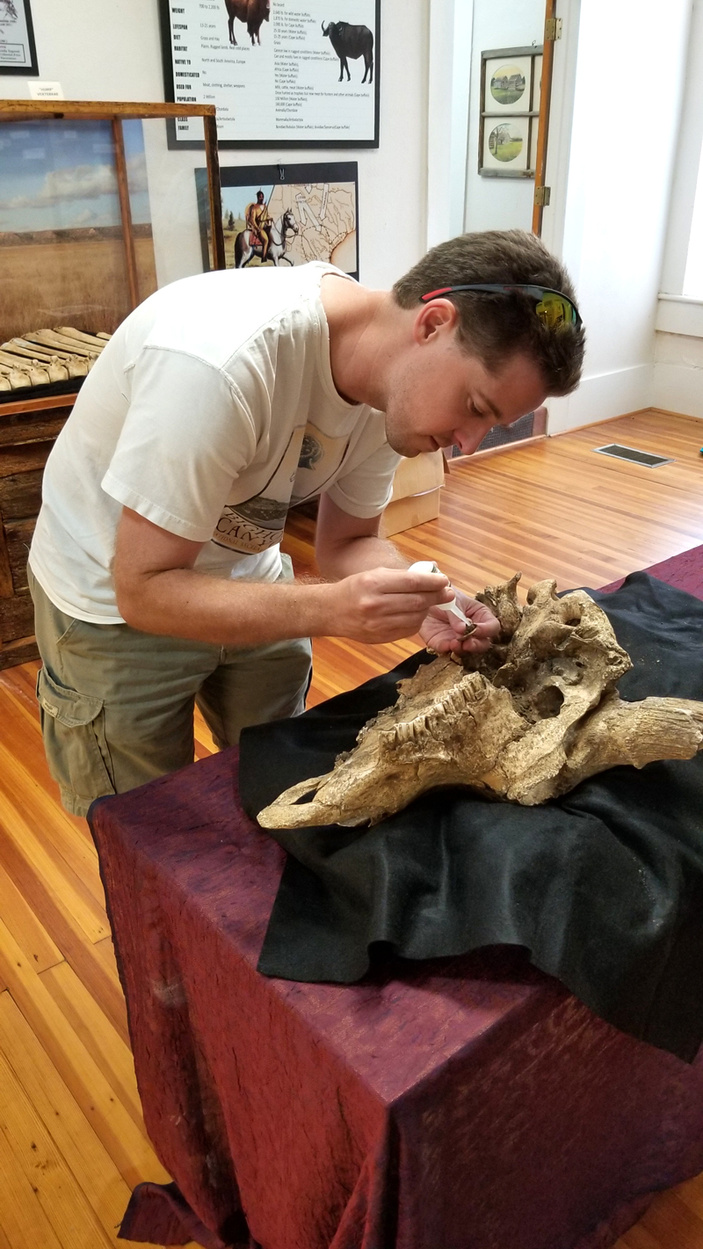 Ken Bader, fossil preparator from the University of Texas at Austin, cleans a small part of Rockie’s jaw at The Falls on the Colorado Museum, Rockie’s permanent home. The 700-year-old bison skeleton will be unveiled Oct. 13. Courtesy photo

What began as 11 boxes of bones and bone fragments is now 9 feet from nose to tail in a 10-foot-by-5-foot display case.

Rockie, the skeletal remains of a 700-year-old female bison, is complete and ready to be shown at The Falls on the Colorado Museum. An unveiling and exhibit begin at 10 a.m. Saturday, Oct. 13, at the museum, 2001 W. Broadway in Marble Falls. There is no cost to attend.

“The display is going to be up forever,” said Darlene Oostermeyer, board chairman of The Falls on the Colorado Museum. “We’re going to display her on the left side, much as she was found in the (Rocky Creek) bed. We thought this would be better long term.”

Several people who were instrumental in finding Rockie and putting her back together again will be presenters during the unveiling. In all, it shouldn’t last more than 75 minutes.

• Ryan Murray, who discovered Rockie in a bank on Rocky Creek and donated the skeleton to the museum, also giving the facility his notebooks filled with records, photos, maps, and other information;

• David Calame Sr., who, along with Murray, will talk about the excavations, their approaches in exposing and recording the bison, their theories of what caused Rockie's death around 1300 A.D., and review the radiocarbon dating and other special studies;

• Ken Bader of the Jackson School of Geosciences Vertebrate Paleontology Laboratory at the University of Texas at Austin, who’ll share how he coaxed Rockie’s bones back to life during the last year, preserving her for several decades;

• and Tom Hester, an archaeologist and museum board member, who’ll talk about how Rockie fits within the terrain of that time period and the Native Americans who hunted bison.

Murray donated the rare skull of the bison in June 2017. That officially launched a campaign to have her body completed and placed on full display.

“It’s our biggest achievement, no doubt about it,” Oostermeyer said. “We had to raise money, find someone to build the display, and put her back together. We started fundraising 15 months ago.”

While Oostermeyer stopped short of saying Rockie is the cornerstone of the permanent installments at the museum, she did say the bison was a prime exhibit. She noted the museum also has a natural history room with Native American artifacts and the Madolyn Frasier Room that houses Marble Falls school memorabilia. Both attract many visitors.

Still, she said, when children see Rockie for the first time, their eyes fill with wonder and they’re excited to point her out to their adult chaperones.

“It thrills me as a former teacher to see that kind of wonder,” she said.

Plush toy bisons will be sold for $20 each at the museum in honor of Rockie.