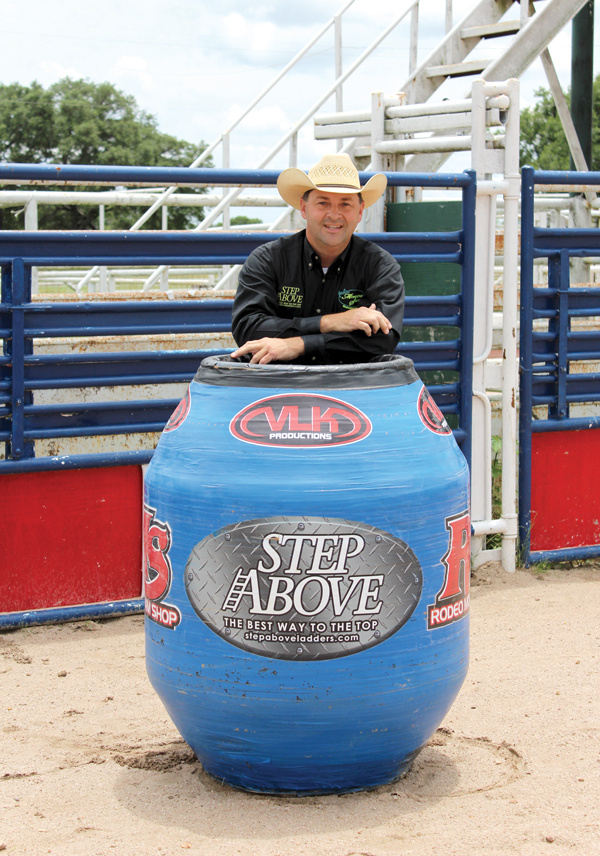 Rodeo clown Ronald Burton in his barrel, or the 'Island of Safety.' Staff photo by Jennifer Fierro

BURNET — Ronald Burton enjoys a view of rodeos that few spectators will ever see. Well, maybe “enjoy” isn’t the right word unless you love putting yourself between a fallen bull rider and an angry 2,000-pound beast fully bent on slamming you to the ground or tossing you into the air.

Especially when "safety" is a 3-foot-wide and 45-inch-tall barrel with a little bit of padding between you and the bull.

“We call it the 'Island of Safety,'” Burton said of the barrel. “It’s far enough away from the action in the arena but close enough for the bull riders to get to it.”

Burton, you see, is a rodeo clown and barrel man. He’s one of the men charged with protecting bull riders when they get tossed from a bull.

There’s an opening in the bottom with handles so Burton can pick up the 100-pound barrel and hurriedly get to the bull rider to take the impact of an angry bull.

But the best barrel men are also entertainers who can make a big difference in the overall rodeo production.

Burton has videos on his phone of some of his heroic feats.

In one video, he times his jump perfectly to leap over a bull just before the animal can get to him.

In another, he positions himself inside the barrel as a bull rider pushes it on its side to use it as a shield between himself and the bull.

And in another, the bull finds the opening of the barrel and rams his head inside, hitting Burton on the shoulder.

Burton, the star of the 2015 documentary “Man in the Can,” which has won awards at film festivals and been shown at the Pro Rodeo Hall of Fame and the Wrangler Rodeo Finals, understands why people might question his sanity for willingly putting himself in danger.

“It’s an adrenaline rush,” he said with a giant smile. “But I get it. I wouldn’t bungee jump or jump out of a plane.”

He said having the documentary shown at the Wrangler Rodeo Finals — the Super Bowl of rodeo — and the Pro Rodeo Hall of Fame were career highlights.

Burton toured the hall, which is filled with so many of his rodeo heroes.

“The guys who paved the way,” he said. “It was an honor for me to see that stuff.”

The Wrangler Rodeo Finals was an extraordinary sight for him. It’s a 10-night event that averages 18,000 spectators per evening with prize money in the millions.

“To have my film be a part of that was icing on the cake,” he said.

When he and Higa began filming, neither knew how the story would unfold; turns out, it became the story of a man pursuing his dream.

“It’s touched a wide variety of people,” he said. “The majority of people who watch the film said, ‘I want to go to a rodeo.’ The film is real. Noessa held so true to that.”

The film documents his family's struggles, his travels and the inner workings of being a rodeo clown.

“I’m a what-you-see-is-what-you-get kind of guy,” he said. “Noessa told me, ‘You don’t act any different when the camera is on or off.’ I wanted to present the tradition of the sport.”

Burton said he uses his career to inspire others, particularly children. He is a spokesman for anti-drug and anti-bullying campaigns and tells them he was able to make his dreams come true without using “any kind of drug.”

“It’s a love and a passion for it,” he said about his career. “When you love something this much, it’s not a job; it’s some sort of an ability to make people smile and laugh and entertain people.”

And he realized a long time ago that most spectators are blue-collar American families who are careful about how they spend their money. So he has a “clean” act and doesn’t tell jokes he wouldn’t say in front of his daughter.

“I’m going to do my best to make sure they get their money’s worth,” he said. “I want them to take their minds off their problems and give them a two-hour break.”