Age Is Only a Number, But Bench Press Weight is State Record for Russ Roberts 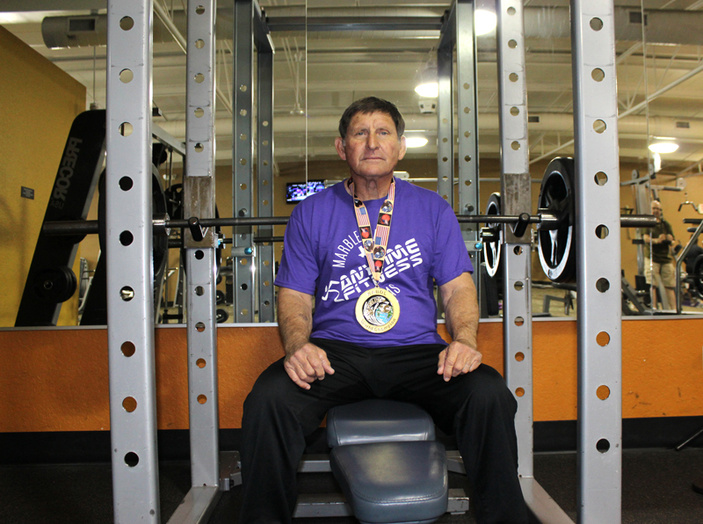 Russ Roberts, a longtime lifter set a new state bench press record for men ages 68-74 and weighing 181 pounds in the bench press for the World Association of Benchers and Deadlifters when he lifted 240 pounds at the national meet April 7 at the Nathaniel Center in Kingwood. Staff photo by Jennifer Fierro

Age Is Only a Number, But Bench Press Weight is State Record for Russ Roberts

KINGWOOD — Former Faith Academy of Marble Falls football coach Russ Roberts only stands 5 feet 5 inches, but when it comes to bench pressing, there’s no one in his age group who’s stronger.

Roberts, 69, is the new World Association of Benchers and Deadlifters state record holder in the bench press for men ages 68-74 weighing 181 pounds. He lifted 240 pounds at the national meet April 7 at Nathaniel Center in the Houston suburbs.

How did he do it?

“I didn’t out-lift people; I outlived them,” he said. “There was no one in my age group at the competition.”

He now holds two state records in two different age groups for 181-pound male athletes. The other is for a 369.2-pound bench press in the 61-67 age group.

Not bad for guy who said he never bench pressed 200 pounds as a teenager while attending San Antonio McCollum High School.

The coach broke the record for the 61-67 age group when he was 61 in 2010 before he retired from teaching in public schools. Two years ago, as he was getting ready to cross into another age group, he discovered the state record was 220 pounds.

“I thought, ‘I could break that. I could train and get back into a (bench press) shirt,’” he said.

Months prior to the recent competition, he called his old buddy, Tiny Meeker, a professional weightlifter and world bench record holder, and asked about upcoming meets.

Meeker told Roberts he was hosting one in April 2017, which would be his last in the state of Texas for awhile. Roberts signed up.

When the coach arrived at the meet, he thought he hadn’t lost enough weight to compete in the 181-pound division, but he weighed in at 179 pounds.

He credits three activities for helping him build self-esteem as a youngster: his faith, dating and marrying his wife, Tricia, and weightlifting.

When he first met his wife, she was taller than him, which led to some long stares from others.

“I decided I wanted to date her, and I didn’t care what people thought,” he said.

Several decades later, his faith has grown, he’s been married for 49 years, and there’s no one better in his age group at bench pressing.

Roberts began getting serious about weightlifting as a youngster at Terrell Wells Junior High. The starting quarterback saw Roberts and asked him what he was doing to get stronger. Roberts told him he was going to the weight room after school.

“Lifting weights was the first compliment I ever got as a kid from a teammate,” he said. “That little bit of inspiration, I’ve held onto it.”

He doesn’t deadlift because he didn’t do it when he was younger, and he doesn’t squat because he has bad knees.

“The deadlift is considered too close to a squat,” he said.

Back then, coaches followed the advice of the legendary Paul “Bear” Bryant, who said having agile and quick players was more important than strong ones, especially since coaches weren’t allowed to substitute as much as they do now.

“Don’t bulk them down with muscle,” Bryant would say.

“You go in and play and stay in the game, so you trained for conditioning and endurance,” Roberts said.

After he began coaching, one of the head coaches for whom he worked recommended returning to the weight room to bulk up.

“To be a football coach in Texas, you have to walk fast and talk loud,” Roberts recalled hearing. “It helps to be stronger than every kid in the weight room.”

“If a kid thinks he’s stout, but a coach walks in and bench presses 340, there’s a chance he’ll listen to you,” Roberts said.

As he got older, he lifted less, but he got back into competitive weightlifting when he became the head coach at Wharton High School in the early 2000s. Roberts opened the weight room to the community, noting it was purchased with taxpayer money. The only two rules were that residents had to follow the same guidelines as the student-athletes and weren’t allowed to lift if the players were in the weight room.

He also personally invited members of the Wharton Police Department to use the weight room, knowing their presence would help everyone stay on their best behavior. One officer wanted to compete in a state lifting competition for officers and needed a partner, so he asked Roberts.

“He talked me into it,” the coach said. “When I got started in competitive lifting, I was over 50.”

While Roberts has retired from coaching football, he hasn’t retired from athletics. He is the athletics director and physical education teacher at First Baptist School of Marble Falls.

Because of the physical and social benefits of lifting, Roberts hasn’t been shy about encouraging his players to hit the weight room.

“I push weights to any athlete for the same reason I did: confidence,” he said. “I want kids to feel better.”