Sabbaticals Are About ‘Ceasing,’ Says Marble Falls Pastor, Something We Don’t Do Enough Of 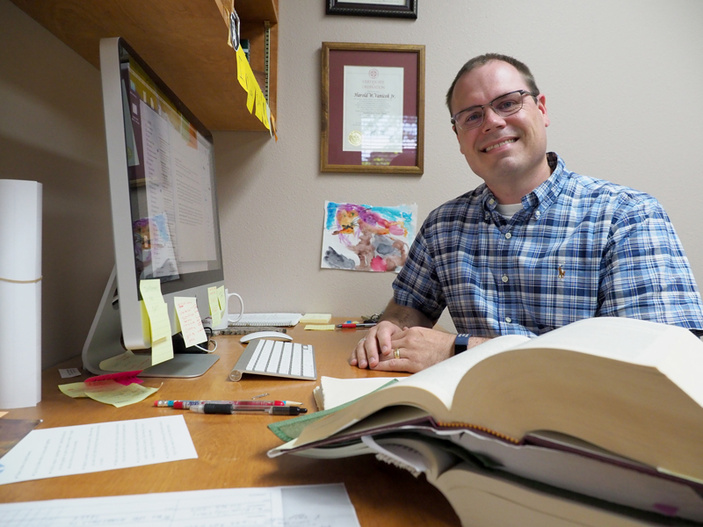 The Rev. Harold Vanicek of St. Peter’s Lutheran Church in Marble Falls will spend the next several months exploring the connection between God and science while on a sabbatical. The time away not only gives him a chance to dig deeper into his faith, it also provides a period of renewal, something good for him and the congregation. Staff photo by Daniel Clifton

Sabbaticals Are About ‘Ceasing,’ Says Marble Falls Pastor, Something We Don’t Do Enough Of

MARBLE FALLS — As the Rev. Harold Vanicek of St. Peter’s Lutheran Church works his last few days before his sabbatical, he knows people have questions about his next three months.

“Usually, the first question is, ‘Why are you taking a sabbatical?’” he said.

Which is often followed by, “What is a sabbatical?”

The two questions complement each other, and Vanicek explains the importance of sabbaticals to the curious.

Vanicek begins his sabbatical May 27 and returns to the church Aug. 27. He has lined up several trips and activities for the purpose of becoming “more aware of God in different ways.” While he’s away, all the work isn’t falling on the shoulders of senior pastor Danielle Moore Casey. The church will host guest preachers as well as a summer sabbatical speaker series, which will feature a preacher, a rabbi, and an astronaut. (Vanicek acknowledged that sounds like the intro to a joke).

“For the congregation, the word is ‘renewal,’” said Trey Brown, who is a member of St. Peter’s as well as Vanicek’s sabbatical team. “Our congregation is enhanced when a pastor is renewed, and we’ll have a chance to experience a little bit of what he’s experiencing through the speaker series.”

Sabbaticals, once reserved for clergy and educators, are gaining traction elsewhere. They are basically extended breaks or leaves from work, often at least a month long.

Sabbaticals have a Biblical connection. In Leviticus 25, the Lord tells Moses that the people may work the land he is giving them for six years, but during the seventh, they must rest it. Throughout the Bible, there are references to “resting,” something with which, Vanicek noted, Western cultures struggle, almost to the point where rest is considered a sign of weakness or something negative.

“We have trouble with the idea, or concept, of ceasing,” the pastor noted. “I feel like, in our American culture, value is put on work, not on renewal or rest.”

But time away from work has benefits for both employee and employer. According to a 2017 Society for Human Resource Management survey, the number of companies offering paid and/or unpaid sabbaticals has risen by 17 percent.

Research shows these extended vacations help businesses and organizations in many ways, such as allowing others to take on leadership roles while someone is on a sabbatical as well as increasing the well-being and productivity of the person taking time off when they return to work.

Offering sabbaticals, however, comes with certain challenges, including cost. Some organizations continue to pay the person on sabbatical and also have to cover expenses for additional staffing.

St. Peter’s will cover Vanicek’s salary and benefits while he’s away, but the Lilly Endowment Clergy Renewal Programs administered by Christian Theological Seminary of Indiana awarded the congregation a grant to fund his sabbatical expenses as well as the church’s guest speakers while he is away.

So what will Vanicek do during his three-month sabbatical?

Travel is part of the plan, but it will be directed travel. Sabbaticals are often done one of two ways: a complete rest or a planned study or project. On his journey, Vanicek will dig deeper into the relationship between God and science. His sabbatical’s theme is “Wonder.”

Prior to the seminary, Vanicek earned a degree in engineering, and science has always been an important part of his life. While others often view faith and science as incompatible, Vanicek sees a connection.

On his sabbatical, he and his family will tour several scientific and natural history spots in the Southwestern United States, including a couple of observatories, Carlsbad Cavern in New Mexico, Very Large Array (that’s the name) in Socorro, New Mexico, a petrified forest, a meteor crater, and the Grand Canyon. He’ll also spend time in contemplation, including during a five-day silent retreat.

Vanicek heads to Chicago in July on a visit to Grace Wolf-Chase, the director of the University of Chicago planetarium, followed by Europe for several weeks with stops at the Ecumenical Iona Community in Scotland, then the Large Hadron Collider in Switzerland, and last a visit with Brother Guy Consolmagno, the director of the Vatican Observatory.

“I’ve really never let those two sides of me — faith and science — play together,” Vanicek added. “Now, here’s a chance to have fun with God.”

He’ll spend the last two weeks of his sabbatical at home with his family, reflecting on his journeys.

With what he’s learned, Vanicek hopes he can help the St. Peter’s congregation grow bolder in its faith and ask those tough questions of God.

“The series and guest ministers offer us a chance to learn the Word from different voices,” Brown pointed out. “Hearing the Word from others, I think it unites you in your faith and expands your faith because you do experience God’s teachings from other people. We get really myopic that we’re a Lutheran congregation in Marble Falls, but when you bring in people like the (University of Texas) campus pastor and the (theological) seminarian, then it unites us as believers, and that’s uplifting.”

“It definitely opens up that the church isn’t just the local church, it’s worldwide,” he said. “It’s universal.”

“I know people might think it’s just a vacation or time off, but it’s much deeper than that. If you think about it, when a pastor is here, they are on call twenty-four hours a day,” Brown said. “They don’t get time off, and even when they’re on vacation, it’s not like they’re really off because, you know, people will call them or something. They need this time, not just as a break, but as a time to dig deeper into their own faith and spiritual needs.”

Vanicek understands he is fortunate to have a congregation that’s supportive of him taking a sabbatical. However, he said, a person can also benefit from mini-sabbaticals, something as simple as disconnecting from the digital world for a weekend each month or setting aside time to explore their faith in a more experiential manner.

“We all need some time to just cease and be more aware of God in different ways,” he said.