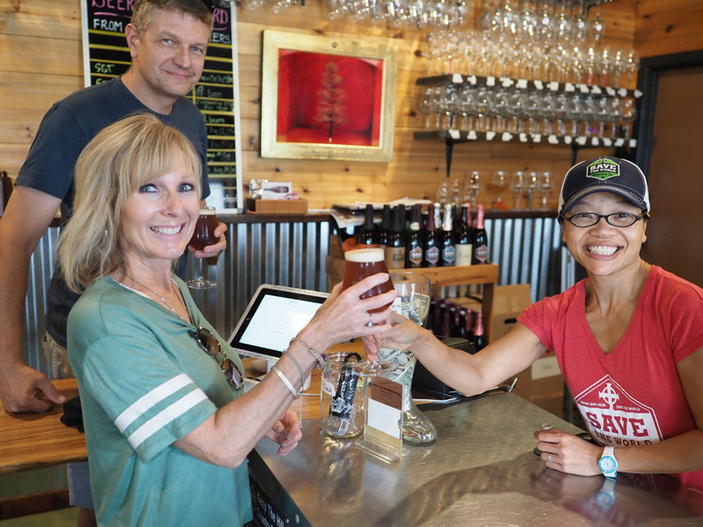 Quynh Rathkamp (right) serves a Save the World Brewing Co. craft beer to Dawn and Mark Redlin during the couple’s recent stop at the Marble Falls brewery. Save the World is celebrating its fourth anniversary from 1-6 p.m. Saturday, Oct. 6, at 1510 Resource Parkway in Marble Falls. Tickets are available at mkt.com/savetheworldbrewing. Staff photo by Daniel Clifton

Quynh and Dave Rathkamp of Save the World Brewing Co. could list all the awards their beers have racked up the past four years. They could talk about the joys of crafting unique beers, some so special they only make a 10-gallon batch.

They could go on about the pride — and sometimes headaches — in starting and growing a small business. They could brag about the $100,000 that Save the World has donated to several charities over the past four years.

All those would be true.

But, as the couple sat on the patio outside the brewery’s tasting room, they shared another part of Save the World that’s special to them.

Dave’s gaze went out to the picnic tables, the tether ball game, the playscape. Though nobody was enjoying those things at that moment, he could see them in his mind from days past and those yet to come.

Over the past several years, as residents and visitors discovered Save the World Brewing Co., it has become more than a brewery. It’s a place folks gather, often making connections and building friendships.

“I’ve seen so many people come out here, meet new people, and become friends, good friends,” Quynh said. “One thing that’s been special year after year, we’ve got to know so many people. Some of these become True Beerlievers, but they become more than that. They become our friends and family.”

True Beerlievers is what the Rathkamps call loyal customers. But, as people came into the tasting room, it’s clear the couple don’t see them as customers but part of the Save the World family.

Save the World Brewing Co. and the Rathkamps are holding a four-year anniversary celebration 1-6 p.m. Saturday, Oct. 6, at the brewery, 1510 Resource Parkway in Marble Falls. General admission tickets are $17 and include a souvenir glass, which earns a $3 discount on beers in the tasting room, any three beers to be enjoyed at the event, and a chance to explore the brewery. There’s also a $10 ticket for True Beerlievers, which includes an hour’s early access to the party.

There will also be food available from a brick oven pizza and Thai Gourmet. 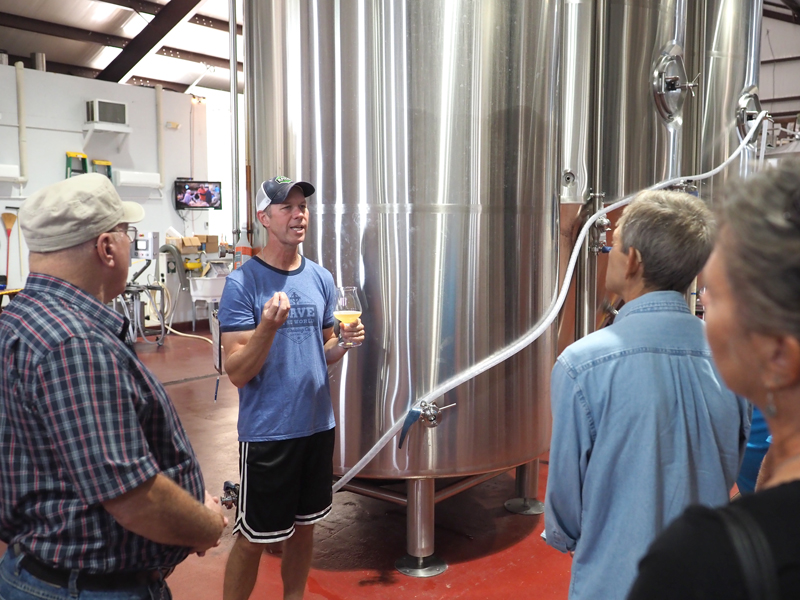 Dave Rathkamp, who started Save the World Brewing Co. with is wife, Qyunh,gives a tour of the brewery. Staff photo by Daniel Clifton

Up front, you need to know this isn’t a typical craft brewery. Yes, the centerpiece of the business are the beers that Dave is constantly developing and tweaking. When the Rathkamps, who both come from medical backgrounds, built Save the World, they created it as a 100-percent philanthropic brewery. After the bills are paid, the profits go to charity. Their three main charities are Highland Lakes Habitat for Humanity, Meals on Wheels, and Food for the Hungry.

Dave and Quynh help more than those three, though. In August, Save the World — in collaboration with Banger’s of Austin and The Hoppy Monk of San Antonio — released Flamma Granatum. The Rathkamps dedicated all the proceeds from the beer and its release party to local fire departments.

“The summer was pretty hard on our fire departments, and they worked so hard,” Quynh said. “This is one way we could help them out.”

You can enjoy Save the World beers at the brewery, which is open 4-5 p.m. Mondays and Tuesdays, 4-7 p.m. Thursdays, 3-7 p.m. Fridays, and 1-6 p.m. Saturdays, or purchase them in a number of stores or restaurants in Central Texas.

All 23 beers will be available during the anniversary party, including several that can only be purchased at the brewery.

Dave is the creative genius behind the beers. He demurred a bit as Quynh described him as such, but she was adamant. Dave, in turn, said the brewery wouldn’t run well, if at all, if not for Quynh’s work, especially on the business side. Despite their success both in business and beer competitions, the Rathkamps maintain a sense of humility and a mission of service to others.

And their beers are among the best in the country and even the world.

“When you can win in a Belgium category against Belgium breweries, that’s amazing,” Quynh said.

The medals and festival acknowledgements are great, but the Rathkamps don’t rest on that success.

Dave knows he can do better and improve on the beers.

“If you’re not expanding, if you’re not getting better, then you’re retreating,” he said. 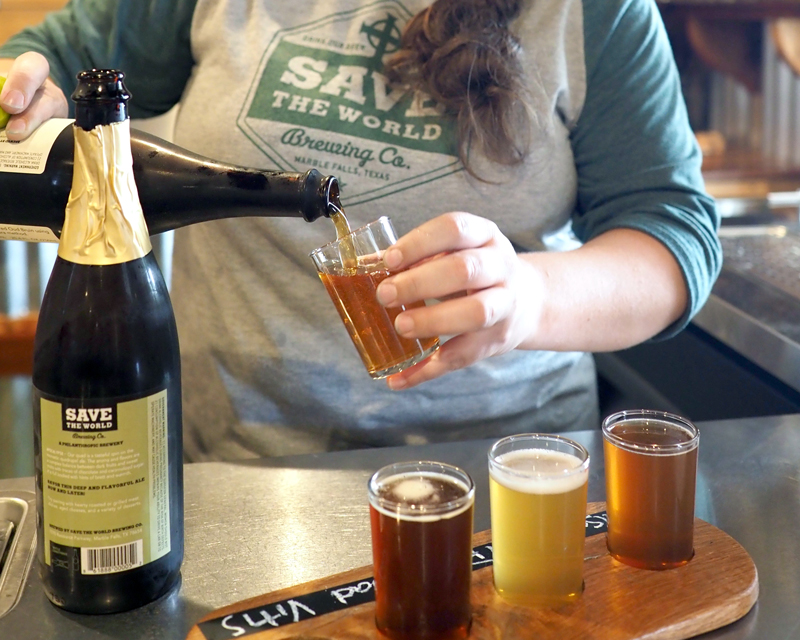 Save the World Brewing Co. is known for its Belgian ales. The brewery has won a number of awards at regional, national, and international beer festivals. Staff photo by Daniel Clifton

Save the World recently released Jonah’s Relief Imperial Pumpkin Ale for the fall season. Dave didn’t simply add a few spices to a current beer and call it pumpkin ale. No, he built the beer from the grains up.

This way of making beers can work against Save the World at competitions because some of their styles don’t quite fit the judging guidelines for Belgian divisions.

“I want something people like and enjoy,” he said. “Something they’ll come back to.”

Along with creating the beers, Dave works hard to maintain the quality of each style and flavor. Save the World has a full laboratory where Dave can test and monitor all aspects of the beers. Plus, they purchase only the highest quality of ingredients, all non-GMO. It’s more expensive, the Rathkamps admitted, but the final product is worth it.

The plan seems to be working as more and more people discover Save the World beers, both at the brewery and in stores and restaurants. Those new fans often introduce others to the Rathkamps and their crew, whether through the beers or stopping by the brewery.

“That’s one of the greatest compliments, when someone brings their friends and family here,” Dave added.And then, they’re part of Save the World’s family.

Go to savetheworldbrewing.com for more information about the brewery and tasting room hours or call (830) 637-7654. 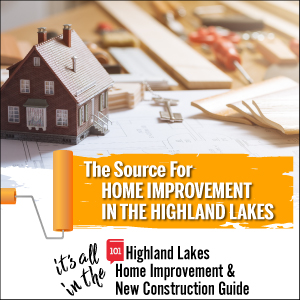