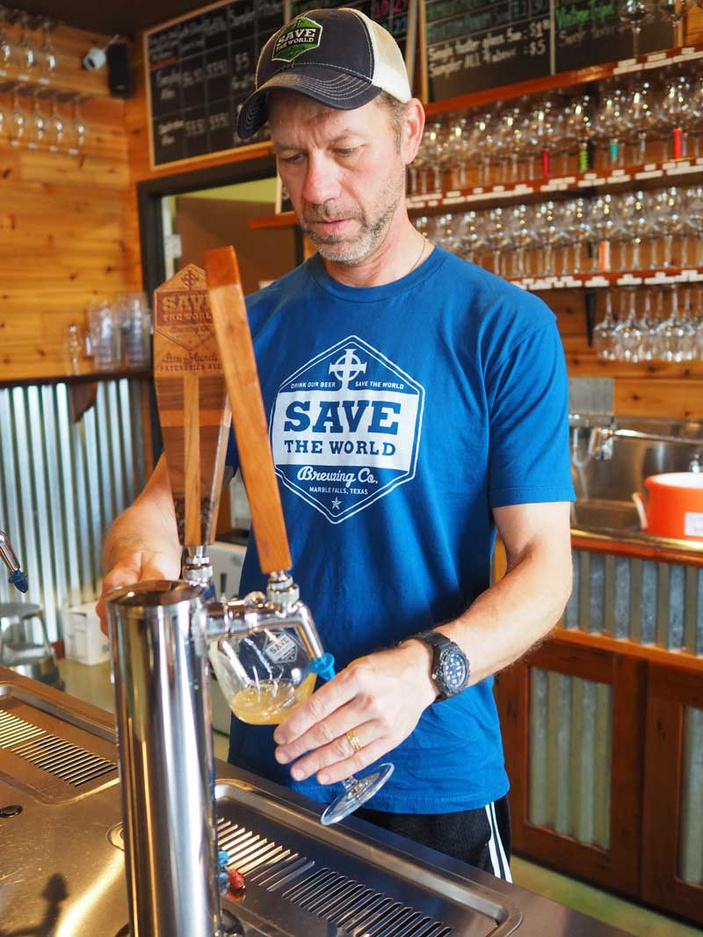 Dave Rathkamp pours a glass of Save the World Brewing Co. beer. He and his wife, Quynh, opened the philanthropic craft microbrewery three years ago. They are holding a third anniversary celebration on Saturday, Oct. 7, which will also serve as a fundraiser for Hurricane Harvey relief efforts. The event, which features food and more, is 1-6 p.m. at the brewery, 1510 Resource Parkway in Marble Falls. Staff photo by Daniel Clifton

MARBLE FALLS — As the third anniversary of Save the World Brewing Co. approached, the city of Houston and Southeast Texas was hit hard by Hurricane Harvey on Aug. 25.

Gov. Greg Abbott estimated damages from the catastrophic storm could cost as much as $180 billion.

The plight of Harvey’s victims weighed on Dave and Quynh Rathkamp, who are committed to making Save the World a philanthropic microbrewery, donating money to charities around the world.

They decided that proceeds from this year’s anniversary party will go to Hurricane Harvey relief efforts. The event is 1-6 p.m. Saturday, Oct. 7, at the brewery, 1510 Resource Parkway in Marble Falls.

“The anniversary party was always going to happen before the hurricane occurred,” Quynh Rathkamp said. “We saw how much need there was. We need to continue to put a big emphasis, we need to contribute. That wasn’t necessarily in response to the (hurricane relief). We would have emphasized some charity.”

True Beerlievers, the brewery’s beer club members, can get an early taste at 12:30 p.m., while the general public is welcome from 1-6 p.m. The True Beerliever club, which began in 2015, has close to 600 members.

“They are absolutely our most ardent supporters and advocates,” Rathkamp said.

Tasting room specialties include two firkins of one-year aged imperial pumpkin beer and one aged on rum-soaked toasted coconut, pecan, and Hungarian oak. The other imperial pumpkin has been aging on whiskey-soaked dates and Hungarian oak. The final tasting room-only special beer is a 2½-year-old Oud Bruin, a sour ale aged in the traditional method.

Hatfield’s BBQ of Horseshoe Bay will have food for sale.

“Variety is the spark of life,” Rathkamp said. “Dave, our brewmaster, wants to exercise his artistic creativity. We love introducing people to new styles and especially what we’re able to do.”

The brewery will do a raffle as part of the fundraising for Hurricane Harvey relief with winners announced at 2 p.m., 3 p.m., 4 p.m., and 5 p.m. Tickets are $1 each.

Rathkamp said the brewery has been collecting funds throughout September for Harvey relief.

“So many organizations and individuals have done efforts to raise funds,” she said. “I really want us and our community to help.

“It’s easy to help in the beginning or shortly after,” she added. “As weeks go by, things start to (quiet) down, but those businesses and families can’t get back to their lives without assistance.”