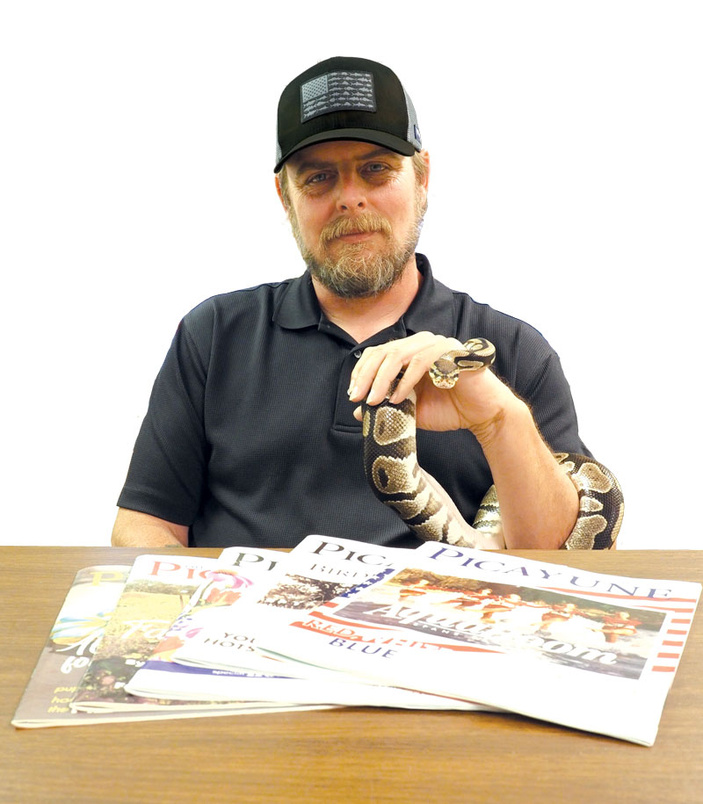 No, it’s not Take Your Snake to Work Day at The Picayune Magazine. Naunet, a 5-foot-long ball snake recently visited art director David Bean at the office just for this photo. Staff photos by Daniel Clifton

Ophidiophobia — the fear of snakes — does not afflict Victory Media art director David Bean. As a young adult in Longview, he kept more than 40 snakes and lizards in his apartment and regularly wrangled reptiles from the wild to sell in pet stores.

“I wanted a pet, so I went to the pet store and bought a bull snake,” Bean said of his life immediately after high school.

A full-time employee at Zimmerman Sign Company, he picked up a part-time job at Pet Palace. Instead of a check, take-home pay came in the form of snakes, lizards, and the small prey needed to feed them, mostly mice and crickets.

Bean caught wild snakes to build his collection. He even sold captured non-venomous snakes for extra money: $10 for a rat snake; $25 for a corn snake.

“I used to use a technique, kind of like a snake charmer,” he said. “You know how the snake charmer plays music and moves back and forth really slowly? A lot of people think it’s the noise that charms the snake. It’s not. It’s the movement.”

Waving his left hand slowly in front of the snake’s face, Bean would wait until head and hand were in sync then reach behind with his other hand to grab the snake by the back of its head.

“I don’t remember how I learned to do that,” he said. “I guess I figured it out over time. I was tired of getting bit by snakes.” 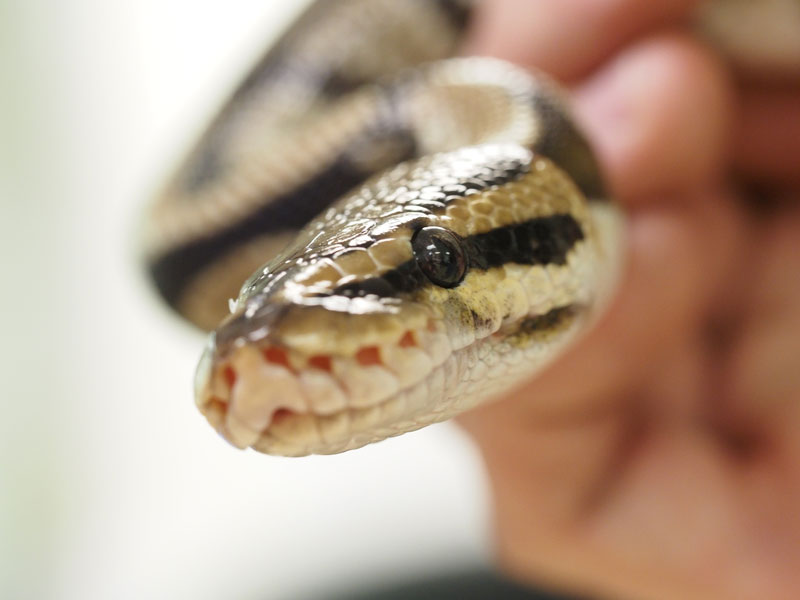 Naunet was named for an Egyptian snake goddess.

Bean learned that non-venomous snakes have fine, needle-like teeth that stick in your flesh if you yank the snake away. That instinctive jerk harms both snake and handler and can lead to infection.

“You have to let them chew on you until they’re done,” Bean said. “Then, it just leaves these little needly dots in the shape of a snake’s mouth on you. It hurts, but it’s no big deal.”

No big deal, that is, unless you are a first- or second-grader watching as a large Honduran milk snake attacks its handler giving a class demonstration.

“My boss insisted I take him,” Bean said of the milk snake. “I warned him that the snake wasn’t tame enough, but he was really colorful, and my boss said the kids would love him.”

Love him they did — until blood started running down Bean’s arm from five different bites.

“Honduran milk snakes don’t have fangs, but they have big teeth,” he said. “I was bleeding like crazy, and these first- and second-graders were freaking out. I was there trying to teach them that snakes are tame and won’t hurt you. I never got invited back.” 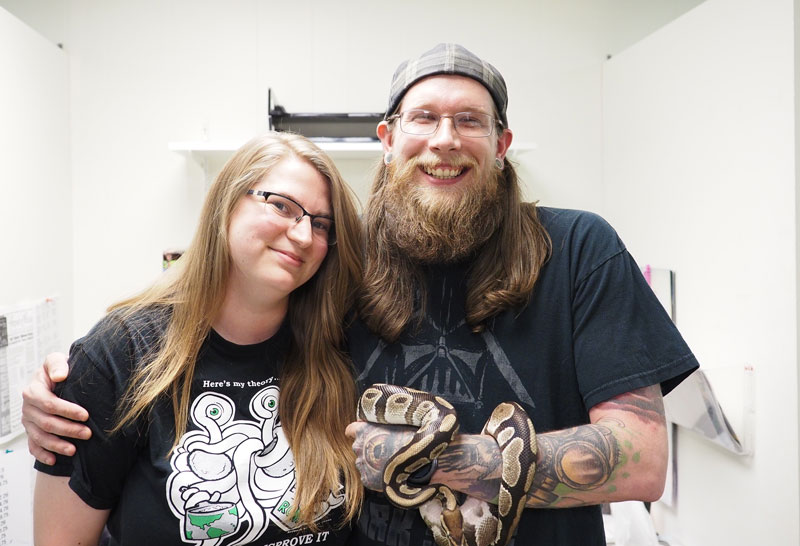 A worse encounter with a snake happened at the pet store one day after everyone else had gone home. Bean was feeding rabbits to three pythons measuring 13, 17, and 18 feet.

All were in the same cage but had to be fed one at a time. Bean would take one out and let it loose on the floor with its food. When he got to the 18-footer, he realized it was molting — shedding its outer layer of skin.

“When they’re molting, their eyes haze over and they can’t really see all that well,” he said. “They can only smell.”

What this semi-blind python smelled when released was a young man who had been handling dinner. The python rose up about 5 feet off the floor to strike at what he thought was an extra-big meal. Bean grabbed him by the head to keep from getting bit. That’s when the snake started wrapping itself around his feet and legs.

“That was the first time I was ever really scared,” Bean said. “I realized this snake was a lot stronger than I was — this snake could kill me. There was no one else in the store. It was just me.”

Bean managed to escape by sliding out of his shoes and socks and wrestling the snake back into its cage.

This particular python had to finish shedding before anyone tried to feed him again.

Bean got out of the snake business when his landlord discovered his home herpetarium. He ended up selling most of the reptiles at the pet store.

Now, 26 years later, Bean is open to bringing another snake into the house when his 8-year-old son gets a little older. He plans to teach Bruce how to handle snakes, whether or not they ever keep one as a pet. Wife Ana has no objections. She’s been his accomplice since the beginning, when aquariums and cages lined the walls of their first marital home.

“It didn’t seem to be super unusual at the time,” Ana Bean said. “Though, now, it seems kind of crazy.”