What's that smell? Skunks of the Texas Hill Country 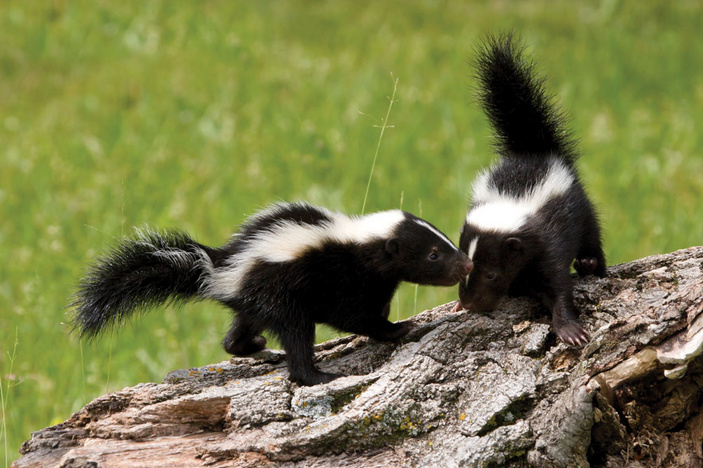 The striped skunk is the most common in North America, including Texas, which is home to five of the 12 different types of mephitidae, the animal’s scientific name. In Texas, we call 'em polecats. iStock image

What's that smell? Skunks of the Texas Hill Country

You don’t need a sensitive sniffer to know love is in the air when it comes to spring in the Highland Lakes. From February through April, skunks roam the night in search of mates — an activity that often leads to stinky situations. Whether released by threat of predator or impact of vehicle on the road, eau de skunk perfumes the night air during skunk mating season.

The smell emits from two grape-size musk glands filled with about a tablespoon of an oily, yellow substance containing thiols, sulfur-based organic compounds. Each gland can be aimed and sprayed independently. In addition to the horrendous odor, the spray can cause a burning sensation, inflammation, and even temporary blindness.

Skunks can spray more than once in the same time period. They tend to spray sparingly; a little goes a very long way. If you encounter a skunk, leave it alone, stand still, and then slip away.

Texas is home to five species of skunks, but only four of those are found in the central Hill Country. The most common is the striped skunk, "affectionately" called a polecat (which is actually a different animal altogether). It has a narrow white stripe that runs from nose to forehead and a thick white stripe that starts atop the head, splits at the neck, and runs down each side of the body. The amount of white on the tail varies.

The hog-nosed skunk, or rooter skunk, is also common. It is easily identified by the long hairless nose pad with which it roots around in search of food. Hog-nosed skunks have one broad white stripe that runs from the top of the head to the base of the tail, which is usually all white. They have long claws and strong front legs for digging.

You can also find Eastern and Western spotted skunks in Central Texas.

All skunks are omnivores. Their diet consists mainly of grubs, insects, rodents, reptiles, larvae, plants, and occasionally birds and eggs, making them handy to have around for natural pest control. Being nocturnal, they head out at dusk in search of a meal and are generally active overnight, although it is not uncommon to find one out during the day in mid-winter or early spring looking for a snack.

These gentle, passive creatures have developed quite a foul reputation. Although they are not aggressive or territorial, they are known to skirmish over food, den sites, or mates. They have few natural predators due to their built-in defense system. The great horned owl is one predator that is not deterred as it has a poor sense of smell. Skunks are not threatened by human presence and will peacefully go about their business when given space.

When feeling threatened, however, skunks use a variety of antics to warn encroachers to move away before getting sprayed. They stamp their feet, growl, arch their back, raise their tail and take aim, or even do a handstand with their rear-end up and aimed at the source of irritation. Heed the warning and you’ll be saved a spray.

You can also combine 1 quart of 3 percent hydrogen peroxide with ¼ cup of baking soda and 1 teaspoon of liquid dishwashing soap in an open container. This mixture can be used on people and pets. Allow the mixture to sit in the hair/fur for five minutes before rinsing. Repeat if necessary but use it immediately. This concoction can become explosive if covered or stored. Before disposing of any leftover mixture, dilute it heavily with water prior to pouring it down the drain.

Clothes washed with either of these mixtures should be air dried rather than put in a dryer.

This might surprise you, but tomato juice is not recommended. It masks the smell but does not eliminate it.