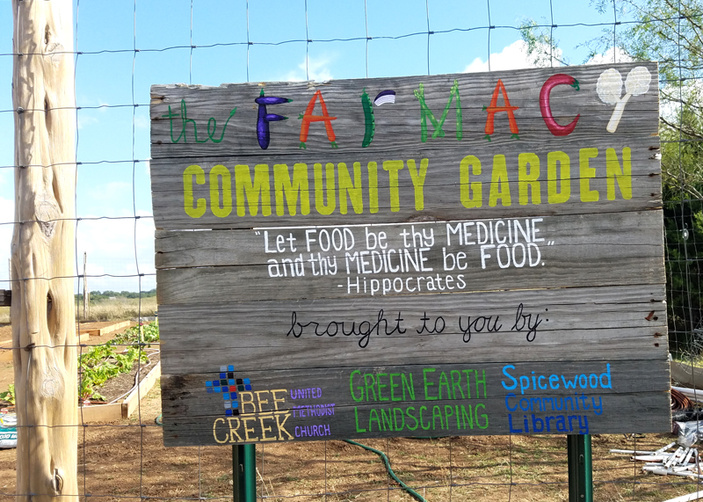 Hippocrates, considered the ‘Father of Medicine’ said: ‘Let food be thy medicine and they medicine be food.’ Spicewood Community Garden volunteers want to bring those words to life. Courtesy photo

SPICEWOOD — Candice Escobedo’s heart broke when she saw a patient of hers take a can of beans.

The patient has cancer, and Escobedo, a nurse who works for Methodist Healthcare Ministries and offices out of Bee Creek United Methodist Church, knew that canned food wasn’t going to give the man the nutrients he needed.

“I could see, already, the need,” she said. “I wished there was fresh food.”

That was early last fall.

Since then, Escobedo has organized the Methodist Healthcare Ministry team, and in October, that team started the Farmacy Community Garden, located behind the Spicewood Community Library, 1011 Spur 191.

It has one important goal: Ensure people get nutritious foods, even if they can’t afford it.

The garden’s mission is summed up in a statement by Hippocrates of Kos, a Greek physician (460-370 BC) who was considered the “Father of Medicine:"

Before Escobedo could start feeding the community, she first had to find a place to plant a garden.

During a visit with Allyson Black, an elementary school nurse, Escobedo discussed her desire to plant a community garden. The timing couldn’t have been more perfect. Black had received an email that morning from the Spicewood Community Library asking people to help restart the community garden that had existed from 2008-11. Drought had devastated the area, and without volunteers to care for the garden, weeds and other invasive vegetation overran the space.

Soon after speaking with Black, Escobedo met with library staff and was given full rein to plant, recruit volunteers, and anything else to re-establish the garden.

Then, she found the next key element: Master Gardener Clara Kistner, who grew up on a dairy farm and knew the ins and outs of gardening.

Kistner learned how to garden from her parents, including the process of canning foods.

“The only thing we bought was condiments,” Kistner said. “Everything was fresh.” 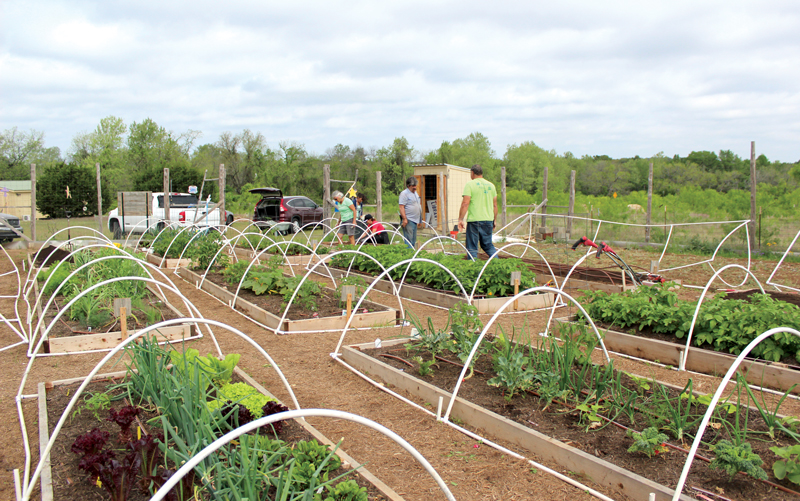 Volunteers have turned the old garden behind the Spicewood Community Library, 1011 Spur 191, back into a thriving green space with vegetables on the way. Organizers will give the produce to Spicewood residents who need a little help. Courtesy photo

The garden is a holistic approach to helping people understand that eating fresh food can help prevent diseases and lower common ailments such as high blood pressure and high blood sugar, Kistner said.

“But some people can’t afford to (buy organic foods) or get fresh vegetables,” Kistner said.

One big work day was organized in the fall during which volunteers removed weeds, built raised beds, worked on the drip-irrigation system, constructed frames, and addressed other needs.

Volunteer and Master Gardener Ricky Lane is fixing the irrigation system that took a beating because it hadn’t been used in several years. Some of the volunteers included the Bee Creek United Methodist Church staff and the church’s youth group.

“There are no chemicals,” Kistner said. “We do use an organic fertilizer. Most of the (nonorganic) fertilizers and pest controls are causing a lot of the chronic conditions.”

Eating nutritious food, along with an exercise program, can help fix health issues such as slightly elevated blood pressure.

“We want to bring (health) education back and provide fresh food ... ,” Escobedo said.

The group harvests the garden weekly. Kistner then washes and bags the vegetables to take to Helping Hand Crisis Ministry, 512 Pace Bend Road, every Tuesday. Individuals in need receive the free bags of produce, which can feed a family. The last harvest yielded 53 bags of vegetables, including chard, spinach, parsley, oregano, radishes, onions, and several types of lettuce.

Also included are recipes specifically for the vegetables in each bag, Kistner said.

“There’s never anything left,” Escobedo said. “Just because people can’t afford it doesn’t mean they don’t deserve it. What better ministry is there than to feed the community?”

The ministries nurse noted that Lane tried to restart the community garden about three years ago but couldn’t get enough interest. That’s why she believes the timing to do it now is perfect.

“We’re all vessels,” Escobedo said. “It’s so easy how we met. Everything fell into place nicely.”

Kistner said the group wants to work with schools to teach children the value of eating fresh foods and is partnering with a nutritionist to provide healthy eating classes.

The garden still needs donations and volunteers. Workdays are Mondays and Thursdays starting at 9 a.m., but that might increase because of the types of foods being harvested that require daily removal. Email Kistner at clarakistner@hotmail.com for more information.

“We think it’s great,” she said. “We get so much out of it. We’d like to teach people and get more involvement and get more sponsorship and help.”