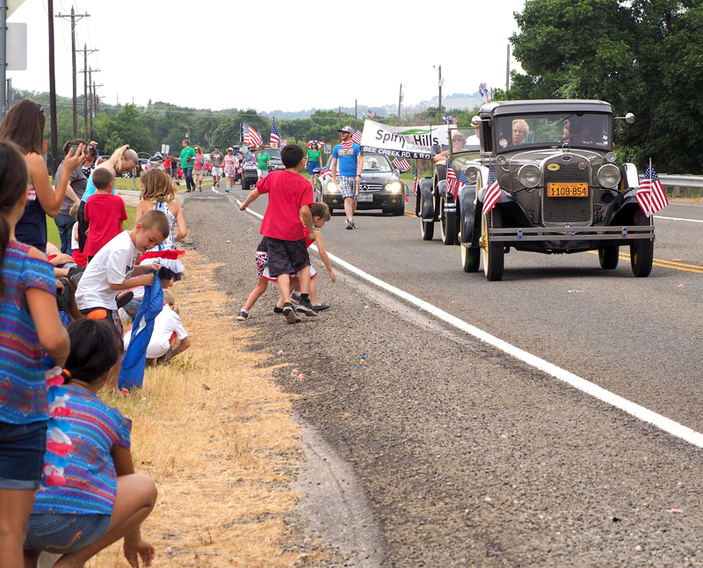 Who doesn’t love a parade? And if you’re looking for a fun, small-town atmosphere, check out the Spicewood Fourth of July Parade sponsored by the Spicewood and Highland Lakes Lions Club. The parade starts rolling at 9 a.m. July 4 from the Spicewood post office, 121 Spur 191. Staff photo by Daniel Clifton

SPICEWOOD — As Barbara Tweed looked through photos from a past Fourth of July parade in Spicewood, she laughed at several that caught her attention.

“We had these two little women walking arm in arm, probably best of friends, all dressed in red, white, and blue waving at people,” Tweed said. “Then, there’s the goat.”

“It’s a good old-fashioned parade,” Tweed added. “That’s why I think people love it. It’s why I do. You can almost just show up and be in it.”

If you don’t want to be in the community’s Fourth of July parade, which is sponsored by the Spicewood and Highland Lakes Lions Club, you can just find a spot along the route and enjoy it.

Tweed, a member of the Lions Club, said the organization started the parade several years ago because Spicewood didn’t have one. The parade reflects the local community: a bit laid-back and informal.

The parade, which includes a picnic afterwards, gets rolling at 9 a.m. from the Spicewood post office, 121 Spur 191, and heads down the road before eventually ending up at Spicewood Community Center, 7901 CR 404. At the center, folks can enjoy hot dogs, sodas, and a few other things.

“Every year, someone always shows up with watermelon,” Tweed added.

The parade features a mix of floats and walkers. People sometimes walk with their kids — both that goat and the human kind.

“It’s a very animal-friendly parade,” Tweed said. “It’s dog-friendly, goat-friendly. We’ve had people bring a longhorn. And, we have horses.”

Of course, there are entrants riding bikes, cruising along on old (and new) tractors, riding ATVs, or taking it all in from a convertible. If you have a golf cart, decorate it in red, white, and blue and bring it out.

“We even have a guy that follows along in his wheelchair, so come on out,” Tweed said.