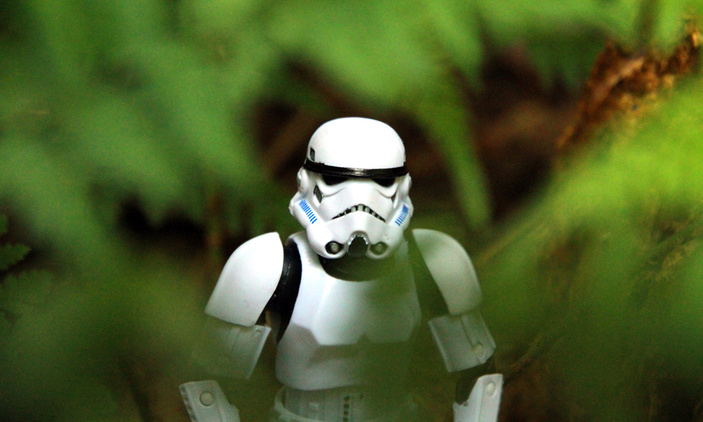 Inks Lake State Park storms into Star Wars Month in May with a Wookiee-size schedule of events.

HOOVER’S VALLEY — Not so distant in the future in a state park not far, far away …

“May is Star Wars Month,” said Linsday Pannell of Inks Lake State Park. “You know, May 4 is ‘May the Fourth Be With You’ and May 5 is ‘Revenge of the Fifth,’ so I kind of made May a month of Star Wars events.”

How do you take a sci-fi series set in outer space and tie it into activities at a state park in the middle of Texas? If you’re as big of a “Star Wars” fan as Pannell is, you just, well, use the Force.

Actually, Pannell took well-known “Star Wars” series movie lines, characters, and settings and twisted them into puns for program names and came up with some unique events to go with those names. The first “Star Wars” celebratory event is “May the Forest Be with You” at 7 p.m. Friday, May 4.

That’s followed by “Revenge of the Silt … Lords” at 10 a.m. Saturday, May 5. And, if you’ve ever wondered if Chewbacca could fish, you’ll want to attend “Fishing with Wookiees” at 3 p.m. later that day. But as much as Pannell tried to convince volunteer and Master Naturalist Phil Wyde to don a Wookiee costume for the event, he just wasn’t going for it.

Wyde, however, has more of a Obi-Wan presence than a Chewie one, so the fishing program for beginners will be led by a “Jedi Master Naturalist,” according to Pannell.

With the exception of “Fishing with Wookiee” (which is normally called “Fishing with Rangers”), the “Darth Baker” (dutch oven) cooking demo Saturday, May 19, and “Defeat the Empire” (atlatl instruction) on Saturday, May 26, the rest of the activities are new.

If you’re ready for an adventure, here’s a breakdown of Inks Lake events in May.

It all starts at 7 p.m. Friday with “May the Forest Be With You” at the Pecan Flats Trailhead across from park headquarters.

“We’re trying to emphasize stewardship and how the trees are important to us,” Pannell said. “During it, you become Jedi stewards of the Texian Galaxy. I’ll also have certificates so people can adopt a tree.”

Folks get to pick their tree, and, Pannell pointed out, it doesn’t have to be a living one because dead trees play important roles, too.

During “Revenge of the Silt … Lords” on Saturday, the park will shift attention away from the more popular flora and fauna to the unsung heroes of the ecosystem such as earthworms, mussels, and algae.

“Mammals and flowers get a lot of the attention, so we’re going to look at some of the things that don’t,” she said.

“Fishing with Wookiees,” under the tutelage of the Jedi Master Naturalist, is a chance for people of all ages to learn to fish. Along with the May 5 program, it is also 3 p.m. May 12 and May 19, all Saturdays.

• “Paint the Galactic” from 9:30 a.m.-noon Saturday, May 12, at the park store. Park staff will set out a banner encouraging people to “join the park side” on which they can paint. It will hang at the park throughout the rest of the month.

• “Darth Crawl” at 7 p.m. May 12 at the park amphitheater. Learn the songs of insects, frogs, and other creatures.

• “Sense the Force with Yoda” at 7:30 p.m. Friday, May 18. Meet at the Pecan Flats Trailhead for a 1.2-mile, easy-to-moderate hike and “let your senses of touch, hearing, and smell tell you about the Lake Trail.”

• “Darth Baker” at 7 p.m. Saturday, May 19. The program asks the question, “If Vader was a 19th century cowboy, how would he fix his meals?” Learn how during this dutch oven cooking lesson, where you can enjoy tasty biscuits with the man in black.

“You know, the Dark Lord’s gotta eat, too,” Pannell pointed out.

• “Paddle Across the Stars” at 8:30 p.m. May 19. Cruise across the lake in your X-Wing fighter (kayak). This is a unique night paddling event. There’s a $5 fee. You can bring your own kayak as long as it has legal 360-degree, elevated lights fixed to it. It’s only for ages 18 and older. Registration is required.

• “Defeat the Empire” at 5:30 p.m. Saturday, May 26, in the central park. “Channel your inner Ewok” as you learn to use an atlatl, a prehistoric weapon with a 5-foot dart.

• “That’s No Space Station…That’s a MOON” at 8 p.m. May 26 in the central park. The program’s name is a twist on one of the most famous lines from “Star Wars.” Explore Earth’s only natural satellite with the help of park rangers and the Austin Astronomical Society. It’s a special lunar viewing party, so bring your binoculars, a telescope (if you have one), and chairs/blankets.

“It’s going to be a fun month,” Pannell said.

So try to make it out to Inks Lake State Park in May to explore the Force. Or, as Yoda says, “Do. Or do not. There is no try.”