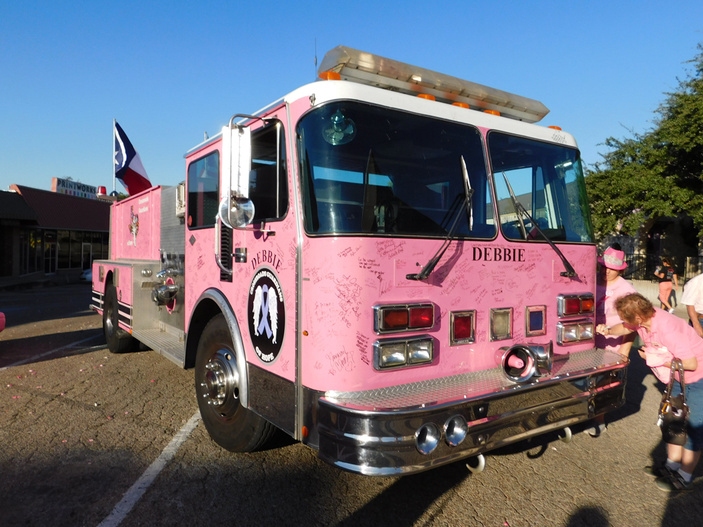 Marble Falls Fire Rescue and Save the World Brewing Company are holding a taco cook-off and beer release to help raise money to help repair Debbie, this pink fire truck. Tacos, Brews and Save Debbie is 1-4 p.m. Saturday, August 17, at the brewery, 1510 Resource Parkway in Marble Falls. The fire truck is part of Crossroads Guardians of Hope’s stable of emergency vehicles helping raise awareness of cancer. The organization provides Debbie for Pink Out Marble Falls, a community-wide cancer awareness event in September. Staff photo by Jennifer Greenwell

Is it Coy Guenter? Maybe Sam Stacks. It could be Rowan Arnold.

Which of these three Marble Falls Fire Rescue captains makes the best taco? That question will be put before the community on Saturday, August 17, during Tacos, Brews and Save Debbie, a fundraising taco cook-off at Save the World Brewing Company in Marble Falls.

The philanthropic brewery, 1510 Resource Parkway, is also celebrating its August beers with a release during the event, which is 1-4 p.m.

But back to Debbie. Debbie the fire truck is part of Crossroads Guardians of Hope’s pink fleet of emergency vehicles. She’s pretty popular. The organization loans out the fire truck and other vehicles to cancer awareness programs and events, and Debbie has twice parked it at Pink Out Marble Falls.

Pink Out is a community-wide event that celebrates cancer survivors and fighters and raises awareness of the disease. This year’s Pink Out Marble Falls is 5:30-7:30 p.m. Thursday, September 12, in downtown Marble Falls.

A big part of these awareness events, Debbie needs to look her best. However, right now, she is in need of repairs. All the proceeds from Tacos, Brews and Save Debbie go toward these costs.

During the event, folks can support their favorite of the three Marble Falls fire captains as they battle it out for the top taco and try out one of the new Save the World beers.