How the beautiful bluebonnet became synonymous with Texas 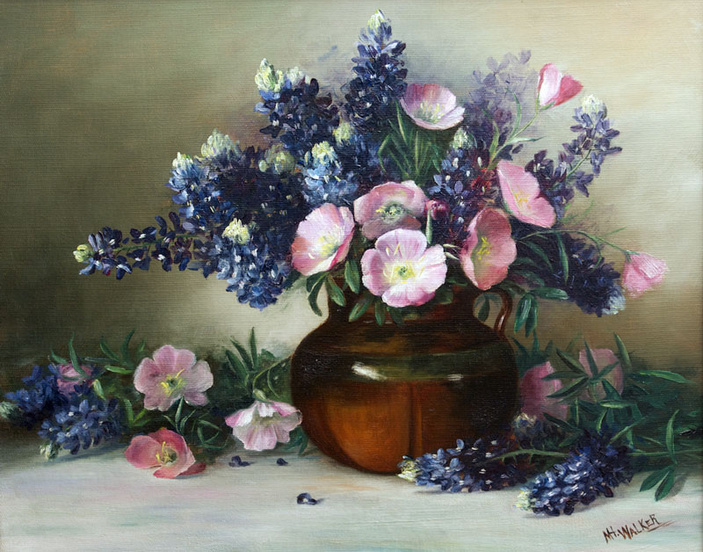 Mode Walker’s oil painting 'Bluebonnets and Evening Primrose' put the bluebonnet over the top in competition with the cotton boll and the cactus flower for status as official Texas state flower. The painting is on display at the Neill-Cochran House Museum, 2310 San Gabriel St. in Austin. Courtesy image

How the beautiful bluebonnet became synonymous with Texas

How the beautiful and pervading bluebonnet rose above the competition of a landscape of other wildflowers to become the State Flower of Texas and inspire countless small-town festivals, trails, and roadside photoshoots is a story of myth, law, and Texas identity.

FOLKLORE AND THE FLOWER

The flower that so captures people's attention each spring has long been considered legendary. Famed Texian and folklorist J. Frank Dobie included an entire chapter on the bluebonnet in his "Legends of Texas," published by the Texas Folklore Society in 1924.

According to Dobie, one legend tells of the first Spanish missionaries to the Southwest. They are said to have brought with them bluebonnet seeds harvested from the hills of Jerusalem. (Another version of this story says the seeds came from Spain.) They planted the seeds inside their South Texas missions, where the flowers flourished, quickly spreading far beyond the mission walls.

Another legend recounts how a community was saved from drought by the prayers of a young girl who was pure of heart. The child prayed on a hilltop day in and day out. She prayed so long she lost consciousness and died as the rain finally fell. She was buried on the hill, where bluebonnets sprang from her final resting place.

In another, a terrible plague among the Aztecs had priests on their knees praying to their gods for relief. Finally, the priests received a sign telling them that only a sinless, willing sacrifice could atone for the sins of their people and cure their illness. An Aztec maiden wearing a blue bonnet offered herself as the sacrifice. Wherever the young girl’s blood spilled on the altar, a bluebonnet grew. The flowers were the exact color of the maiden’s bonnet, as per the legend.

BY ANY OTHER NAME

In the time of covered wagons and scrappy settlers, the bluebonnet was known by many different names: wolf flower, buffalo clover, blue lupine, and el conejo among the most common.

The name wolf flower was used by early settlers, who believed the plant robbed nutrients from the soil. In fact, bluebonnets produce their own fertilizer, enriching the soil, according to Texas A&M AgriLife Extension Service experts Jerry M. Parsons, Steve George, and Greg Grant.

“Bluebonnet plants have the capacity, with the help of Rhizobium, to produce as much nitrogen as soybeans, which often yield as much as 100 pounds of nitrogen per acre,” the trio wrote in a Texas A&M research paper. “Because lupines are able to invade soils low in nitrogen, they have become established in disturbed areas. This is the reason why certain species are used as cover crops for the enrichment of agricultural soils.”

The name buffalo clover became popular in the mid- to late 1800s because buffaloes were believed to forage on the foliage. Cattle ranchers believed bluebonnets to be toxic to their herds, a notion backed by experts. As a member of the legume family, bluebonnets are toxic, which might be why wild boar and deer avoid them. They are rarely deadly, however, according to Texas A&M.

The Spanish name el conejo translates to "the rabbit," a term applied to the flower because of the white spots on its blue blossoms that are reminiscent of a cottontail rabbit.

As far as the Latin name for bluebonnets, the plant actually has six, one for each species in the genus Lupines. Only Lupines subcarnosus was included in the original resolution passed by the Texas Legislature in 1901 to establish it as the state flower. In 1971 — 70 years later — the legislature amended the resolution to include Lupines texenis “and any other variety of bluebonnet not heretofore recorded.” So far, that means the Lone Star State has six state flowers — if you want to be picky about it.

AND THEY WERE PICKY

The idea for states to adopt official flowers originated at the 1893 Chicago World's Fair. Women's groups festooned exhibits promoting different states with native flowers. One group even proposed a national garland with each flower symbolic of a different state. State legislatures were encouraged to adopt flowers.

Legislator John Green of Cuero suggested the bluebonnet, an idea that didn’t take hold until the Texas chapter of the National Society of the Colonial Dames of America began to extoll its virtues.

Finding that many of the legislators were unfamiliar with the name bluebonnet — they knew it as buffalo clover or wolf flower — the Dames sent for a painting. They presented Mode Walker's "Bluebonnets and Evening Primrose" to the assemblage of gentlemen.

"Deep silence reigned for an instant," wrote North Texas botanist Mary Dagger Lake in her book, “The Legend of the Bluebonnet,” published in 1926. “Then deafening applause fairly shook the old walls."

From its days as the maligned wolf flower to its elevated status as an essential symbol of Texas, the bluebonnet has come a long way. As historian, columnist, and author Jack Maguire once wrote: "The bluebonnet is to Texas what the shamrock is to Ireland, the cherry blossom to Japan, the lily to France, the rose to England and the tulip to Holland."

The bluebonnet battle for stardom had been won.