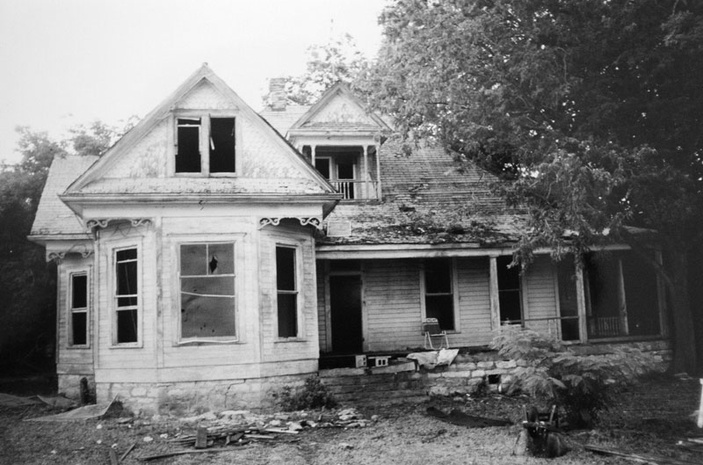 The owners of the Antlers Hotel bought the ‘Chainsaw House’ in 1998. The dilapidated building was cut into seven pieces and moved from Quick Hill in Round Rock to its current Kingsland location. Built about 1909, the Queen Anne-style cottage was the setting for the 1974 horror film ‘The Texas Chainsaw Massacre.’ Courtesy photo

The house sits in front of a beautiful garden, well-manicured with flowers, bushes, and trees. The bright green metal roof stands out from the white siding of the house.

You wouldn’t think it was the setting for perhaps the scariest horror film ever made.

The infamous house from “The Texas Chainsaw Massacre,” a Queen Anne-style cottage, is now the home of Grand Central Cafe and an upstairs bar at 1010 King Ct. in Kingsland. “We don’t really advertise it a lot,” Drew Gerencer, who co-owns the restaurant with Rick Gregory, said about the connection to the horror film. “When we first opened, we didn’t want to cater to the idea of it, because of the appetite, I guess.”

Images of chopping up people for roadside barbecue and gourmet steaks probably don’t mix in a fine-dining atmosphere.

The house was in a dilapidated state when the movie was filmed in the summer of 1973. By the 1990s, the original owners were looking for a buyer to save the building.

Built about 1909, the house was on Quick Hill in Round Rock until it was purchased by the owners of The Antlers Inn in 1998. It was cut into seven pieces and moved to its current location.

Gerencer and Gregory own Kingsland Coffee Company, and, in November 2012, they opened Grand Central Cafe in the “Chainsaw House.” 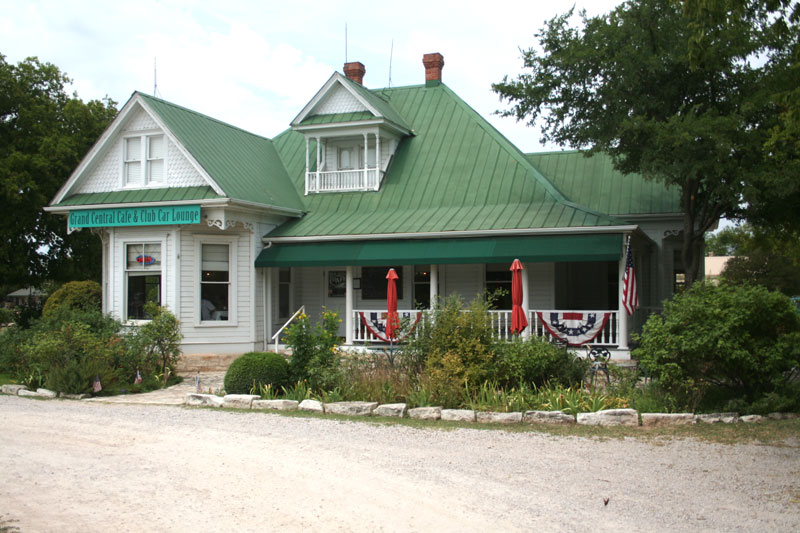 The Grand Central Cafe building is the house used in the 1974 film ‘The Texas Chainsaw Massacre.’ While the restaurant serves breakfast, lunch and dinner with an upstairs bar, many fans also come to see the remodeled house used in the iconic horror film. Staff photo by Jared Fields

Twenty tables are downstairs for hungry customers for breakfast, lunch and dinner.

Gerencer said the kitchen has changed (one would hope.)

“It’s larger; we added on and closed off a door,” he said.

Though remodeled, the dining rooms and staircase from the movie are still used by the restaurant. “We remodeled for two months before we opened, and people were stopping here every day just to see the house,” Gerencer said. “We figured out it’s a big deal.”

Not just for locals, either.

Europeans and Australians journey to the house. People driving across the country take hours-long detours just to see it.

Gerencer had to study up on the movie. He said he’s watched it a handful of times now.

The movie’s 40th anniversary was in 2014. A huge cult hit, fans could only dream of watching the movie at THE house. 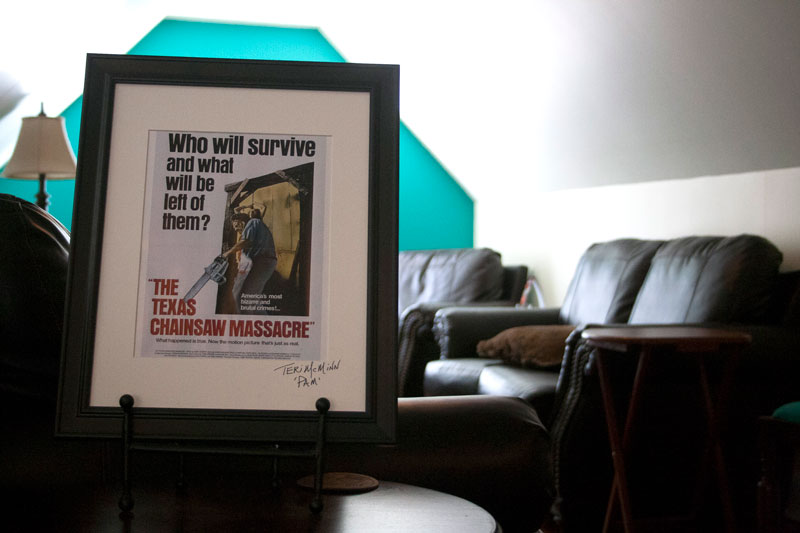 In the upstairs bar of Grand Central Cafe, the Club Car Lounge features a tabletop poster of the 1974 horror classic. Actress Teri McMinn, who played ‘Pam’ in the movie, recently visited the restaurant and signed the poster. Staff photo by Jared Fields

Although the house is known for its film history and, more recently, food, owners and staff know something else about it. “A spirit lives in the house — Julia,” Gerencer said.

Staff notice things. Bread falls off counters. Radio stations change. Footsteps are heard when no one else is there. Things turn on unexpectedly.

Although an old house, it wasn’t thought to be haunted when it was moved to Kingsland.

“I didn’t either, but there is (a ghost),” Gerencer said.

A medium visited the restaurant once. She felt a presence there and told the owners about it.

“The medium said (the spirit is) happy, content,” he said.

“My wife was getting a Coke and heard someone come in the front door,” said Jones of his wife, Sandy.

She called out a “hello?” and went to look for who was walking downstairs.

“I wouldn’t want to spend the night,” Jones said.

Jones also didn’t know the house would have such a huge following. Of people, that is.

But, in order to cater to those looking for something related to the movie, he’s come up with a few souvenirs and drink specials. Recently, a “Leatherface Lemonade” was the bar’s special. In October, a habenero-infused vodka mixed with his homemade Bloody Mary mix will be served.

Actress Teri McMinn, who played Pam in the movie, recently visited and signed a small poster in the bar. The living cast and crew members are scheduled to meet at the restaurant for lunch.

Gerencer understands the history of the house and the movie will always be a part of it.

“Most of the locals know, and if they see people walking around taking photos, they understand,” he said. “The house is so beautiful they understand if it’s (because of) that, too. It’s not too much of a disturbance to anybody.”