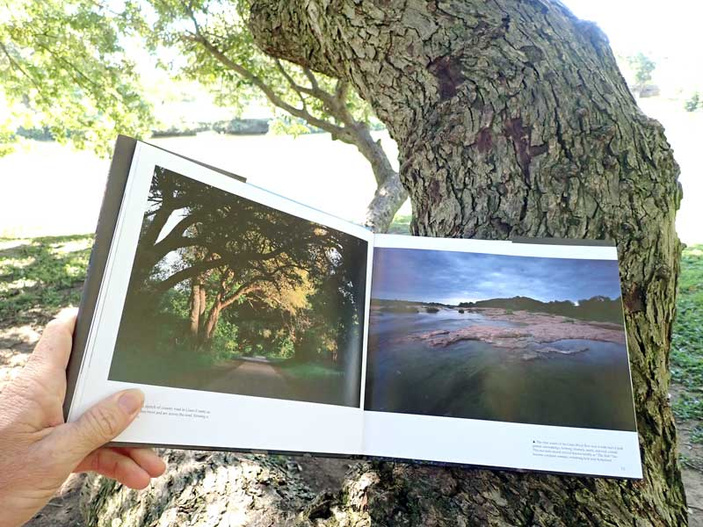 Eric Pohl’s book ‘Texas Hill Country: A Scenic Journey’ captures incredible images of the Highland Lakes and beyond. Pohl photographed some of the more iconic locations but also sought out unknown spots as well. He hopes to encourage others to get outside and explore the Texas Hill Country. Staff photo by Daniel Clifton

MARBLE FALLS — As Eric Pohl worked his way down the Colorado Bend State Park trail, he had an idea of how it would end. At the start of the trail, the temperature hovered at about 100 degrees, but on his descent, the photographer noticed a change.

The flora shifted from scrubby Hill Country brush to greener, lusher vegetation, and the temperature dipped.

“Your senses begin picking up things. You hear the water,” he recalled.

Though Pohl had never hiked the trail, he knew what was waiting.

Well, he thought he did until he arrived at the bottom and the foot of Gorman Falls.

“There’s the maidenhair fern and all these trees and the water,” Pohl said. “It exceeds expectations.”

It was one of many highlights Pohl recalled during the making of his photographic book, “Texas Hill Country: A Scenic Journey.” Released on Sept. 27, the book is a visual tour of the Hill Country, including several spots in the Highland Lakes.

Pohl photographed iconic places and scenes such as Blue Bonnet Cafe in Marble Falls and fields of bluebonnets and Indian paintbrushes, but he also takes readers on an exploration of things not often seen, a process that took two years (he thought it would only take six months).

This often pushed him off the beaten path.

“On a trail, it meant taking a way that didn’t look the easiest way,” Pohl said.

And this led to unexpected views.

Sometimes, he’d capture an amazing landscape, spreading out in front of him and begging to be photographed. Other times, he photographed more common scenes, the ones the rest of us pass by without much thought. On page 18 of his book is a photo of a stretch of Llano County road where live oak trees bend over it like a tunnel. Many of us would drive down the road and not notice the beauty formed by road and tree.

Pohl, however, saw it.

He spent time at each location he photographed.

“I wanted to show each place in the best light,” Pohl said.

This often meant returning to a spot several times or waiting until a “just right” light fell across the subject. While at Reimers Ranch Park in Travis County, a sudden thunderstorm raced through. Pohl took cover and feared his day of shooting was over. Then, he realized the storm created a special atmosphere, and he captured a photograph that remains among his most memorable.

Pohl hopes people will use his book as an inspiration for their own adventures.

“When I was posting photos on social media, a lot of people would see the pictures of Gorman Falls, and they’d want to know where I took it,” Pohl said. “They didn’t realize places like that exist here in Texas, and not just Texas, but here in the Hill Country.

“I hope the book inspires people to get outside, get outdoors, and explore what we have around here,” he added. “Hopefully, it’s also a message of conservation, that we need to keep these places as natural as we can. Once they’re gone, we’re not getting them back.”

The book is available at bookstores or online at amazon.com and barnesandnoble.com. Go to texashillcountrybook.com for more about the book or epohl.com to view Pohl’s other work.