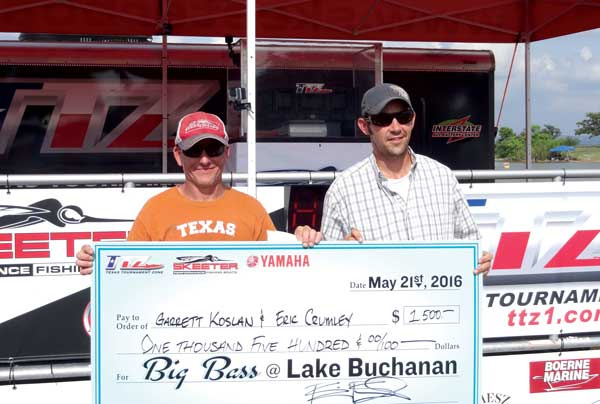 Adrian Barnes and Daniel Barnes were the big winners of the Texas Tournament Zone bass tournament May 21 on Lake Buchanan. The two landed five largemouth bass weighing a total of 23.77 pounds and netted $10,000. The event, the first such bass tournament on the lake in about four years, drew 150 teams and 295 anglers. The series returns Oct. 15-16 for the championship. Courtesy photo

BUCHANAN DAM — Brian Booker of Texas Tournament Zone had his eyes on returning to Lake Buchanan with a major bass fishing tournament the moment the rains started refilling the reservoir. He knew the lake boasted a strong fishery before the drought and felt it would bounce back after the levels rose.

The first major bass tournament to return to Lake Buchanan, a TTZ event in May, confirmed Booker’s prediction.

“We set a record with 160 teams for that tournament,” he said. “And the anglers, they landed quite a few fish. We wanted a lake where we knew anglers would have a chance to be successful, and Lake Buchanan didn’t disappoint.”

The success of the May tournament earned Lake Buchanan another place on the TTZ schedule. And this one’s the big one: the TTZ Championship. It’s set for Saturday-Sunday, Oct. 15-16.

Local businesses are also big winners, and not just during the tournament. Booker said anglers are already hitting the lake to “pre-fish” it in anticipation of the two-day event.

While Lake Buchanan lived up to expectations in May, another reason for coming back this month was the incredible enthusiasm from local businesses and the community.

“It was amazing how appreciated we were by the local community. They made us feel so welcome,” Booker said. “I got so much great feedback from anglers about how, when they went into restaurants and businesses, just how much the people there were glad to see them.”

Of course, the fishing success didn’t hurt. During the May tournament, the top team of Daniel Barnes and Adrian Barnes landed five largemouth bass weighing in at 23.77 pounds, just edging out second-place finishers James White and Wayne Alberthal with five bass at 23.05 pounds. And none of them even landed the “Big Bass.”

The largest bass of the tournament, caught by the team of Eric Crumley and Garrett Kolan, weighed 9.25 pounds. Two other teams hauled in fish weighing 8.85 and 7.62 pounds each. So, the big bass are out there.

While the spring tournament was outstanding, Booker expects an even stronger catch in October.

“The bass are feeding more during the day, especially after that first (cold) front or two comes through,” he said. “And the day isn’t quite as long, so usually, the bass are more aggressive during the day. I think it’s going to be a great tournament.”

Anglers can compete in the championship if they participated in at least three of the five regular tournaments on the TTZ schedule.

But Booker said he hopes residents will make the trip to watch the action, which is headquartered at Llano County Park, 3712 Lakeshore Drive in Buchanan Dam. The boats take off around first light, and the flights start returning at about 3 p.m. each day for weigh-in.

The weigh-in is an exciting part of the tournament for spectators as they can see the anglers and the bass. Everything is open to the public, Booker said.

“We’ll have food and lots of things for people to enjoy,” he added. “Everyone is welcome to our weigh-ins Saturday and Sunday.”

Go to ttz1.com for more information on the tournament and Texas Tournament Zone. 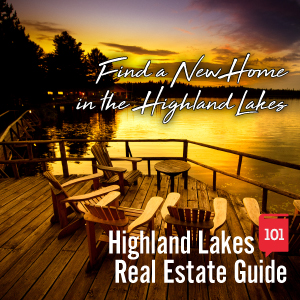