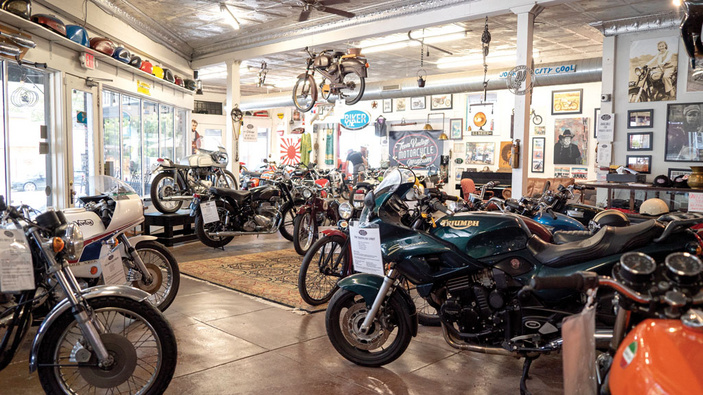 The Texas Vintage Motorcycle Museum in Johnson City boasts a collection of 80 motorcycles consisting of makes and models that span almost 90 years of manufacturing from around the world. Staff photo by Dakota Morrissiey

Motorcycles conjure thoughts of adventure, speed, fun, and even danger, but how did these dual-wheeled, maniacal machines ride into the American mythos? The Texas Vintage Motorcycle Museum in Johnson City compiles the history of motorcycling in America and showcases some of the most iconic bikes from decades past.

“These are the bikes I grew up lusting after as a kid, but I could ill afford them making $1.50 an hour pumping gas,” said Gordon Massie, owner of the Texas Vintage Motorcycle Museum, which holds his massive collection of bikes.

The now-71-year-old Massie grew up in the motorcycle mecca of the San Francisco Bay Area during the golden age of motorcycling, which started in the 1950s. By the time he was in high school, motorcycles were a widely accepted form of transportation and fun, shedding their association with violent biker gangs.

According to Massie, the 1960s advertisement campaign for Honda motorcycles did a lot to change the way motorcycles were perceived. “You meet the nicest people on a Honda,” the ads proclaimed.

The popularity of motorcycles exploded in the 1960s and '70s, and Massie’s fascination with them rocketed as well. After an injury prevented him from playing sports in high school, he turned to restoring motorcycles and never looked back. 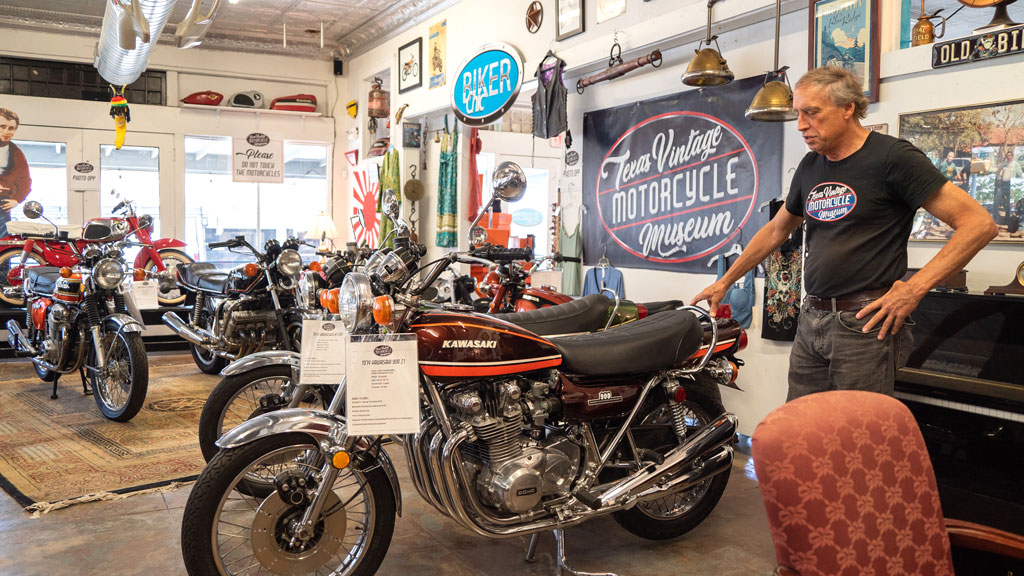 Gordon Massie, the owner of the Texas Vintage Motorcycle Museum in Johnson City, explains the history of the superbike wars between Japanese motorcycle manufacturers in the 1970s. The museum, 100 N. Nugent Ave., is open Thursday-Sunday from 11 a.m.-6 p.m. Staff photo by Dakota Morrissiey

Massie moved to Texas in 1977 and worked in corporate America for decades before retiring in 2006. In retirement, he began ardently acquiring vintage bikes. By 2021, he had 80.

All but three of the bikes on display at the Texas Vintage Motorcycle Museum are functional. Massie restored many of them himself or chose those that had been previously restored or maintained in pristine condition.

The oldest bike in his collection is a 1931 Harley-Davidson DLD. The newest is one of Massie’s daily rides: a 2017 Honda Africa Twin. The core of the collection consists of iconic bikes from the 1950s, '60s, and '70s. They come from a wide variety of manufacturers: Honda, Suzuki, Yamaha, Kawasaki, Harley-Davidson, Indian, Moto Guzzi, Ducati, BMW, Triumph, Norton, and BSA. Among the well-known names are the more obscure makes and models that only a true enthusiast would know.

According to Massie, two factors determine the value of a vintage motorcycle: the condition and the rarity. His bikes range in value from $3,000 to $40,000. Two of his motorcycles cost him more than his first home.

A motorcycle lover will appreciate the content of the museum, but everyone can get wrapped up in the mystique of the history, innovation, and love that has gone into these dream machines.

Massie chose Johnson City as the museum's site after visiting his daughter, who lives nearby. The building itself was constructed in 1930 as a showroom for the Ford Model A, which seems fitting for a vintage vehicle museum.

By April 2021, the Texas Vintage Motorcycle Museum opened its doors. By October of that year, Massie had relocated from the Houston area to the Texas Hill Country.

For now, the museum offers its collection for viewing, a space for relaxing, and biker gear for shopping. In the future, Massie plans to expand the space to include vendors and events.

When it comes down to it, this museum is a way for Massie to share his passion for motorcycles and the decades of time and effort that have gone into accumulating an impressive collection of machines and memorabilia.

The Texas Vintage Motorcycle Museum is located at 100 N. Nugent Ave. in Johnson City. Hours are 11 a.m.-6 p.m. Thursday-Sunday (closed Monday-Wednesday). Admission is $6.76 plus tax with a credit card and $6.50 plus tax with cash. Ages 5 and younger get in free.