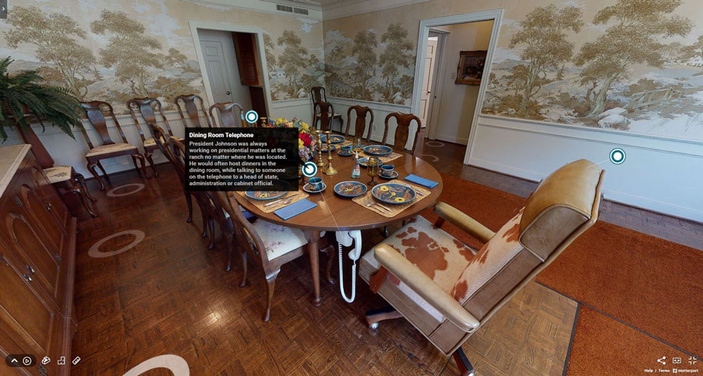 The Texas White House, once home to President Lyndon B. Johnson and first lady Ladybird Johnson, at the LBJ National Historical Park has been closed to visitors for months. Staff created a virtual tour of the home. Pictured is the dining room. Courtesy photo

You can now go on a virtual tour of the Texas White House at the Lyndon B. Johnson National Historical Park.

The former home of President LBJ, a Johnson City native, and first lady Ladybird Johnson has been closed to visitors since 2018 due to safety concerns. Since then, staff have assessed the structure, parts of which are more than a century old, and are planning to renovate it.

In the meantime, photographers have scanned every room in great detail and park staff created interpretive tags and audio descriptions for the virtual tour.

On the tour, view the first floor of the home at your own pace and learn about specific items of significance in each room. Or, hit the autoplay button for a guided tour. An audio tour is available for the visually impaired.

The tour can be enjoyed on a smartphone, computer, or virtual reality headset.

The home belonged to Johnson’s uncle Clarence and aunt Frank Martin. The president called it “the big house on the river” as it's near the Pedernales River. Johnson took ownership of the house from his widowed aunt in 1951 and expanded it. That and the LBJ Ranch were the epicenter of politics for 20 years, especially when Johnson became the 36th president of the United States. Political visitors from around the world led to it being called the "Texas White House."

For more on LBJ's historic significance to the Hill Country, read "Walk in the footsteps of President LBJ."