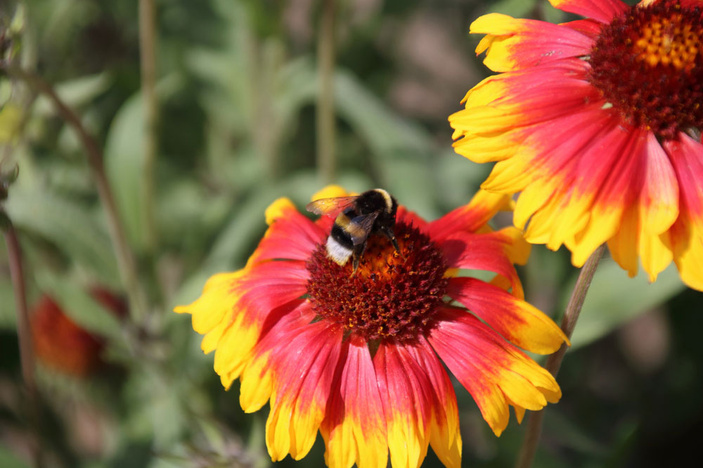 The Indian blanket, or the fire wheel, sets fields ablaze with bright orange and yellow from May through August.

Bluebonnets herald the start of the Highland Lakes wildflower season each year, but they are only one shade in a spectacular kaleidoscope of color that lasts all summer.

The indigo of the Texas State Flower gives way in April to an array of vivid blooms that keep flower peepers busy into summer and beyond.

“That’s really my favorite, from April into May,” Marcus said. “It’s the second wave of wildflowers.”

Among her most beloved blossoms is the coral honeysuckle, a wildflower that lasts long after bluebonnets go to seed in mid-April.

“It will go through the whole summer,” she said. “It’s a great hummingbird plant. It’s a great larval plant for butterflies. It’s also easy to grow and a wonderful vine.”

“It looks like a big year for gaillardia,” Marcus said.

The fall and early winter rains helped set up wildflowers for success this spring and summer, but Marcus pointed out an especially dry February could cause slight damage.

However, native wildflowers are among the most resilient of God’s handiwork. This year, they withstood a lingering late freeze after blooms first began to appear.

But she’s not too worried.

The Highland Lakes wildflower season is far from over. Here’s a look at the second wave of color getting started.

(ABOVE) The flower’s petals spread out like a fan from deep red in the center to yellow on the fringes. It blooms May through August, but its season can be longer or shorter, depending on rainfall. For gardeners, it’s one of the easiest wildflowers to start and grows in a variety of soils. 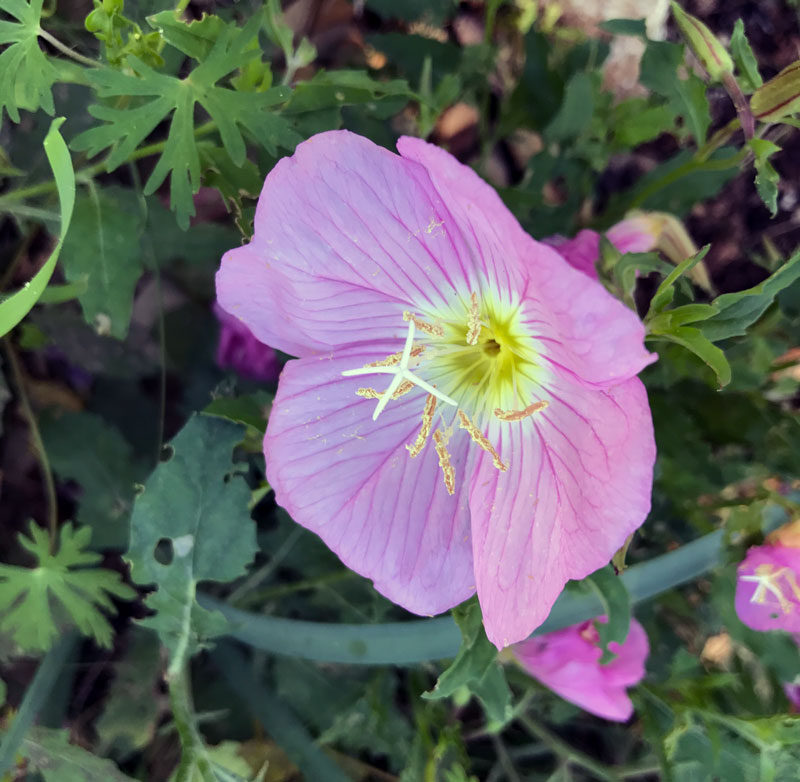 This pink, classy wildflower blooms February through July. It releases a scent at dusk, hence the moniker. Picked before blooming, the plant can be cooked as greens or eaten fresh in a salad. 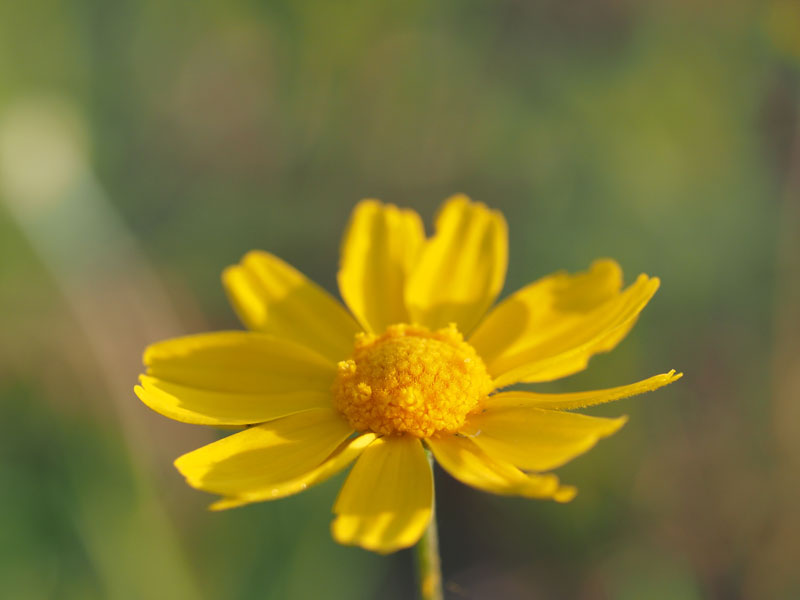 The four-nerved daisy, which gets its name from the four purple veins visible on the underside of the flower, doesn’t let the time of year keep it from blooming. This yellow wonder will flower anytime the conditions are suitable, even in the month of January. Its yellow blooms offer a nice contrast to the deep blues of the bluebonnets. 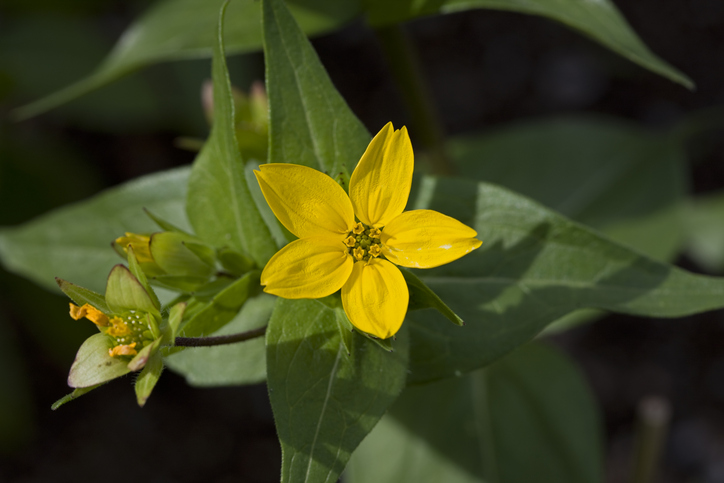 Gardeners love this beautiful yellow bloom that easily grows between 6 and 24 inches tall. It has one or more flower heads clustered at the end of each stem. 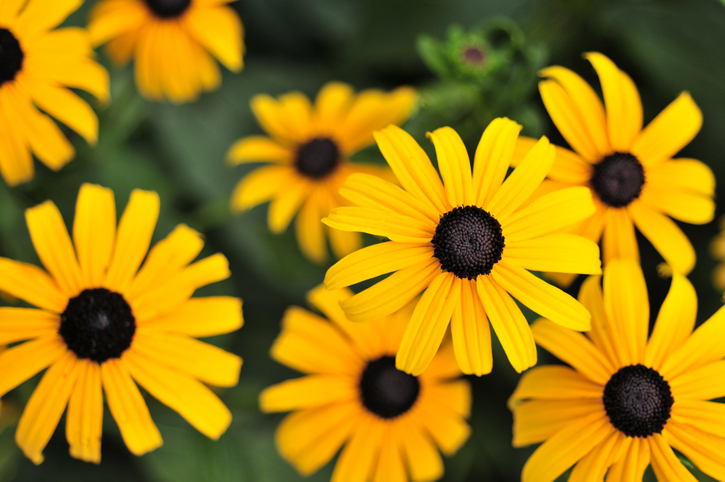 A late season summer treat with its distinct, spindly yellow petals, this wildflower wonder draws the eye — and pollinating insects — to its brown or black center. The burst of bright yellow with bold black dots turns open spaces into God’s artwork. 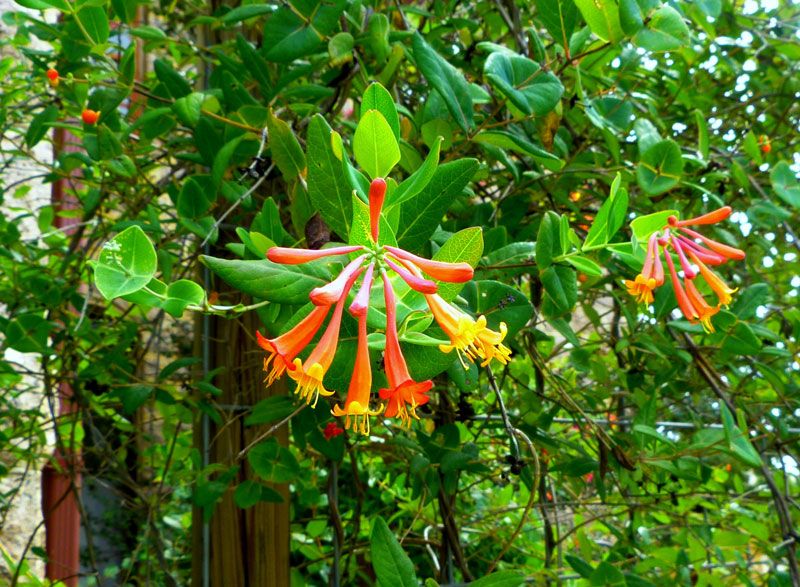 Hummingbirds love the drop-down clusters of flowers that hang from vines as long as 20 feet. It blooms in red and yellow through June and is easy to grow. It’s also easy to find at nurseries and adds a bright splash of color to any garden. 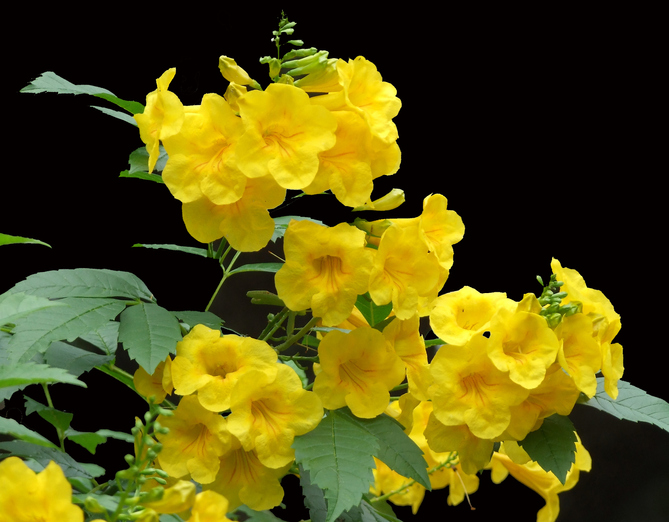 This yellow flowering vine grows through June but wraps up its blooming in April and early May. Native bees, butterflies, and hummingbirds love its fragrant nectar, which is toxic to honeybees. 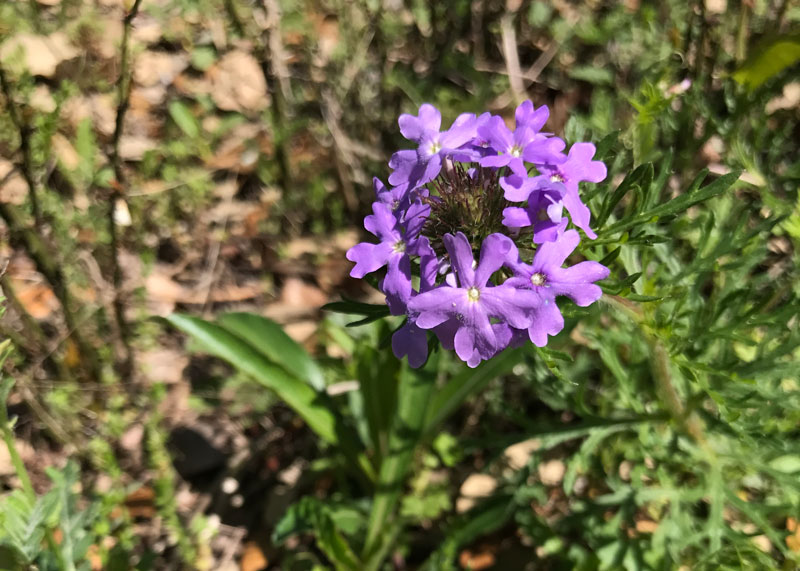 Often overlooked, the prairie verbena, with its purple or lavender clusters, loves open areas and beautifully covers wide expanses of land. It is the perfect deer-resistant color for large areas. 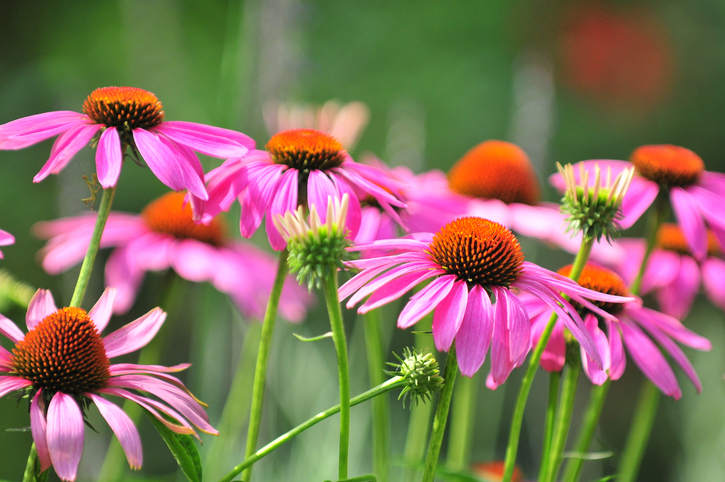 This cascade of color can bloom from spring through September. Its drooping purple petals fall away to reveal a cone-like center, thus the name. A member of the echinacea family, it is used in herbal teas and extracts marketed to improve white blood cell count. Native bees especially love this blossom. 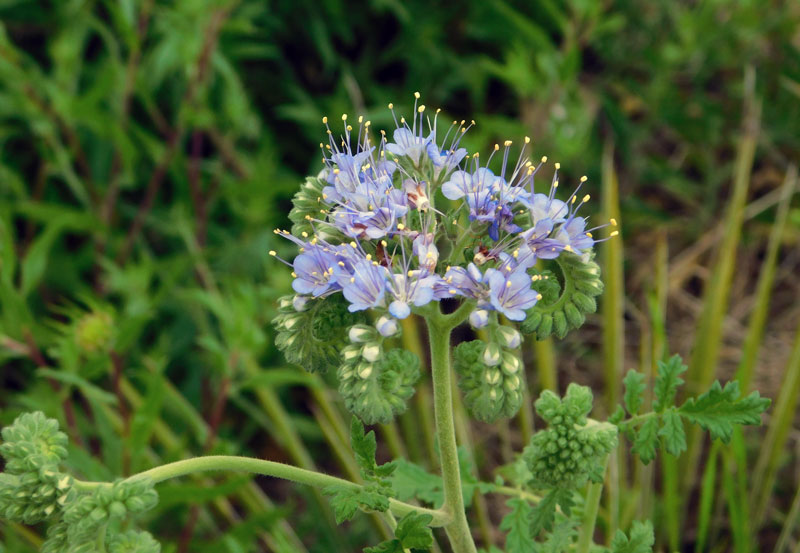 The lovely lavender-blue flowers on the blue curl, also called a fiddleneck and or a caterpillar, are very attractive to bees and butterflies. It is often found beneath the shade of a live oak or a pecan tree and is common across the Hill Country from March through May. 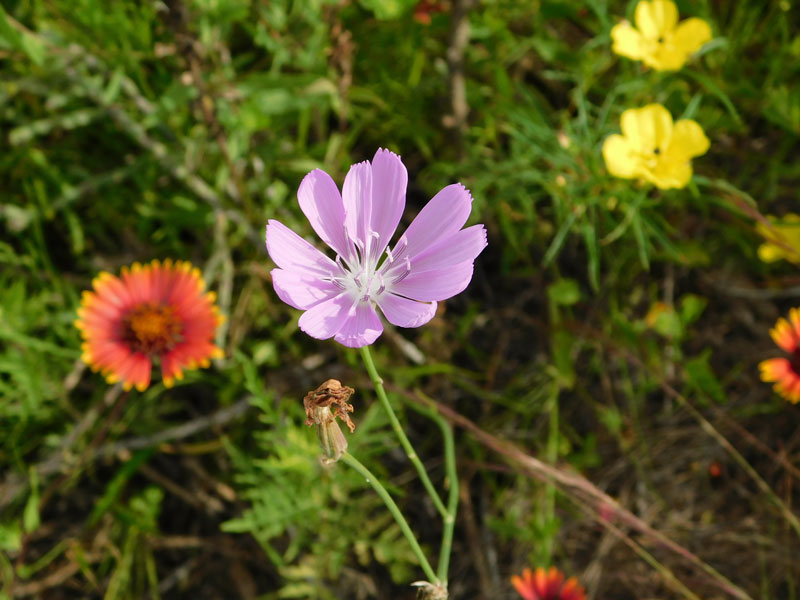 This pretty little flower blooms a light pink-purple (sometimes white) from April through August and often attracts butterflies. Wondering why the rather grave name? With few noticeable leaves, it appears as a bare "bony" stem. 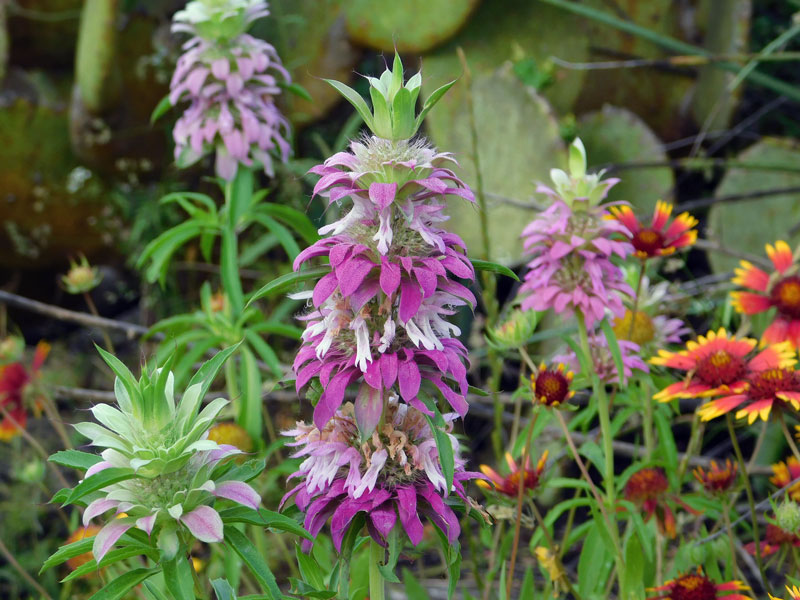 Also known as lemon beebalm, this extravagant bloom is usually seen from May through July but will bloom into October during an unusually wet season. Horsemint attracts bees, butterflies, and hummingbirds. 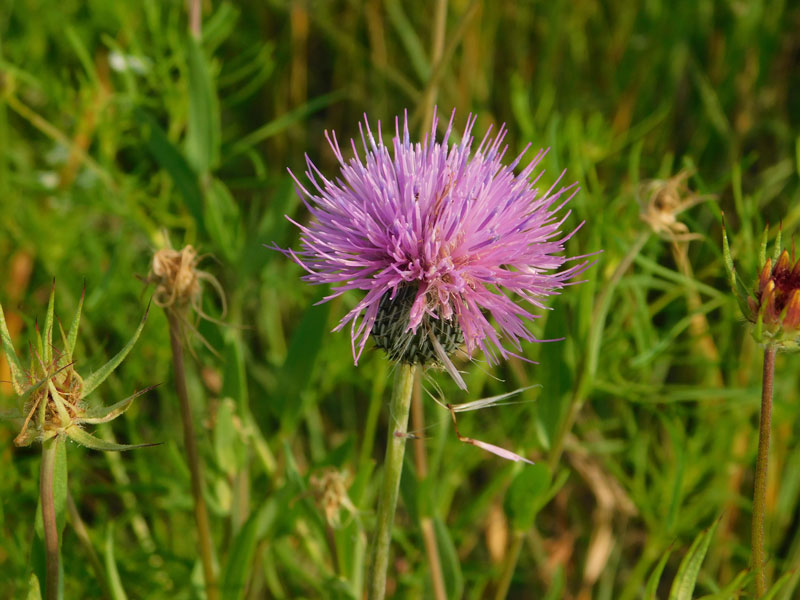 This drought-tolerant native blooms from April through August. Its fuzzy lavender puffs attract bees, butterflies, and birds — particularly goldfinches, which eat the seeds and use the fluff of ripened seeds to line their nests. Texas thistle is also a larval host for painted lady butterflies. 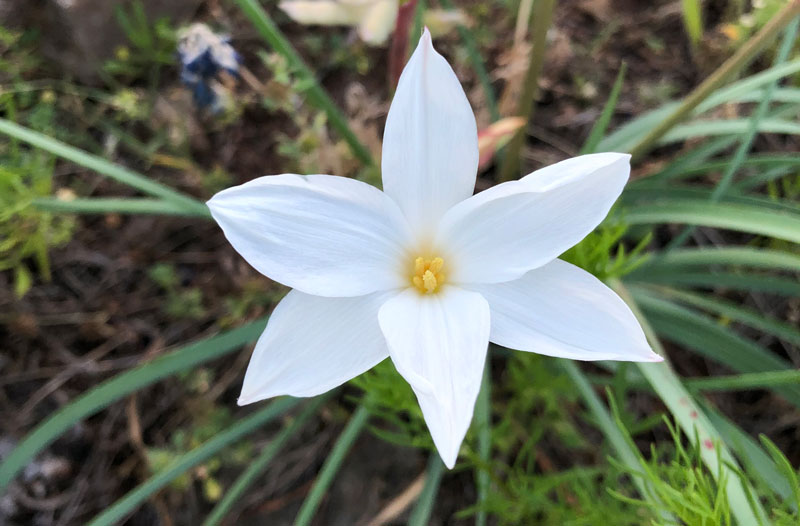 Also known as evening star rain lily, these delicate, single, white flowers can be found from May through September. They almost always show up a day or so after a rain, hence the name. 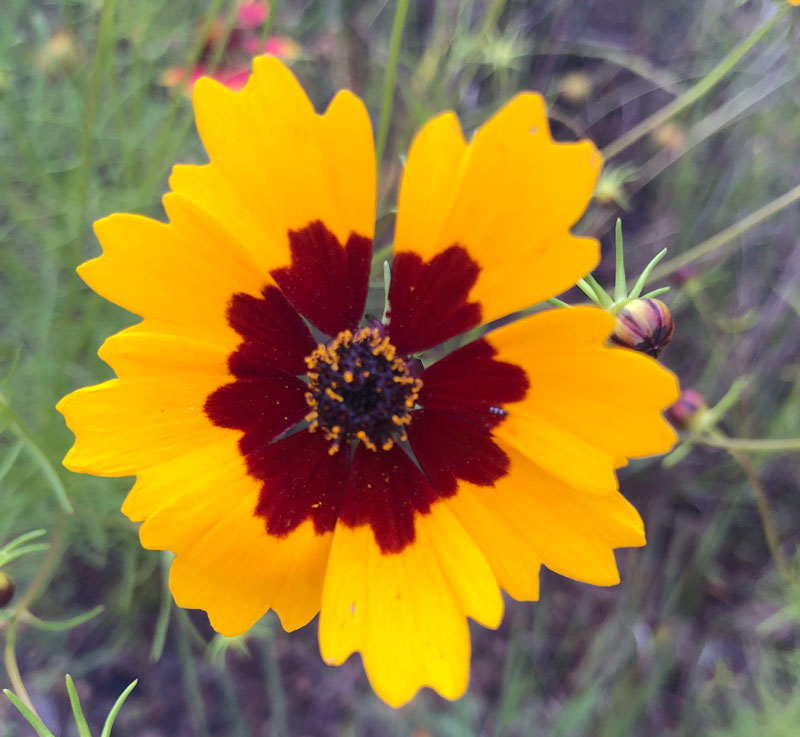 Also known as calliopsis, coreopsis, or golden tickseed, some of these sunny yellow-gold, scalloped flowers have maroon centers. It blooms from April through June. Birds, butterflies, and bees are wild for this flower.

Fun fact: Flower parts were used as a source of yellow and red dyes. 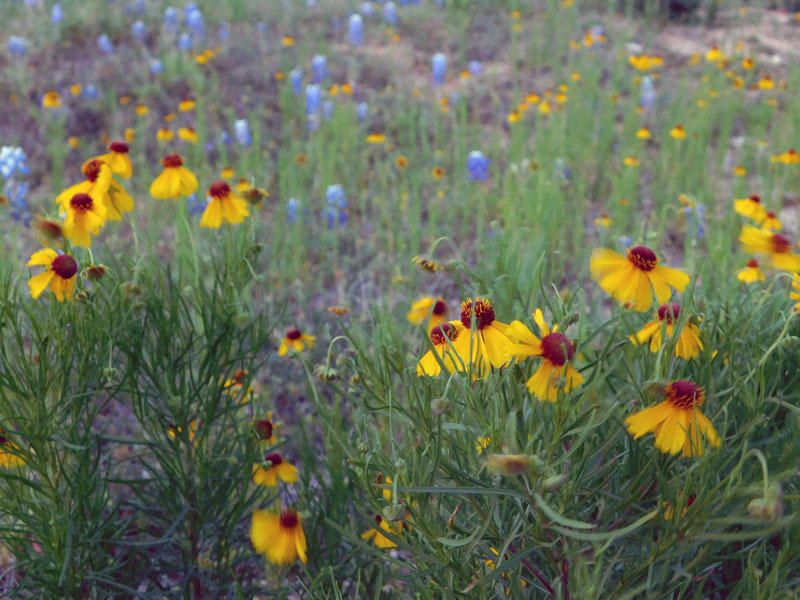 This member of the aster family has bare, thread-like stems and foliage with yellow blooms and reddish-maroon centers. It blooms from February through December and is a nectar producer. 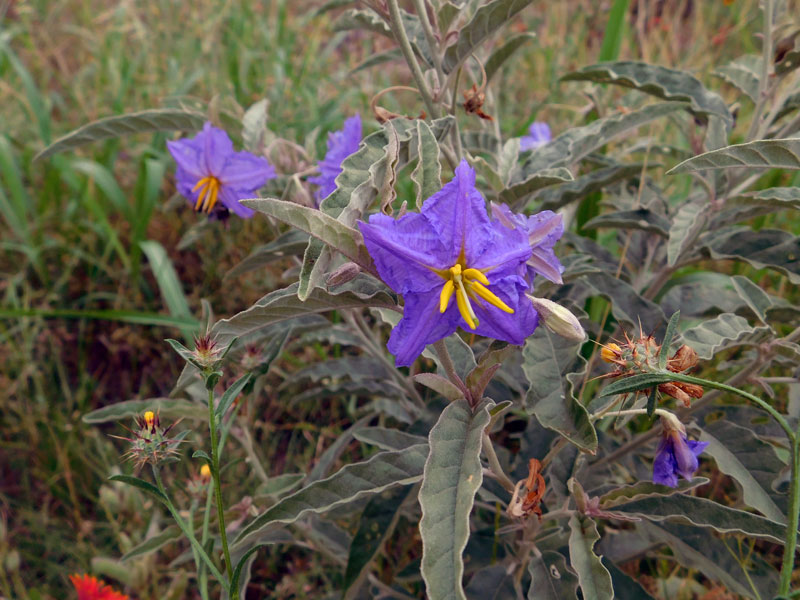 Also known as white horse nettle, this lavender flower blooms from April through October. All parts of the plant are toxic to people and animals, but is a source of nectar for bees and butterflies. It easily spreads and can be hard to get rid of. 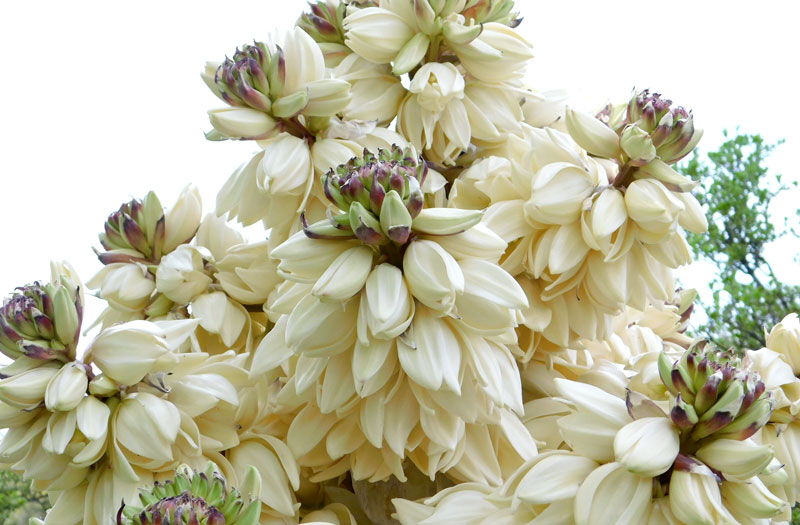 It blooms from April through July in the Hill Country. The great, white blooms are attractive to butterflies. In fact, the plant is a larval host for yucca giant skipper butterflies. Although the plant itself is deer-resistant, the animals find its blooms irresistible. 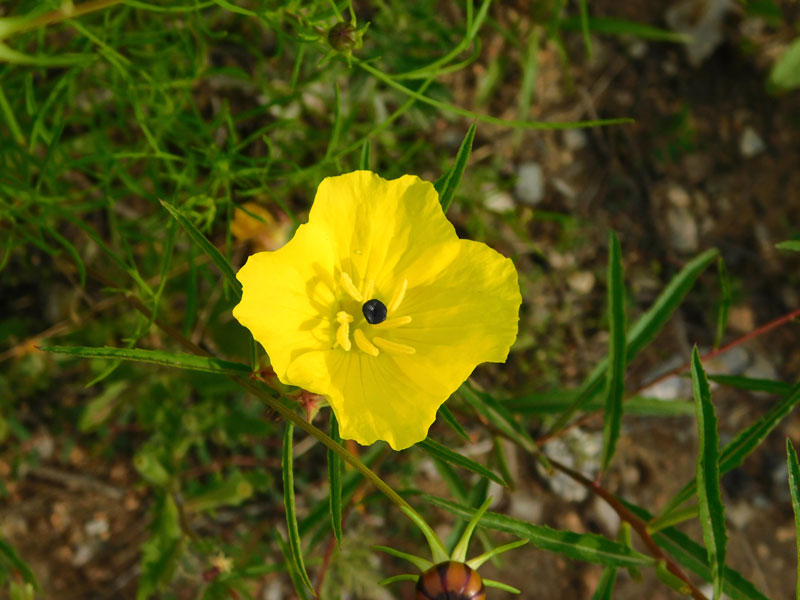 This night-flowering bloom can be spotted from July through September. It attracts birds, including hummingbirds, and moths.

Fun fact: The roots of the yellow evening primrose have been used medicinally for bowel issues, eczema, and migraines as well as in a poultice to heal bruising. 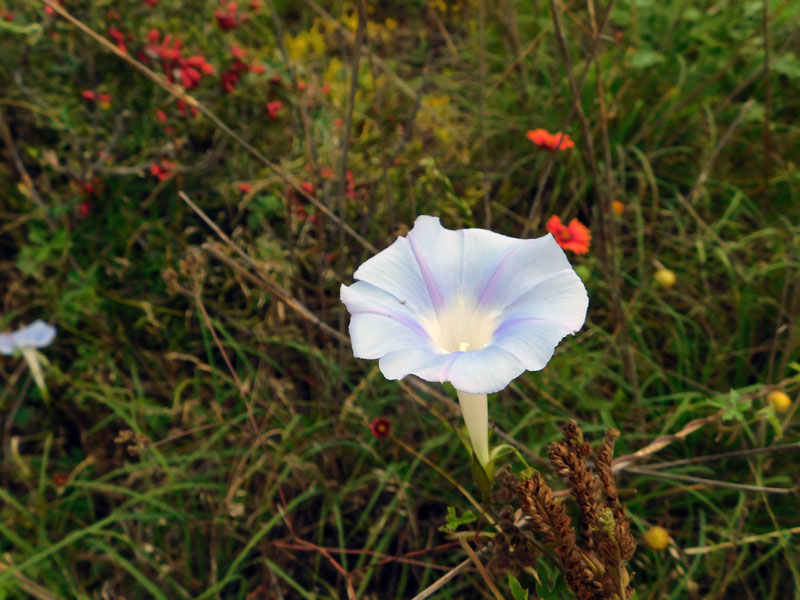 Also called blue morning glory, these sky-blue blooms with white centers can be seen in the morning from April through October.

Fun fact: This variety was named after Ferdinand Jacob Lindheimer, the "Father of Texas Botany," who was the first-known Texan to collect plant specimens. 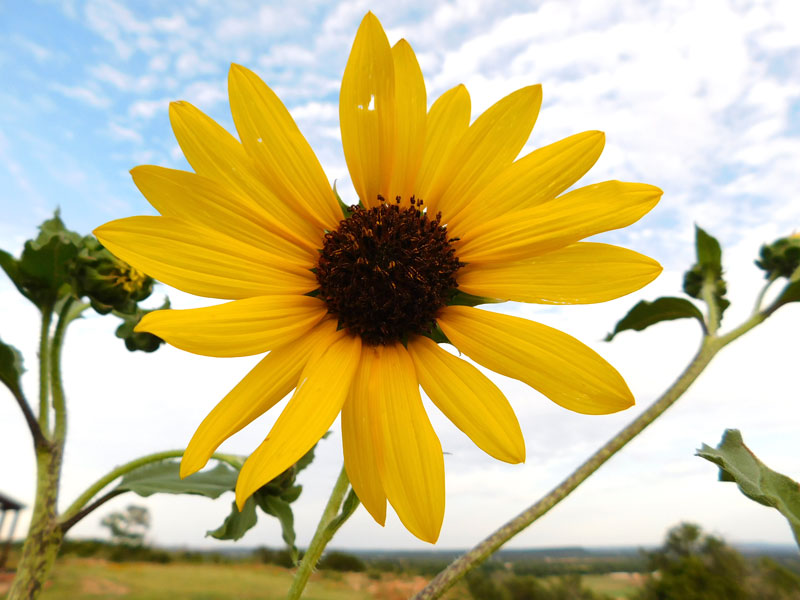 This hardy flower is a staple in the Hill Country with giant blooms from July through October. It attracts birds and bees. 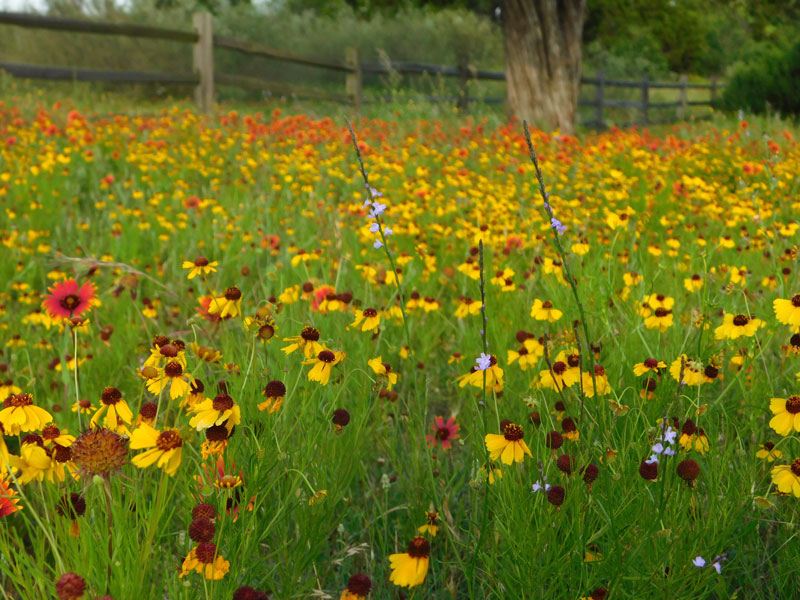 Also known as Texas vervain and slender verbena, these tall, grass-like stems are most noticeable from March through June when the tiny blue-purple blooms arrive. Butterflies and bees enjoy these miniature blooms. 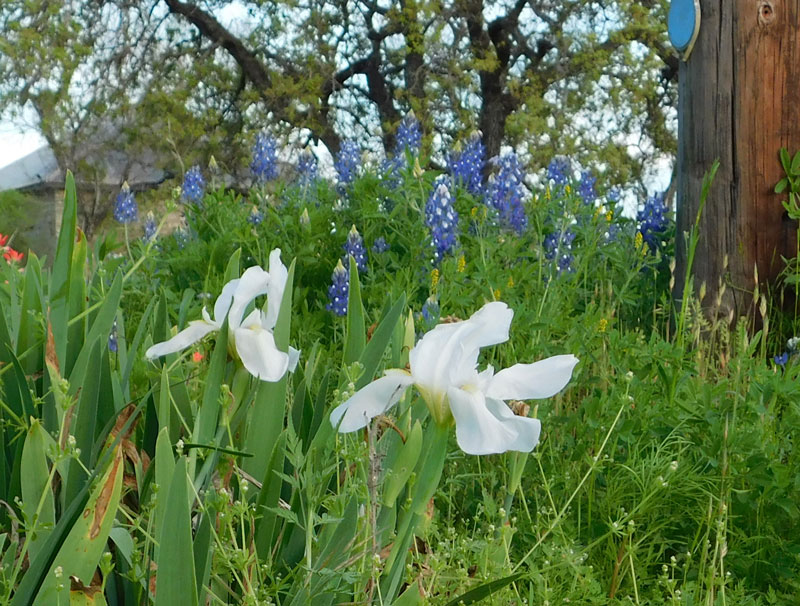 This pretty flower is not a Texas native. It comes from South Africa, where it was first used as a gravesite decoration. It blooms in the Hill Country beginning in April. 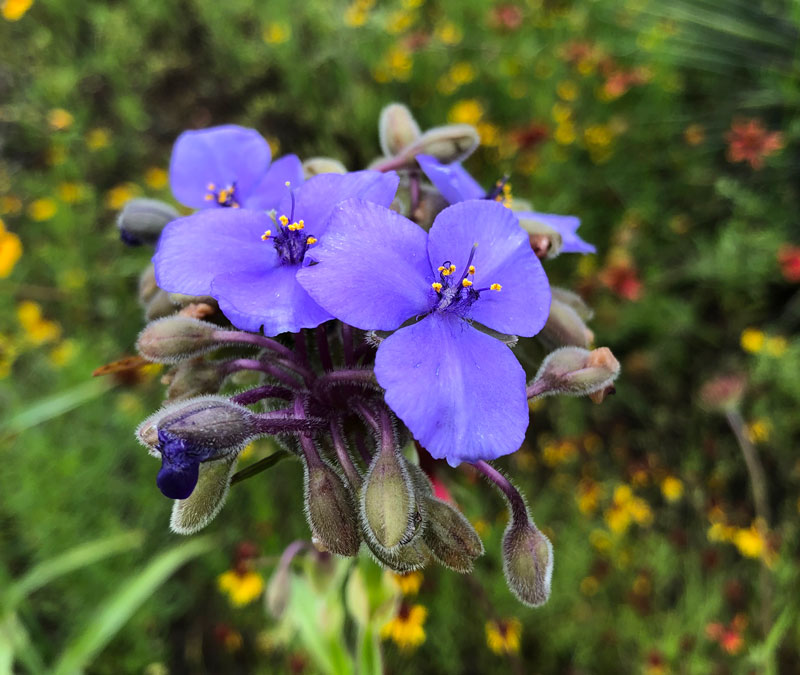 This beauty opens its blue-violet blooms in June and July. With stems standing nearly 2 feet tall, the flowers appear in clusters. Spiderwort flowers are a source of nectar for native bees.

Nice article. You might like to know that the prairie verbena was called Sweet William by the old folks. And kids used to pull the little blooms and suck the sweet nectar from the bottom.