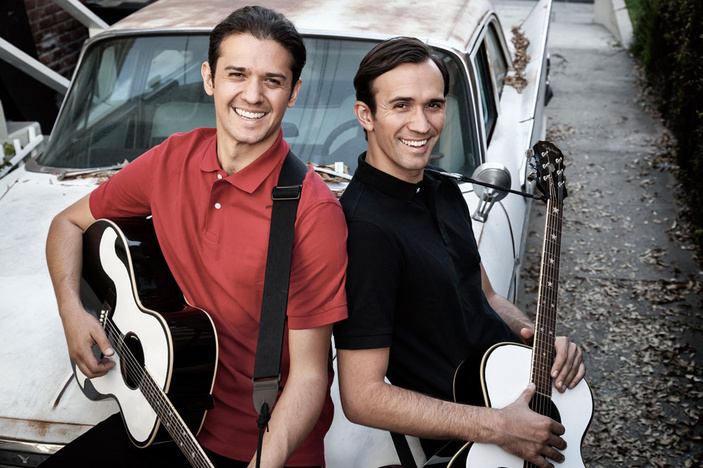 Dylan and Zach Zmed of The Zmed Brothers will sing the hits of The Everly Brothers during a concert at Quail Point in Horseshoe Bay on Feb. 28. Courtesy photo

The Zmed Brothers celebrate the influential music and impact of The Everly Brothers every time the duo takes the stage. In the Highland Lakes, that will be at 4:30 p.m. Sunday, Feb. 28, at Quail Point Lodge, 107 Twilight Lane in Horseshoe Bay, another Horseshoe Bay Cultural Enrichment Society event. Tickets are $45 each and can be purchased at hsbenrichment.org.

Since 2016, brothers Zachary and Dylan Zmed and drummer Burleigh Drummond have felt the influence of The Everly Brothers every time they sing “All I Have To Do Is Dream,” “Bye Bye Love,” and “Wake Up Little Susie.”

"The music of the ’50s and ’60s are nostalgic for us, our parents raised us all on it, and we feel that the Everlys’ contribution is greatly overlooked, especially by younger generations,” the brothers said in a media release. “Our aim is not to impersonate but to do our best in honoring the aesthetics of their iconic sound and in honoring the important role they played in pioneering the Rock ’n Roll movement, all while having a little fun sharing our personal story.”

The Everly Brothers’ career spanned more than five decades. They recorded 21 studio albums that sold more than 60 million records worldwide. Those records produced more than 30 billboard top 100 singles, which is still the record for most billboard charting hits of any sibling rock duo ever.

They influenced The Beatles, Simon and Garfunkel, The Beach Boys, The Rolling Stones, Bob Dylan, The Bee Gees, and Neil Young.

In honoring The Everly Brothers, the Zmeds also honor two others: their parents Barbara and Adrian Zmed. Adrian’s career as a singer, dancer, and actor led him to roles on “Grease 2,” “Bachelor Party,” and “T.J. Hooker.” Barbara was a second-grade teacher.

The Zmed Brothers learned to be performers from their father and are educating people about The Everly Brothers’ music and greatness as they perform.