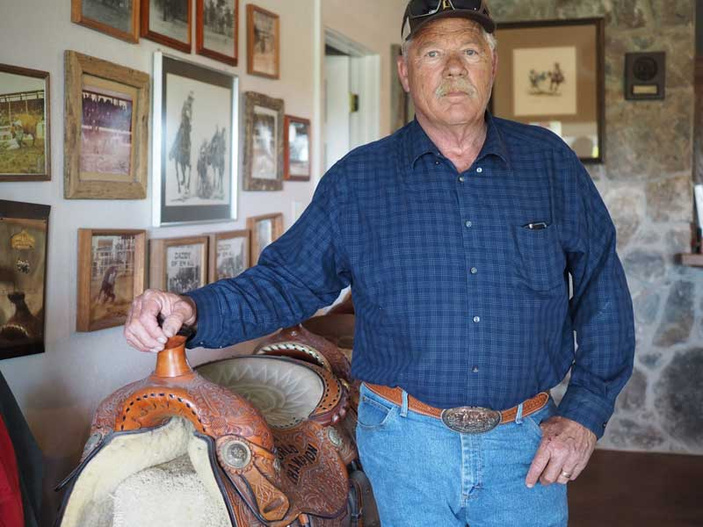 Tommy Puryear of Burnet stands next to his 1974 World Champion saddle. The former steer wrestler will be inducted into the Pro Rodeo Hall of Fame in August. Staff photo by Daniel Clifton

BURNET — When Tommy Puryear’s phone rang March 28, 2017, he picked it up never expecting to receive the news he heard.

The 1974 World Champion steer wrestler and Burnet resident learned the Pro Rodeo Hall of Fame was inducting him into the 2017 class. The induction ceremony is Aug. 5 at the Hall of Fame and Museum in Colorado Springs.

Puryear said he was speechless and had no idea he was even nominated, much less had been selected.

“I didn’t know it was that time of the year,” he said. “There was no build-up or lead-up. I didn’t have a clue it was happening.”

Puryear, who started his career in 1969, said he began bulldogging at a time when the sport was changing.

At the time, the sport was mainly made up of West Texas-New Mexico cowboys, but the event was picking up steam across the rodeo world. The cowboys who were hitting the rodeo circuit at that time began to see themselves more as athletes. It wasn’t enough to just bring their ranching backgrounds to the arenas, they also began approaching the sport with an athlete’s mindset.

Puryear took up steer wrestling in college. He wanted to participate in high school, but his dad wouldn’t allow it, believing the younger Puryear could earn a football scholarship.

While he was playing football at Lamar Tech in Beaumont, the 6-foot-1-inch, 220-pound Puryear decided to give rodeo and bulldogging a go.

He immediately fell in love with the sport after his first rodeo.

As a single guy, his time was his own. He didn’t own a vehicle at first, so he relied on the generosity of others to take him to the next rodeo and had to use “someone else’s horse” to compete.

“It’s a fun lifestyle,” he said. “You’re sleepy all the time. You have nothing to do.”

The year he won the world championship, he had competed in 127 rodeos. This often meant waiting around for the results of one rodeo then immediately heading out in his pickup for the next one. Since his livelihood depended on winning money at rodeos, it just made sense to hit as many of the events as possible.

Puryear said there’s nothing quite like being a steer wrestler, and he found describing the experience difficult.

“It’s just an adrenaline rush overall,” he said after thinking about it for several seconds. “It’s no different than any other sport. I rodeoed pretty hard for 12 years. If you don’t get a rush out of the crowd cheering, you’re not human.”

He slowed down a bit, cutting back to about 70 rodeos a year before leaving the sport in the mid-1980s because of burnout. Surprisingly, he only suffered one broken arm in his career.

And though the money was nice, it was about one simple truth: He loved it.

“Back then, money wasn’t the reason. You did it because you loved it,” Puryear said.

He looks back fondly at his time as a rodeo athlete, and it still plays a big part in his life because his wife, Peggy, competes as a barrel racer.

In addition to traveling to local rodeos to support her, Puryear said people can find him on community sports fields as he cheers on his grandchildren and enjoys a lot of family time with them and his children.

The highlight of his career, he said, was winning that world championship.

“Obviously, it’s the pinnacle of it,” he said. “It’s as good as it gets. I was having fun. You wanted to win enough money to go to another rodeo. I think that’s what a lot of guys wanted when they were starting out.”