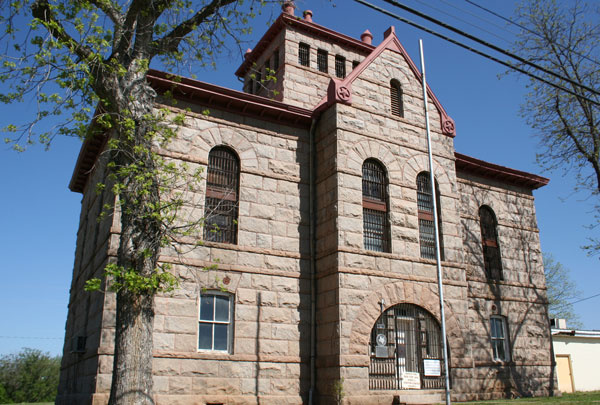 Tours of the Red Top Jail in Llano will be offered Dec. 5 after they were stopped in 2011 due to renovations. File photo

LLANO — Before Kim Webb moved to Llano in 2009, she took a tour of the Red Top Jail. The tour and the building stuck with her, so when she moved to Llano, there was one thing in which she wanted to be involved.

“That was one of the committees I knew I wanted to be apart of,” she said about the organization giving the tours. “The person giving the tour was so informative. I liked Llano’s Western history. It was so neat inside.”

But as the jail’s structure began to deteriorate, Webb learned those tours that enthralled her could become a thing of the past.

Since 2011, the tours were stopped to allow the Friends of the Llano Red Top Jail to renovate it.

But on Dec. 5, to celebrate its 120th birthday, the Friends group is hosting a party complete with tours to allow folks to see the progress made at the jail.

The free guided tours of the jail, 400 Oatman St., are 10 a.m.-4 p.m. Donations are accepted since there’s still more work to be done. Regular tours will resume at a later date.

“We do have some debt at the moment,” said Frank Rowell, vice president of the Friends group. “We’re trying to raise money. Any contributions are handy. Anything like that will go a long way to help.”

Friends members will be bringing desserts to give to tour takers to commemorate the occasion.

The Friends group officially took ownership of the jail earlier this year. The group and the city of Llano took out a loan that paid for a new roof and 32 piers to stabilize the building.

“We used our first grant on the roof because it was in such bad shape,” said Webb, who is the Friends group secretary. “The towers were stabilized so they would not continue to lean. And we did the piers. That was a big step.”

The floor was picked up and the floor joist removed, she said. The Friends group made benches out of the old wood, which are for sale.

The facility still needs windows in some places, Rowell said, and Webb added that the group wants to use salvaged wood on the floor.

Tour takers will not see the gallows because of ongoing renovations, the secretary said, but they’ll be able to see the original graffiti inside the jail the Friends group believes is important to maintain the character of the facility.

Friends group president Martha Rowlett said the first-floor ceiling needs to be fixed, electrical work must be done and the outside bars and ceiling still need to be painted.

“We’re going to keep the upper two levels pretty much the same,” she said. “The upper level is staying like it should be.”

“It’s a big part of the community and county,” he said. “It’s very important to not lose history. So many things are gone now. You cannot go back ever. It’s gone.”

“So many towns are losing old buildings,” Webb said, “and we are saving a part of history for Llano County.”

Friends group board member Patty Pfister said the plan is to continue to give tours while still completing renovations. The Friends group is still working out the details of how it wants to accomplish this, she added.

Despite all that remains to be done, the trio are looking forward to welcoming people to the jail to see the progress, especially since it’s been four years since tours were given.

“I’m so excited, our group is so excited to have the jail open,” Webb said. “We truly love the building. Our mayors, past and present, our city council have all worked very hard to help save the building.”

Meanwhile, the group is always looking to add more members, Pfister said, and interested people don’t have to live in Llano to join.

Go to redtopjail.com to become a Friend or to learn more about the facility.

“We need every Friend we can get,” Pfister said.

Sat. Morning a week ago, cold and windy, stopped in front and took a look and read the TX Hist. Marker, along with a teacher-friend from Denton TX. Impressed to know that it is being saved. Kudos to all involved. / We pondered the gallows, the "drop," the executioner's likely overnight stay before the hanging and the fact that hangings were not always public "necktie parties." Good luck. I'll be back. Was lucky to attend the re-dedication of the County Courthouse years ago.