Trick Rider Ginger Duke is Back in the Saddle 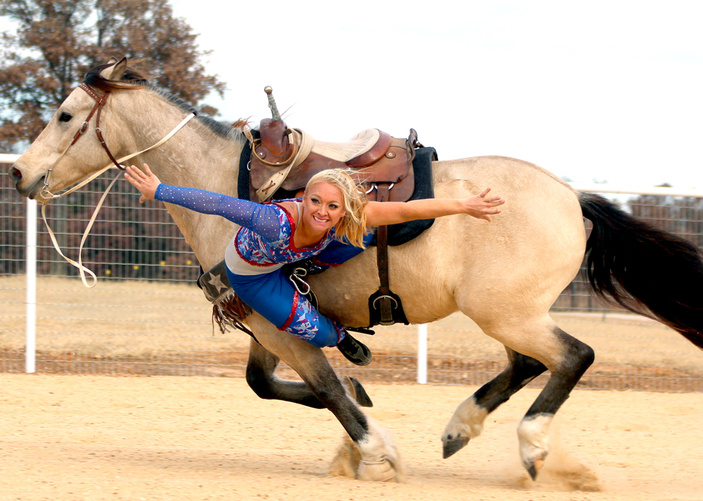 Trick rider Ginger Duke almost lost her life in February after a horse kicked her in the abdomen. After several surgeries, Duke is back to performing with a stop July 20-21 at the Marble Falls Open/Pro Rodeo at Charley Taylor Arena. Photo by Briezie Luedecke/Luedecke Photography

Trick Rider Ginger Duke is Back in the Saddle

BOERNE — In the world of trick riding, the term “death-defying” gets used a lot, but when entertainer Ginger Duke rides into the Charley Taylor Rodeo Arena on July 20-21 for the Marble Falls Open/Pro Rodeo, she’ll do it just months after a horse accident put her on the brink of death.

“I’m one of the only people to live through the injuries,” she said. “Most who get those injuries are in car accidents.”

During the rodeo offseason, on Feb. 9, Duke, who is a horse trainer as well as a professional trick rider, was working with a horse when it kicked her in the abdomen.

She didn’t lose consciousness but felt like she was going to pass out. She made her way to the barn to call her boyfriend to tell him what happened and ask him what to do next.

“It hurt, but it always hurts when you get kicked,” she said. “There was nothing to indicate I had been severely injured.”

After Duke got off the phone with him, she called his mother, who was retired from the medical field. His mom came to the barn right away, and the two made the decision to head to a Boerne emergency room after Duke's pain worsened.

Medical staff immediately took tomography scans and called an ambulance to transport Duke to a trauma center in San Antonio.

While the doctor gave her a rundown of her injuries, all Duke heard was "lacerated pancreas" and thought, “People live with that.”

“When the doctor read (the injuries) to me, I was surprised, but I didn’t think anything I had was life-threatening,” she said.

The events that followed contradicted that thought.

While the ambulance was en route to San Antonio with Duke, it was involved in an accident. But the ambulance driver didn't stop; they just took down the other driver's license plate and raced on.

Then, when Duke arrived at the San Antonio hospital, a chaplain was waiting for her. The chaplain told Duke he wanted to pray with her — now. As they prayed together, the trauma center medical staff interrupted them, stuck an oxygen mask on her, and whisked her off to the operating room.

“I still didn’t realize the extremities of my injuries,” she said. “I didn’t understand the severity.”

When she finally regained consciousness, Duke looked at her legs and thought, “Whose bean pole legs are those?” She had lost a lot of weight in just a few days.

The kick did serious internal damage. Duke had a lacerated pancreas, a hematoma on both sides of her pancreas, and a lacerated duodenum. Doctors removed 7 inches of the duodenum — the first part of the small intestines after the stomach — clamped it off, and rerouted her intestines to the other side of her stomach so she could digest food.

She spent 30 days in a military hospital in San Antonio, 14 of them in intensive care, and had a feeding tube and another tube for excess fluid from her pancreas.

As a result, she lost 35 pounds, dropping to 100 pounds total. With so serious a trauma, her body was eating everything it could, including its own muscle, to survive.

Returning to trick riding was questionable. One doctor told Duke she’d never ride again, while another said she would need a year before she could get on a horse.

Duke only need five months. And she was not only riding, she was performing. Her last surgery was June 29, and her gastroenterology doctors released her July 2. The next day, Duke was on a horse, though no trick riding.

On July 5, three days after receiving a doctor's release, she was back in the saddle at the Belton rodeo, performing again without a practice session. It was all from muscle memory.

Her routine includes feats such as standing in one stirrup while lifting her other leg high, putting her back on the horse’s left side, and balancing in the stirrup as well as carrying the American flag and a giant sparkler while standing on the saddle as the horse runs from one end of the arena to the other.

After she performed, Duke thanked the crowd for their prayers.

“It felt great; it was nerve-wracking,” she said. “It felt like the first time to perform all over again."

Duke credited her physical fitness level at the time of the February accident for why she not only survived it but was able to return to trick riding so quickly.

“I had been working extra hard to stay in shape,” she said.

As Duke looked back, she knows she was closer to death than to life and noted how blessed she feels. Most don’t even make it to a hospital after sustaining that type of injury, she added.

Besides being in tip-top shape, Duke believes other factors contributed to her survival, including the power of prayer.

She said people all over the world prayed for her and expressed their well-wishes on the "Smiles for Ginger Duke" Facebook page.

She also had a great medical staff “that thought outside the box.”

Duke said her survival story has motivated others to be serious about their own health and stop with the excuses.

When she signs autographs, she writes “Never Give Up,” which has taken on a whole new meaning.

“I’m a pretty determined person,” said the Granbury native. “I’m always striving to be better than I could be, and I’m always my worst critic. I strive to push myself all the time. I could beat the odds.”

Duke performs both nights of the Marble Falls Open/Pro Rodeo, which is Friday-Saturday at Charley Taylor Rodeo Arena, located a mile south of Lake Marble Falls on U.S. 281. Gates open at 6:30 p.m. both days with the rodeo starting at 8 p.m. Admission is $10 for adults on Friday and $15 on Saturday, which includes a dance and concert after the rodeo that night. Admission is $5 for ages 7-12 on both nights and free for ages 6 and younger.