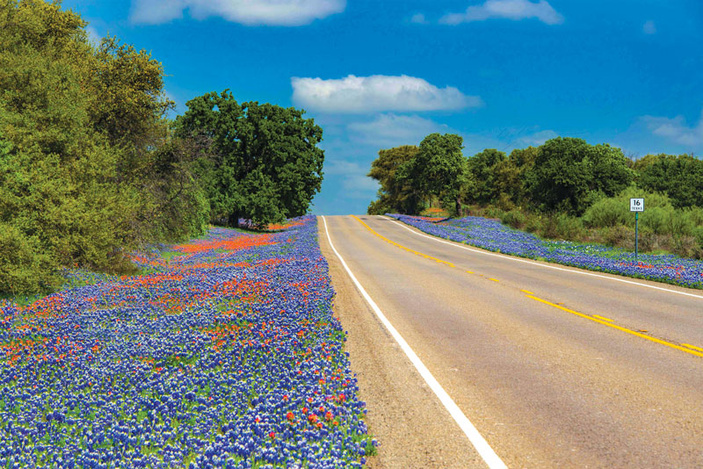 Mowing and planting seeds to encourage wildflower growth along state highways, such as Texas 16, have been part of Texas Department of Transportation policy since the 1930s. Photo by Mark Stracke

For state highways to put on their renowned spectacular show of color each spring, the Texas Department of Transportation has to know when — and when not — to mow.

Making those decisions is Dennis Markwardt, who has been director of Vegetation Management for the department for the past 20 years.

Managing wildflower mowing takes great restraint, a practice TxDOT has been following since the 1930s when a memo circulated instructing crews not to cut the wildflowers.

Markwardt and his crews keep 1.2 million acres — 900,000 acres of that mowable — of state road right-of-way awash in color. The secret to making those two chores work together is timing. Mowing at just the right times enhances wildflower and native vegetation growth.

While wildflowers such as the bluebonnet are beautiful in bloom, once their color fades and the plants die back, they aren’t as attractive. Despite the bedraggled look, that is not the time to mow. The flowers need to go to seed first, a natural process that can be disrupted with disastrous results if the roadways are mowed too early.

Over his 30 years of experience with TxDOT, Markwardt has learned to set aside areas that should not be mowed until after seeding, usually in early summer. He also designates “no mow” areas that a blade never touches. These stretches become habitat for a number of species, including ground-nesting birds, small mammals, and pollinators — particularly monarch butterflies, which migrate through the state. Wildflower roadsides get a second cutting in late fall after the monarchs have moved on.

The fall cutting greatly benefits the spring wildflowers, Markwardt said. It cuts back old, dead plants that might otherwise suppress wildflower growth, stealing water and nutrients from the soil.

TxDOT also promotes growth by seeding, especially in areas of road construction and repairs that have left right-of-ways bare. In fact, wildflowers often establish themselves more quickly and efficiently on a patch of disturbed land than in grasses.

However, mowing and seeding is all Markwardt and the TxDOT vegetation team can do to encourage a great wildflower season. The rest is up to Mother Nature.

“It still depends on rainfall,” he said. “How much and when.”

The best wildflower months in Central Texas are March, April, and May, though, in some areas, blooms can be found all summer long.

“That’s one of the great things about Texas: You get great shows,” Markwardt said.